Where were you on the day that President Kennedy was shot? 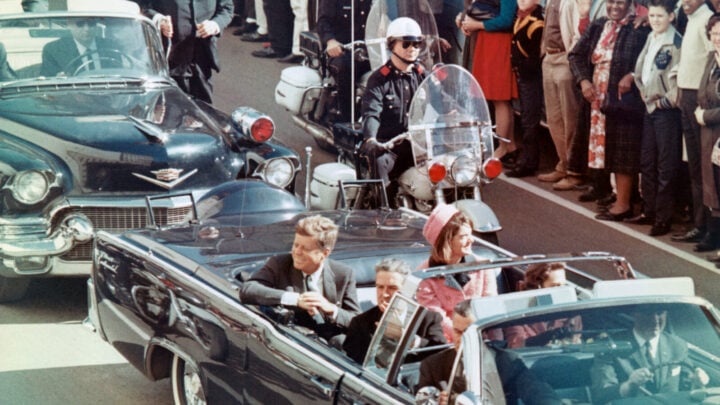 It was November 22, 1963. It was a warm summer day in Christchurch, New Zealand. I was ten, wearing a white nylon frock, ankle socks and a sailor hat. I was dressed up because I was my sister Rosemary’s bridesmaid. She was a young 19-year-old bride marrying her older fiancé Stanley, against my staunch Catholic father’s wishes. My dear old mum and her cronies in their crimplene ensembles and hats assembled for a photo. Rosemary looked beautiful in her white frock, she looked like a princess to me. Stanley was handsome. Possibly his Mediterranean heritage, another black mark against his godless name in my father’s eyes.

Anyway, I can remember a cloud going across the sun. The park where photos were being taken was suddenly shadowy and dark. I felt a shift in the atmosphere. I remember that very clearly. Somebody came running across the park shouting “President Kennedy has been shot”. The old ladies murmured and crossed themselves, muttering amongst themselves like a bunch of harpies. I heard the words clearly ‘its a sign, a warning sign’. They looked at my poor sister as if she had made some massive cosmic error. I felt a sinking inside and my ten year old self created a memory that has never left. I will always remember where I was the day President Kennedy was shot, and so will most of us reading this. We all have our own memories of that day.

My sister is now deceased, after a long marriage to her devoted husband. She had the same mixture of blessings and sorrows common to many of us. But my mother always called her ‘poor’ Rosemary as if she carried misfortune-by-association around with her.

But there are the other important memory milestones in our lives. People often ask “Where were you the day Princess Diana died”. It was August 31, 1997. I was separated from my husband and living back in my home city when my neighbour came running in with the news. Although I was saddened, though I had not been a fan of the royals, I still wept as her sons followed her funeral procession. Then 9/11. I was sharing a house with some friends. When I woke up to get ready for work, there was the indelible image of planes hitting the Twin Towers. That one hit home. September 11, 2001 had an impact on us all. It was shortly after that I decided to return to Australia. To the life I had left behind. I can still see the shocked faces of my flatmates as we saw evidence of our world-changing before our eyes.

We tend to measure our memories by events that impact our emotions. Events that shake our sensibilities. Events that make us ponder what our place is in-the-world, and what we are here for. In these last two years, many important people have died, and also tragic world events have occurred. However, I tend to not have the dates of these imprinted upon my memory. That may be because they are all too common; or maybe I am becoming desensitised.

But, mention icons like John Lennon, or Elvis Presley, and most of us over sixties will get a little nostalgic welling up of emotion as we remember where we were; as we recall the day of their passing. So where were you the day President Kennedy was shot?

So where were you the day President Kennedy was shot?