Are you being served? Remembering personalised customer service 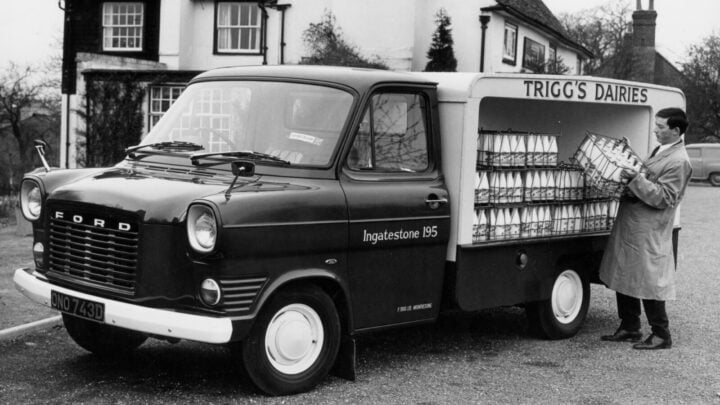 Services to the door included the milkman, who brought fresh milk or fresh cream in bottles. Source: Getty

Whatever happened to the personal customer service of years gone by? Most of it came to an end with the spread of big supermarkets and shopping centres around Australia from the early 1960s. Self-service stores with products stacked on shelves and shopping trolleys meant the end of an era when the customer was served on a one-on-one level.

Shopkeepers of that bygone era not only knew all their regular customers by name and looked after them personally but, as a service, delivered the order to the front door. Other services to the door included the milkman (many still using a horse and cart for daily deliveries until the ’70s), who brought fresh milk in bottles or fresh cream in half-pint bottles, the baker, who delivered fresh bread every day, and the ice man, who would place big blocks of ice right into the ice chest.

There was also the butcher, who brought fresh meat, the greengrocer called in a big green truck with fresh fruit and vegetables in season, the ‘rabbito’ would come with “dressed” rabbits for 1/6 a pair, the farmer supplied fresh eggs twice a week, the postie delivered mail twice in a day, and the paper boy, who, if he accidentally missed you, personally fetched a paper later in the day.

Catching the tram or bus into town, a conductor sold and punched your ticket or, if you had to catch the train for a longer journey, a porter was available to carry the bags and place them in the luggage rack for you. In the city, department stores provided multiple shop assistants to cater for every need. Many of the larger emporiums had a concierge to open the door as you approached, and there was a lift driver operating the elevators, calling out the merchandise available on each level.

Remember when the banks gave personal customer service? No matter what was needed, there was always a teller or someone to help. Back in the day, most people had a personal relationship with their bank manager. Banks today have led the charge in completely dispensing with personal service, to the point now where some banks will even include extra costs for a teller’s service.

Almost every item purchased back then was repairable, from electrical to mechanical. Small repair shops were scattered throughout the suburbs, offering to fix anything from a broken transistor radio, television set, kitchen gadgets, toys, bicycles or whatever was broken.

In today’s throwaway world, it’s fascinating to recall how, if the radio or TV set was “on the blink” or if the washing machine needed a new part, it was fixed by a repairman. He probably ran a small local business and supported his family by fixing things that now would most certainly be thrown out in the local hard rubbish collection.

There were other people who would call on an occasional basis offering services too — such as the man who would knock on the door once every six months and offer to sharpen knives and scissors. He had a buckboard with all sorts of sharpening devices attached, and would cover the whole city, going door to door offering his services.

A gardener came about once a year to prune and shape the backyard fruit trees, which provided apples, peaches, oranges, apricots, nectarines and quinces.

The Rawleigh’s man was also an irregular visitor, stopping by with his case full of liniments and ointments, ideal for the home medicine chest. He also carried hair ribbons and other affordable trinkets for the lady of the house to purchase.

It used to be that the lifeblood of any business was its ability to create and nurture a personal relationship with customers, creating an atmosphere where the patron felt they were valued and appreciated and in turn rewarded the business with loyalty and regular custom.

Now it appears that businesses, especially big corporations, have completely lost sight of service in the scramble for ever higher profits. It seems that companies have adopted the American corporate model, which is to sack staff and screw the customer, make as much money as possible for the shareholders, pay the CEOs millions of dollars and never mind the consequences.

But, to be fair, there are still some industries that strive to offer good service, but they are few and far between. And perhaps we, the customers, are partly to blame. In an effort to keep our own cost of living down we chase the cheaper products and brands, which of course generally come from a business with lower overheads, fewer staff and very little or no service. It’s a vicious circle, we want that wonderful customer service we had back in the ’50s and ’60s but we don’t really want to pay anything extra for it.

So, if you can still find a company or business, large or small, that offers good old-fashioned service in this day and age, treasure them, support them and be loyal to them, as you have found a rare gem indeed!

Which businesses have you found still offer excellent customer service?