Nostalgic Aussie sayings of the past 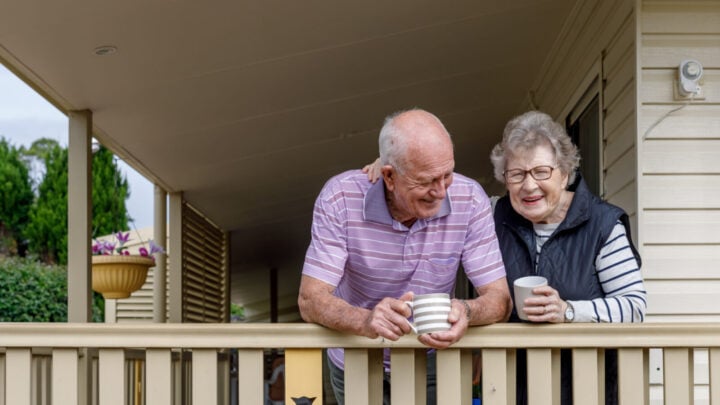 These familiar sayings will take you back in time... Source: Getty

Manouvering my dear 96 year old mum into the car the other day, she asked where we were going. Upon being told we were going to hit her favourite café for a half strength, decaf, flat white, made on soy with one sugar, and some date slice, she wholeheartedly exclaimed, “Whack-o the diddle-o”. Now that took me back.

How many of those sayings fling you back to your childhood? There were so many little phrases that mum and dad used that had way more depth and feeling than today’s utterances. You have to admit that “Whack-o the diddle-o” conjures up a lot more excitement than a plaintive ‘sick’ (the millennial version).

To put things into perspective, here is a little story with a selection of sayings, and alternatives written in italics, just to illustrate my point …

Andrew, tracing a circle in the dirt with his big toe, waited for his dad to emerge from the house. He cast a sidelong glance at the prize winning dahlias he had just ploughed through with his dragster … he was going to cop a hiding (cop a belting / pasting / licking, clip in the ear) for this.

Dad’s face was almost effervescent. “What the Dickens (what the blazes) do you think you’re doing?”

“Sorry, dad, don’t flip ya lid (don’t get your knickers in a knot, don’t have a cow). I’m really sorry. I was at the Milk Bar up the corner waiting for my milkshake and saw this widgie Sheila doing a five finger discount with a pack of gum. She saw me look and said, “Take a picture it’ll last longer”. I told her to pull her head in (sit on it, put a sock in it, put a lid on it) but suddenly, her boofhead bodgie boyfriend appeared and said I was “cruisin’ for a bruising”.

He was built like a brick outhouse but obviously not the full quid so I got the wind up and shot through, but not before he started peggin’ rocks at me. Well, I went like the clappers (like billio, like steam, like the blazes) all the way home, missed the driveway and come a gutser (come a cropper). See, I’ve got a bobby dazzler (corker, hum dinger) of a bruise coming up and I’m spewin’ ‘cos I missed getting my milkshake that I’d just forked over a bob for.”

“Strike me pink (strike a light) Andrew,” dad said, “slow down, you’re all over the place like Brown’s cows. You great bloody galah, even blind Freddy wouldn’t mess with Johnny. He wouldn’t work in an iron lung but he’ll get mad as a cut snake.”

From their position behind the orange browallia bush, they could watch unseen as a souped up Falcon XR GT cruised by, chucking a uey at the bottom of the street crawling its way back past. As the thumping exhaust faded away, they both emerged to watch. When it was well out of sight, Andrew yelled out, “Yeah, rack off ya hairy drongo!”

“Don’t s’pose you could give me a bob to get another milkshake dad?”

“Like smoke (be blowed), waddya think this is … bush week?”

Lower than a snake’s belly
A lick and a promise
Gee willikers
Well, I’ll be a monkey’s uncle
By jingo / by jove
Rough end of the pineapple
Like a stunned mullet
Carried on like a pork chop
Don’t come the raw prawn with me
I don’t have a brass razoo
Like a shag on a rock
I didn’t come down in the last shower
Fair crack of the whip, suck of the sav, suck of the sauce bottle
You little ripper
She’ll be apples
Your blood’s worth bottling
Off like a bride’s nightie, like prawns in the sun
Give it a burl
Didn’t come within cooee
Done like a dinner
Happy as Larry
Heavens to Murgatroyd / Betsy
Don’t know whether you’re Arthur or Martha
Talking through his hat/neck
What a little bottler
Not on your Nelly
You and what army?
Hunky dory
Knuckle sandwich

So, where was I? Ah yes, taking mum out – date slice and coffee ‘til we are full up to pussy’s bow! Sick.

To read more nostalgia articles from Pam Van Der Kooy, head here. Or you can find her brilliant nostalgia book Stuff We Had in the 50s and 60s at the Starts at 60 Marketplace, here.