‘Here comes the bride: Weddings have certainly changed since I married in the ’70s’ 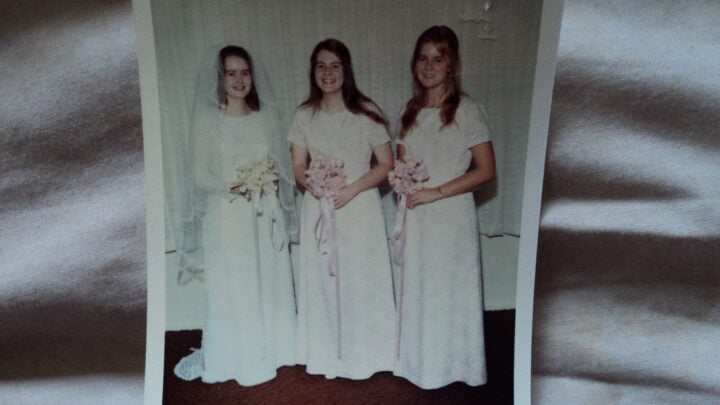 Julie shares a photograph of her sister's wedding in the early-'70s. Source: Julie Grenness

Here comes the bride. Ah, an old bridal photo of my older sister’s wedding. My younger sister and I were her bridesmaids. We were adorned like little Bo-Peeps, in pastel pink frocks. My late mum sewed every stitch of the wedding ensemble, including her own dress.

Those frocks were never worn again, as this was the early-1970s. We did not attend any teen parties where pale pink, floor length dresses were an acceptable norm. That was the custom, most weddings were the same, only different shades for frocks.

It was a lovely wedding, full of hope and optimism. My sister had a sit-down nuptial meal. There plastic chicken was served to women, while men had to eat roast beef. That was because, they were not, well, women. So they could not eat chicken. Made sense, sort of. Should we have sued the reception centre, due to such standards of plastic food and good behaviours?

I echoed my sister down the wedding aisle a couple of years later. Yes, a fry pan and a jaffle maker, so I could cook meals and make toasted baked bean, or ham and cheese, sandwiches for supper. Now that was cuisine! It was life in the ’70s.

I married into an Italian family. The weekends were surrounded by his family and friends. I was warned not to ‘let myself go …’! That is, I was not supposed to get fat or lazy, or I would lose my man. Well, hello there.

Along came the disco scene, where John Travolta was the star of the Bee Gees’ music. Great film. All the good old Italian boys thought they were Australia’s answer to Travolta, looking good in his jocks. I looked at my husband strutting his disco steps with the boys at a party. Who had let themselves go? Mamma’s homemade pasta and pizza had become a range of similar pot bellies, and once groomed hair styles were mullets, combed over their typical bald patches. Adorable!

After the divorce, I did keep my fry pan. The Bo-Peep wedding frock disappeared to an op shop some years ago, quite retro. On the flip side, my sister’s husband still loved her when she was 64, and beyond. Ain’t true love grand? Here comes the bride, in tales of Bo-Peeps!

What was your wedding like? Do you remember the gifts you received?