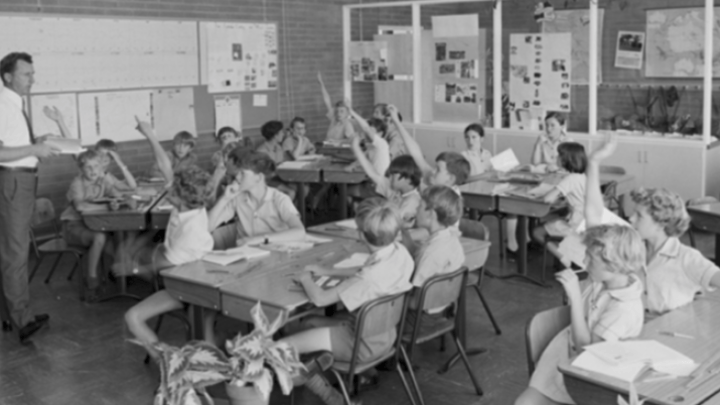 Baby Boomers would remember marching into class each day as kids. Source: National Archives of Australia

Compared to kids nowadays, Baby Boomers had it tough at school, there was little play and discipline was a top priority. Getting a smack on the hand with a cane as punishment was common, and lining up to march into class was a part of everyday school life during the 1950s and ’60s.

Millennials may consider it far too extreme, but even over-60s, who experienced these different times, are grateful for the strict rules they had to follow, claiming it really pulled them into line and made them understand what it means to be respectful of others. Though, they probably hated it as kids – especially on the sweltering hot days when they had to stand in line, with the blistering sun beaming down on them as they sang ‘God Save the Queen’.

But, it was a tradition that had to be followed. Each school had its own rules, but generally students would have to gather outside in straight lines at the start of the day before classes started for an assembly. Hats and sunscreen weren’t required and sometimes the sweat would start to drip off your face as you patiently waited to sing.

It might be that if it wasn’t for these weekly gatherings, students would never have learned the national anthem until much later in life. Many people credit their ability to flawlessly recite the anthem to the constant repetition that basically imprinted the lyrics into everyone’s mind. However, this essentially became useless for Boomers as the national anthem back in those days was ‘God Save the Queen’, which was replaced with ‘Advance Australia Fair’ in 1984.

After singing and standing for what seemed like hours, in sequences each line of students would turn and on the command of their teacher, march to their first class of the day. The constant chant of ‘left, right, left, right’ while making sure to keep an arm’s length distance to the person in front has been burnt into the memory of the many Boomers who learnt to march in perfect unison to show pride for their school and their country. For some, a band was used as well, with students marching along to the sounds of drums and fifes.

“[I]Marched into class after assembly at Thebarton Primary in the 1950 where we also saluted the flag and recited the oath, ‘I love my country,’ and sang ‘God Save the Queen’,” Rosemary Parker wrote in a post on Facebook group Adelaide Remember When. “At Adelaide High we had marching teams in school house colours which competed on sports day so that even non-sporting girls (like me) had a chance to be involved in something.”

“I attended Forbes Primary School and we had morning assembly in the quadrangle each day from memory and marched into class with our fife and drum band. I later learned to play the fife as I wasn’t allowed to play the drum. Boys only. I also joined the marching girls,” Jane Neve said.

While Deb Olson said: “I was the kid who used to turn on the tape recorder and microphone for the music that the kids marched to, and ‘God Save the Queen’ after that. I watched from behind the main glass door. I remember really loving it!” And Dave Holliday added: “Yes, I remember. I was the drummer who marched the students into the classroom in the morning, recess time and lunch time. Loved every moment of being a drummer. I was in grade 7, 1965, Pooraka Primary School.”

School has changed a lot since then. Marching has become a thing of the past, while the use of a cane as punishment is considered far too brutal for the young students. But, for Baby Boomers, it’s safe to say that the order of school taught them some important life lessons.

Do you remember marching into school? What are some of your memories from primary school?