Remembering the most popular toys of the 1960s 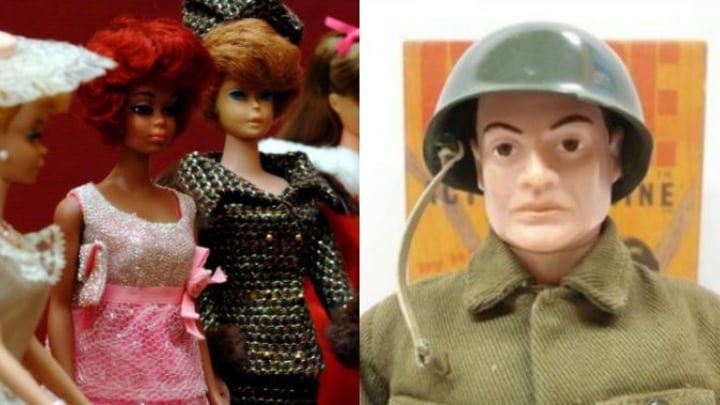 Barbie dolls were a popular toy in the 1960s along with G.I. Joe action figures. Source: Getty/ Flickr

To celebrate our upcoming 1960s-themed trip to Moreton Island in May, we’re revisiting some of our favourite nostalgic articles from over the years.

Click here to learn more about this unique over-60s holiday, or read on for a trip down memory lane…

While children may have unwrapped Christmas paper to find iPads and other technological toys this Christmas things were quite different back in the 1960s. Although Barbie’s and other dolls have remained popular toys for years on end, there were some other unique items that boys and girls alike were hoping desperately to own as children through that era.

Board games and even an Etch-Sketch were common presents under the Christmas tree along with the Rock ‘Em Sock ‘Em Robots that kept kids entertained for hours on end.

This creative board game first reached supermarket shelves in 1963 and within no time had become one of the most popular games for families and friends to play. It began with the two to four players working together to create a working mouse trap with things like a staircase, a bath tub, a seesaw and finally the trap at the end. Once complete the players turned on each other and tried to trap each others mouse-shaped game pieces. It was an exciting and nerve-wracking game as players awaited their opponents next move to see if they would be trapped.

It became so popular that it was later adapted into a game show on the British children’s television show Motormouth. Instead of trying to capture mice in traps, children were the object of the game on the life-sized board.

Every little girl throughout the 1960s was desperate to own a Chatty Cathy Doll. While there were many dolls available, Cathy was special and more life like as children could pull a string on the back and make her talk. It was first released in stores in 1960 featuring blonde hair in a short bob and blue eyes.

Over following six years Cathy transformed with versions of the doll with brunette and auburn hair released in 1962 and 1963. An African American doll with brown skin tone was also introduced throughout that time. As well as a change of hair colour further versions of Cathy were introduced including Chatty Baby, Tiny Chatty Baby, Tiny Chatter Brother, Charmin’ Chatty and finally Singin’ Chatty in 1965.

These fighting robot boxers were certainly on the Christmas list for little boys across the country throughout the 1960s. First manufactured in 1964, the toy featuring two robots, Red Rocker and Blue Bomber was a basic fighting game that kept children entertained for hours on end.

The aim was simple, use buttons on a pair of joysticks at the base of a platform to make the robots punch at each other. The winner was determined when the head of one robot was hit at just the right angle, overextending it away from the shoulders.

Over the years hundreds and thousands of the toys were sold across the world with the design remaining relatively the same until the ’70s. In 1974 an updated version was launched in conjunction with the release of the Star Wars movie.

These fun little plastic dolls with crazy hair were first created in 1959, quickly becoming a household toy throughout the early 1960s. Maker Thomas Dam came up with the idea when he was one Christmas unable to afford a gift for his young daughter. He carved the doll from his imagination and within no time other children across the Danish town wanted one of their own. The father created his own company called Dam Things with the dolls named Good Luck Trolls.

They made a resurgence throughout the 1970s and ’90s and were copied by a number of different manufacturers under other names. The unique looking dolls even made an appearance on the big screen in the 2013 DreamWorks animation Trolls.

Who could forget Barbie? The doll has been around since 1959 and still to this day is a popular toy among children with a flurry of different versions on the market. Back in the 1960s the doll had only just shot to fame and was a big hit with young girls. Everyone wanted to have a Barbie and her boyfriend Ken, who was introduced in 1961.

While Barbie has taken on many forms over the years, the very first one wore a black and white zebra striped swimsuit and ponytail. She was also available with either blonde or brunette hair.

It’s hard to believe the first ever version of Barbie only cost around $3 with some versions of the doll now going for up to $50. Over a billion have been sold since it first hit the shelves with further items including Barbie cars and houses popping up in the market throughout the last 50 years.

For the more creative kids, the Etch-a-Sketch was the perfect Christmas present. Created in the mid 1950s by French electrician André Cassagnes, the drawing toy began to fly off shelves in 1960 when it was mass produced by The Ohio Art Co.

Instead of drawing on paper, children were able to use its twin dials and erasable screen to sketch for hours on end. And when they were finished or simply wanted to start again they could just shake the plastic console and the picture would be erased. It was a much cleaner and tidier option for parents with no piles of pencils and paper in sight.

The thought of having their very own mini kitchen set was incredibly exciting for children throughout the 1960s with the introduction of the Easy Bake Oven. First reaching shelves in 1963, the original model featured an incandescent light bulb as a heat source making it that much more life like. The oven even came with packets of cake mix and small round pans which children could use to make a little cake by adding water.

A present of choice for many across the world, the oven was sold a total of 500,000 times in the first year of production. Four years later, more than 16 million had sold.

These miniature cars were certainly a favourite throughout the late 1960s after being introduced in 1968. While there are many different versions now, back then it all began with 16 types of the small toy vehicles which are known as The Original Sweet 16. The very first was a dark blue Custom Camaro.

Over the years car manufacturers even license Hot Wheels to make scale models of their cars, using the original design blueprints and detailing. While they were meant as a children’s toy, adults soon became interested in the products with many ending up with a massive collection.

One of the more recent and highly desired version of the toy was released this year featuring 2,700 diamond chips with rubies as taillights. It was announced as the four billionth and was worth around US$140,000 (AU$193,000).

While girls were playing with Barbie dolls and kitchen sets, boys were obsessed with the G.I. Joe action figures. Created by toy company Hasbro, the figures were initially modelled on the four branches of the U.S. armed forces with the action soldier (army), action sailor (navy), action pilot (air force), action marine (marine corps) and later on, the action nurse.

The toys were aptly named G.I. Joe after the acronym G.I. which stands for galvanised iron. This term was first used throughout World War I by American soldiers to describe incoming German artillery shells. Due to its popularity a series of films were also created with the first, G.I. Joe: The Rise of Cobra, hitting the big screen in 2009. A second film, G.I. Joe: Retaliation was released in 2013 and a third, G.I. Joe: Ever Vigilant confirmed for release in 2020.

First there was the Easy Bake Oven and then came Suzy Homemaker. The line of miniature toy household appliances was the dream for any child who had a love of cooking. Launched in 1966 just three after the widely popular oven, the Topper Toys invention included everything from a small working oven, a vacuum cleaner, a hair dryer, a blender and a refrigerator. A special Suzy Homemaker doll was also introduced a little later.

The cute little toys popped up on shelves around the world around the same time when women were considered the “homemakers”, responsible for much of the cooking and the cleaning. Sales went through the roof and, launching the Topper Toys creation into the second-most popular toy position after the Barbie doll.

Do you remember these toys? What was your favourite toy growing up? Leave a comment below!

Miss the 1960s? Join the Starts at 60 community at Tangalooma for a unique over-60s getaway! Tour the island by day, feed the dolphins at sunset, and unwind at night with 60s-themed trivia, dancing and a grand gala event. Learn more here.