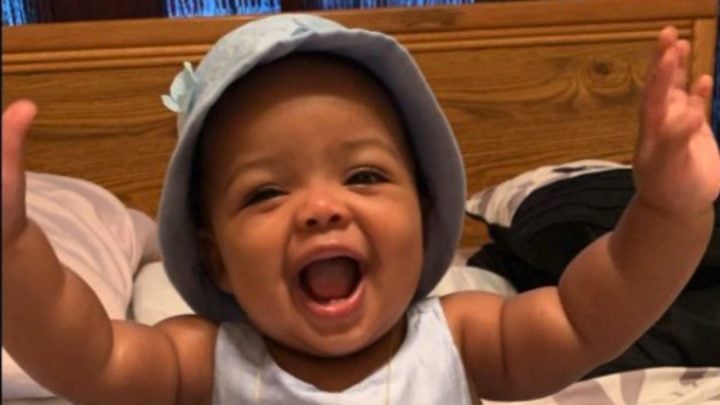 The mum posted photos of her baby dressed up in her old clothes. Source: Twitter/nova.

It’s not uncommon for mothers to save all of their children’s baby clothes, passing those sentimental items on to their adult children when they start having babies of their own. Now, a mother in the United States has made headlines after she dressed up her baby in the same dress and matching hat that she wore as an infant.

Taking to Twitter, the woman shared a side-by-side image of herself and her baby daughter wearing the exact same dress, explaining that her mother had been saving the outfit all this time.

She captioned the sweet post: “My mom [sic] saved my dress all these years just for this moment right here.”

My mom saved my dress all these years just for this moment right here 😭💜 pic.twitter.com/0I6zZGh72K

The tweet instantly received a flurry of likes and comments with some users sharing photos of their children in their own old baby clothes as well.

She wrote: “My momma [sic] did the exact same thing! I also have my 1 year old dress too for when she’s 1!”

My momma did the exact same thing! I also have my 1 year old dress too for when she’s 1! ❤️ pic.twitter.com/1i9ekpnnbK

Meanwhile, another commenter explained that she kept one of her favourite pyjama dresses for her daughter. Others were even inspired to start the tradition themselves, with one writing: “Awww that’s super beautiful I wanna do this for my kids! Definitely making it a tradition.”

Another added: “Now that’s not only insightful but adorable! What a precious memory! Now you should save it for your daughter!”

Awww yess 😍😍 i kept one of my favorite pj dresses just so i could have it for my daughter 😂😍😍 pic.twitter.com/2q1LbUHOr3

Passing down baby clothes to future generations is nothing new and has been a long family tradition for some people. Starts at 60 reader Dianne Andrews revealed her family have been using the same christening robe for decades.

“There is a christening robe in my family, which I borrowed for my girls, which is over 100 years old,” she explained. “My mum was a good knitter and made cute jacket, bonnet and bootie sets. I kept the pink and white striped one for my grandchildren but they both had boys. One more yet to have her own.”

Meanwhile, Robyn Berry Luke said she still has the hospital wrap she brought her daughter home in, writing: “I have kept my daughter’s shawl I was still knitting when I went into hospital to actually have her. I have it in a special box which also has my own dolls and dolls clothing from 68 years ago. I also have kept some of the toys from my son who is now 34 and also my daughter. They bring back amazing memories of when they were little.”

Reader Vivienne Beddoe added: “I still have my baptismal dress and bib. I have kept two baby dresses of my daughters and one baby shoe. And a dressing gown made for a third birthday present. I didn’t pass the clothes on to my daughters but usually passed them on to friends.”

Have you kept your children's baby clothes? Did you pass them on?