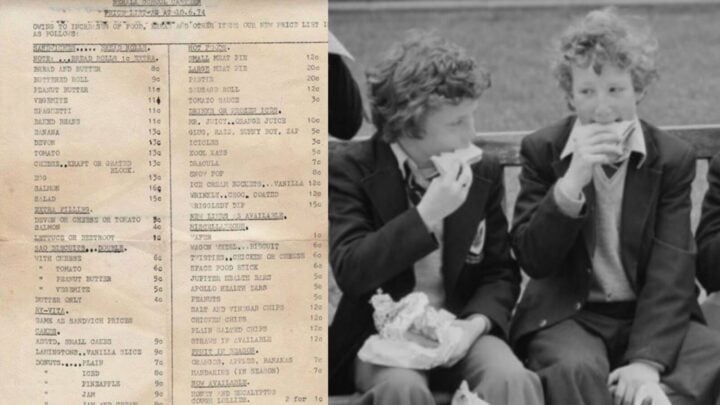 Remember when nothing on the school tuck shop list was over a dollar and you could snag a tasty, homemade vanilla slice for just nine cents? Those were definitely the good old days for kids heading to school in the ’60s and ’70s who now likely look back on meat pies and icicles with fond memories of simpler times.

As a kid, the big or little lunch order was by far one of the most exciting times of the day. And with food being such a massive part of the reason as to why kids loved school so much it’s no wonder Aussies get so nostalgic when they think about certain meals.

A snapshot of an old canteen list that went viral on Facebook had everyone thinking back to the days of enjoying a tasty, tuck shop lunch for next to nothing! The list was posted to Auburn-Lidcombe Heritage, History & Memories Facebook page and showed the foods and prices of the Berala school canteen back in 1974.

With everything from buttered bread rolls to space food sticks to jam-filled donuts all up for sale for what would now be known as chump change, the old-style list was definitely a much needed walk down memory lane. In fact, the most expensive thing mentioned was a meat pie or pastie worth 20 cents followed by a fancy salmon-filled bread roll for just 16 cents.

But don’t worry if the parents didn’t hand over enough coin to spend big at the canteen as you could also get the cheaper treats with classic cream buns costing just nine cents or a quick and easy Sao biscuit with cheese and tomato for six cents.

Despite the prices appearing low in this day and age, some commenters weren’t too sure about how cheap the canteen actually was for the decade with one writing: “Actually that’s a pretty pricey tuckshop [sic]” while another said “I remember when a pie hit 20c. My first thought was, “who brings that much money to school?””

Another commenter said the cheap prices all of a sudden put money woes into perspective writing: “That would why when I asked my mum for $27 for a ticket to see Cocker she said no. Puts it into perspective.”

For a bit more of a trip down memory lane, Starts at 60 blogger Julie Grenness recently recalled her time as a child hanging around the school tuck shop line telling jokes and watching teachers get cross over kids holding the line up.

“Did we have enough pocket money left for a cake?” she wrote. “This was a life-changing decision, to choose an egg custard pie sprinkled with nutmeg or an apple turnover filled with artificial cream. The interchange for choices was a cream bun with cream and a dab of jam or the genuine Wagon Wheels, about three times the size of later versions.”

Do you remember when the school canteen was this cheap?