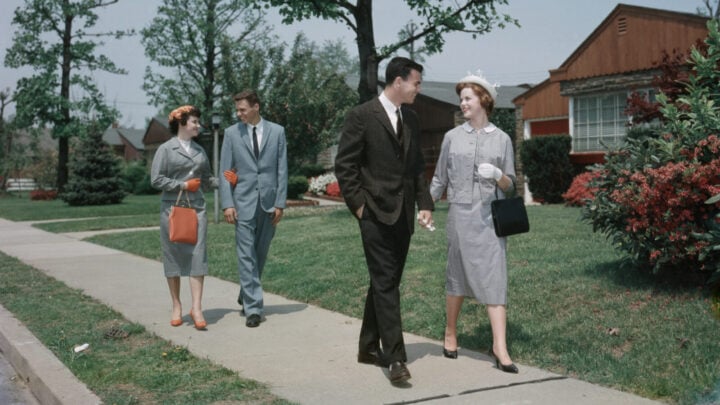 Couples out and about, circa 1959. Source: Getty

There was a time when people always dressed in their “Sunday best” whenever they went “into town”. Looking back at old photos taken during the late 1940s and 1950s, the thing that strikes me most is how well-dressed everybody is.

I vividly recall how my mother always wore her best clothes, including a hat and gloves, when stepping out to go shopping or visiting friends when I was a child. That was in the 1950s, but people continued to dress well right through the 1960s and early ’70s. Men wore a suit with a tie, while women wore their best dresses, especially if going out on a special Saturday night occasion.

In 1973, the fashion writer for the leading women’s magazine of the day, the Australian Women’s Weekly (AWW), looked at the changing fashions of the latest generation. Here’s part of what she wrote. “In the beginning, it was all Paris. Not just in Australia, but all over the world, Paris was the ultimate couture right from the 1920s. However, fashions started to change after the end of World War II. A younger age group wanted cheaper clothes, the ‘ready-mades’ off the peg. And as the new materials with the synthetics made their appearance, clothes became more practical and more affordable. Fashions were suddenly far less formal; many did not even require a hat.”

Indeed, hatters suddenly struggled to find work. Department stores with whole floors devoted to millinery began instead to tuck them into a corner as the mass-produced designs became more acceptable.

The ‘Girls and Maids’ section and ‘Misses and Matrons’ departments all disappeared by the 1970s, and the teenager emerged to add a new dimension to style. The first juvenile fashion parades were held in 1965, to introduce a new era of trends for younger tastes, and for teens with money to spend on clothes.

For women, corsets underwent drastic changes. The bone four-suspender rust-proof constrictors that grandma wore became (lightly boned) corselettes, the featherweight girdles of the 1950s, and then the foam-contoured foundations of the 1960s gave way to pull-on girdles of nylon-stretch with nylon cups. Brassieres went the same way, from the foam contouring attached cups to the strapless and finally to the natural look of the 1970s.

Bloomers stayed bloomers right up to the 1940s. From bloomers they became Milanese knickers and by the 1960s they were panties, gussies and pantalettes in every colour imaginable. By the 1970s, they were on sale in neat cellophane packets as disposable paper briefs. (For more on knickers throughout the ages, read our other article here.)

After World War II, skirts ranged from dirndls (in the 1940s) and peg-tops, through to Dior’s ‘new look’ in the late 1940s and shorter looks decades later. Fashion seemed to move quite quickly from the full-skirted petticoat vogue to the mini-skirt.

Hats for men started to disappear in the late 1950s, but the suit remained the number-one fashion item until the 1960s. In 1963, the stores were advertising “revolutionary new iron-less cotton shirts for men” and, by the ’70s, the guys had blossomed into peacocks, with a flamboyant array of fashion in colours never seen before – or since (thankfully)! As the AWW’s fashion writer concluded, “The men have the edge on this unisex business. They’ve acquired a taste for the flamboyant and the women are only trotting behind.”

Times have continued to change. I was walking through town on my lunch break a few days ago and I think I saw two men in smart suits but not one woman in a hat and gloves. It was mostly very casual attire and jeans (in some cases torn and dirty) and other assorted clothing, some of which would probably not have even been worn to do the gardening in the 1950s and ’60s! It seems that dressing down is the new dressing up!

Mind you, I must say I appreciate not having to wear a tie everywhere anymore! And as social media blogger Mihailo Stojanovski mused recently, “I think these days the lifestyle has changed so much, due to the increasing omnipresent feeling that we must live in a casual way in this fast-paced world of ours. Thus we’ve created a whole laid-back thing that has spread into fashion. I see nothing wrong with the way we now wear things. Different times, different lifestyle, and that’s okay. It’s called progress.

“Who knows, 100 years from now, everyone might walk around naked and laugh at us … and think, ‘Oh my God, look at them, they all wore clothes back in the day! How bizarre!'”

Do you miss the more formal fashion of yesteryear, or do you enjoy the casual style of recent decades?