The image being created of retirees as miserly super-hoarders is inaccurate – as an examination of the data underlying the claims make clear. Source: Getty

On January 22, the Australian Financial Review featured a front-page article with the headline ‘Ever more’ super gets hoarded: Hume’. In the same issue, Jane Hume, the minister for superannuation, financial services, and the digital economy, provided an opinion piece that claimed ‘Safety nets let frugal retirees spend savings without a super rise’.

The AFR followed up the next day with an article headlined ‘Push for seniors to dig deep into super nest egg’. “Superannuation Minister Jane Hume kicked off a national debate about retirement incomes this week … She said people needed to be more confident to spend – not hoard – retirement savings to improve living standards throughout their lives …,” John Kehoe reported. “The government’s retirement income review led by former Treasury official Mike Callaghan identified that many retirees died with most of their wealth intact and did not run down their super or tap equity in their home, so they might be saving too much.”

On January 31, the minister doubled down, with The Sydney Morning Herald reporting that Hume told a financial services event that many Australians were “passing away with most of their retirement savings intact”.

You might have read a similar article right here on Starts at 60. It is clearly an important national question.

Wealth includes the home and other assets as well as super, but because the regulatory, financial, market, liquidity and social issues in relation to housing differ so much from those applying to super, my article here focuses only on super. I wanted to investigate whether Senator Hume was right.

Is it true that retirees hoard their super?

I found the answer to this important question came in three parts:

Senator Hume’s view, as presented in the AFR opinion piece and reported in the articles mentioned , is rather different from my own findings, but it is strongly supported by the Retirement Income Review (RIR) – Final Report released on November 20 by a panel chaired by Michael Callaghan.

A couple of quotes give the flavour of the RIR report’s attitude (page numbers refer to the pdf version). On page 23, it says that “most people die with the bulk of the wealth they had at retirement intact”. On page 56, it goes on to say that “the evidence suggests that retirees tend to hold on to their assets … Alternatively they need not have saved as much”.

It seems the way is being paved towards downgrading the level of compulsion applying to super contributions for pre-retirees and tightening the requirements for withdrawal in retirement. Such changes may be damaging to retirees, however, if they are not soundly based on facts and understanding.

This is why the counter-arguments to the claim that super is being hoarded by retirees need to be fleshed out. I’ll look at nominal hoarding first.

Superannuation kept in an allocated pension account, also known as an account-based pension and one of the most popular ways for Australians to create a retirement income stream, is subject to minimum annual withdrawal limits.

Provided that investment returns can keep up with the minimum withdrawal rates from an allocated pension, it is possible, with care, to leave the capital in nominal dollars untouched and take only the investment returns as income.

(It’s important to understand, though, that nominal dollars is a way of saying ‘today’s money’, in that it tells us in bald terms the actual amount of money involved. It doesn’t tell you how the value of that money may change due to the impact of, for example, inflation over time).

To leave even the nominal balance untouched does become increasingly difficult, however, beyond age 80 as the minimum withdrawal rates increase well beyond 7 per cent – the rough average you may hope to receive over the long term in investment returns on a super balance. It may be difficult to leave the nominal balanced untouched at much younger ages if investment returns are lower than that rough average.

So, hoarding of nominal superannuation capital throughout retirement is possible, but only for those who die early or invest well.

As I mentioned above, nominal dollars provide a poor base for comparison across long time periods. Real values, indexed to wages, relate much better to community living standards.  If the super account maintains its nominal value for 15 years, it will have lost almost half its real value, assuming 4 per cent per annum long-term wages growth.

Successfully hoarding real capital between 65 and 74 years of age would require nominal investment returns, net of fees, consistently above 9 per cent. This is possible during good times, but almost impossible in bad times, and it becomes far harder as the superannuant ages further.

There is a simple reason for that; the minimum drawdown rates are designed to prevent long-term hoarding, while enabling those who live a long life to continue to benefit from their savings.

As you can see from the above, it’s easy to trot out simple examples to show that capital can or cannot be preserved in various scenarios. From a policy point of view, however, what matters is the true average behaviour of all retirees.

How real retirees use their super

In support of the claim that retirees do not consume their capital, the RIR report cites a 2020 paper released by the Tax and Transfer Policy Institute at the Australian National University, and re-plots a graph from that research paper, which appears as Fig 5A-12 on page 434. That graph shows average superannuation account values at a point in time, as a function of age, thus neatly dodging the inflation issue!

At first sight, that graph seems to confirm the hoarding thesis – although some drop-off in account value can be seen for ages in the late 70s.

On page 434, the RIR report says that “superannuation assets have tended to grow in retirement (Chart 5A-12), instead of declining as would be expected if assets were funding retirement”.

The Tax and Transfer Policy Institute made a similar point in its own paper, saying there was “little evidence that people, on average, run-down superannuation balances after reaching the preservation age” and referred to its own graph.

Both comments support the hoarding hypothesis, but closer inspection reveals that the original graph pertains only to the average of non-zero-balance accounts. In other words, those accounts that have been totally withdrawn have been excluded!

When numbers are misleading

This is an example of survival bias. A similar situation can arise when testing share investment criteria against past data, if consideration is limited to companies that are still in business. Ignoring those that have failed can be an expensive mistake because, of course, the collapsed companies will impact any finding on the soundness of the investment criteria.

In the present case, the survival bias may or may not matter, depending on one’s purpose; but when the purpose is to establish that retirees hoard their super, it matters a great deal.

Fortunately, another table in the Tax and Transfer Policy Institute research provides valuable additional data; average super account balances are listed there both for accounts with non-zero balances, and for all accounts, segregated further by gender. Those data allow the survival bias effect to be both quantified and eliminated.

And I found that the impact was substantial: roughly 80 per cent of males are shown as having exhausted their accounts by age 80.

To make the impact of the account survival bias easier to see, I created the graph below () that plots data from the Tax and Transfer Policy Institute table for all accounts and for non-zero-balance accounts. It confirms that, based on this table of data, average super balances for both men and women decline steadily throughout retirement when zero-balance accounts are included. 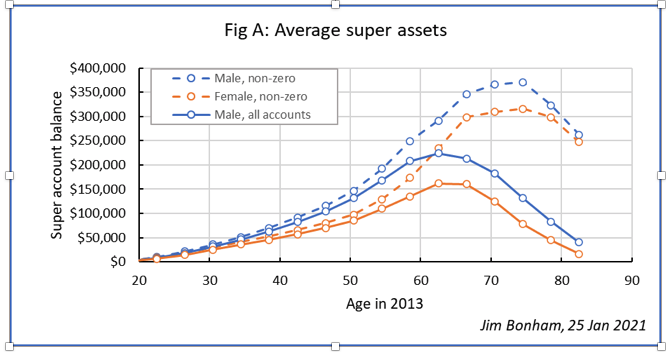 A discussion about how fast, if at all, people consume their superannuation in retirement must include all accounts to be meaningful.

As shown in the two solid all-accounts curves in Fig A – blue for males and orange for females – there is a strong and steady fall-off in the average all-accounts value throughout retirement, at least to the early 80s, by which time most or all of the average balance has gone.

The notion that retirees, averaged across the population, hoard their super is thus contradicted by the facts. That is an important conclusion when considering superannuation policy.

Save Our Super, founded in 2016 by retired Victorian barrister, Jack Hammond QC, lobbies for certainty in superannuation policy, so Australians, many of whom are compelled to contribute a portion of their wages to a mandatory super system, can trust the government to treat them fairly when it makes adverse changes to the superannuation system.