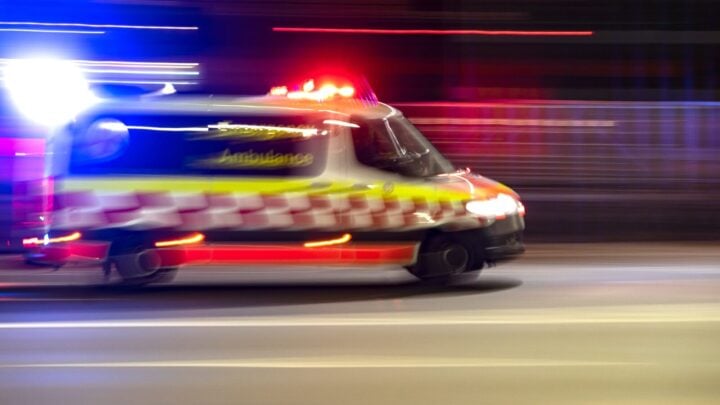 Forget the flowers and chocolates! This was a Mother's Day Karen will never forget! Source: Getty Images

Never in my wildest dreams would I have imagined opening my eyes and seeing six SES volunteers lugging me up my steep drive on a board and into a waiting ambulance. Neither would I have imagined myself being gawked at by the neighbours attracted by the sirens and bells. The ginger-haired kid next door must have found me more interesting than the cartoons.

How did it happen? Well, I had a fall.

One minute I was walking on my tiled floor and the next minute I was flat on my side, gasping for air and crying in pain. I still can’t understand why or how it happened, but happen it did.

I crawled commando style to my phone and rang a friend. We put ice packs on it after I crawled onto the couch. The ambulance was called but deemed it was not broken. However, a day later when getting out of bed I heard a snap, saw stars and my foot just dangled there. In a sweat I rang the ambulance, which arrived promptly. The paramedics could not work out a way to get me out of my tricky doorway and up the steep driveway, hence the SES was called.

Eventually mellowed by morphine, I was admitted to emergency and discovered I did indeed have a broken hip. As I recently learned I have osteoporosis, this was a problem.

A pain blocker was inserted and I achieved some sort of pain relief. The next day after a harrowing night of bedpans (they forgot to insert a catheter until later) I was finally operated on at 9:30pm on Mother’s Day. My gift was a titanium hip.

I woke muttering and confused to a kind nurse looking after me. And therein my ward recovery journey began.

It’s interesting how close you get to your temporary ward mates — two men and a woman recovering from surgery. I saw more bare bottoms barely covered by white gowns in that ward than I have seen in a lifetime. Yet, it was night-time when the true horror began.

The symphony of snoring (including me) was outstanding as we all snorted, snuffled, hacked and puffed throughout the night. The winner was an elderly gentleman next to me whose major triumph was achieving a bowel motion for which he received a round of applause. This was necessary for his release home.

I yearned for peace the following night, but I then had three male companions and the snoring was even worse, accompanied by the foulest odour Hell could produce. A combination of drugs and hospital food produced the most putrid of wind — or in the language we use — the room was full of farts. The smell was so bad I hobbled to the shared bathroom and spayed the toilet spray to try and mitigate the pong. I desperately wanted to open a window, but that was not possible so I put the sheet over my head and tried to imagine a field of spring flowers

Finally after being released I am home and recovering — enjoying the kindness of friends and family and having an unexpected break from my usual commitments.

Learning to be still, to rest, to obey the physio and only do the movements I’m allowed to is hard. I am learning to accept the washing may not get brought in, and there is an accumulation of dust behind my furniture. However, for the first time in a long time I am sitting patiently, enjoying the sunshine coming through the windows, talking to my cat, reading, listening to talking books, dreaming and having lovely leisurely conversations with whatever visitor I have. It was an unforgettable Mother’s Day and the gift I received of a titanium hip was certainly unique.

Have you experienced a fall at home, or some other injury requiring an ambulance?