This One Life: Making a new path to a different future 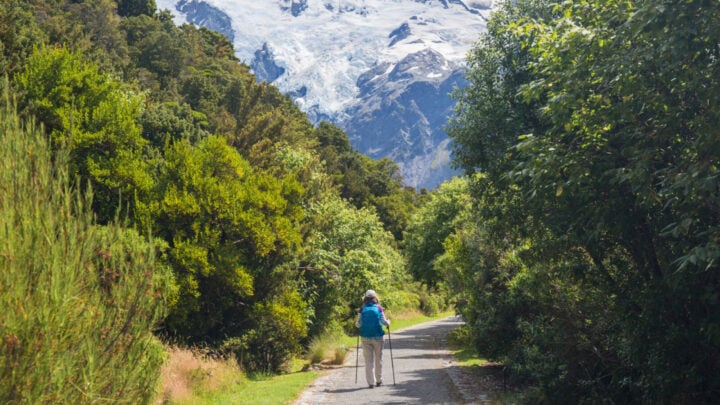 Global nomadism was becoming a thing when I sold up and left Australia in 2010 with a one-way air ticket. My fellow digital workers in coffee bars and cafes all over the world were mostly millennials, though, not greying baby boomers. At 58, I wasn’t a cashed-up retiree or widow, or one-half of a couple of bucket-listers. I was a barely solvent, single, self-employed book editor who loved to travel. On a seven-week stay in Europe in 2007, I’d realised it could be a lifestyle.

During that trip, on a fourteen-day trek around Mont Blanc, our group of hikers had stopped for lunch at a hotel that had once been grand but was now decayed. I visited the old-style squat toilet. Around my ankles was one of the two dozen pairs of paper underpants I had brought along to cut down on laundry. Every time I pulled them down or up, they would stretch, becoming so voluminous by the end of the day that it was difficult to stuff them back into my walking trousers.

In the stall, while trying to extract some tissues from my pocket to use as toilet paper, I overbalanced and fell forward. It seems I hadn’t latched the door properly and it gave way under my weight. I pitched forward into the main restroom area, my big-girl pants still around my ankles, my bum bare.

“Thank you, thank you,” I said to the universe when I found the bathroom empty. I waddled backwards into the stall and firmly latched the door.

Later in the day, in a village market, I spotted a stall selling lace knickers. I bought a dozen pairs, including one in bright orange, and threw away what remained of my stash of disposables. At our group’s farewell dinner later in the week, I would be named ‘Best Knicker Shopper at High Altitude’.

When I left Australia a few years later and became a full-time nomad, in my suitcase were those knickers (for luck), clothes and footwear suitable for different climates and activities, and a well-used corkscrew. On my back was a monkey I’d been trying unsuccessfully to shake for twenty years: a drinking habit that was affecting my physical, emotional and mental health. I was an under-the-radar, high-functioning, grey-area drinker who was using white wine to numb old hurts.

If I threw myself out into the world without a safety net, I figured I’d be forced to be my best self. Nothing else had helped me to overcome my drinking problem: not marathon running, not slogging through mud along the Kokoda Track, not trekking in the high Himalaya.

The voice in my head that had been asking for two decades whether my drinking was normal, whether I drank like a normal person, was now too loud to fob off with false promises of “I’ll sort myself out when I’m feeling stronger”. I had reached a turning point. There was no longer any joy in my drinking. I drank mostly alone – without witnesses – rather than in company. Drinking was now causing me more anxiety than I was using it to medicate.

What sort of future lay ahead if I continued along my current path? It was time to make a new path to a different future.

During a return visit to New York in August 2011, a massive hurricane bore down on the city. I took it as confirmation that the time had come for me to surrender. I stocked up on all the necessities for weathering the storm over the weekend – food, batteries, bottled water, candles – and three bottles of Chilean white wine. I would have exactly the amount I wanted to drink over the two nights of the lockdown. It would require restraint: if I drank more than half of the second bottle on the first night, I wouldn’t have the six glasses I needed for the second night and would have to reschedule the whole rigmarole.

I didn’t plan to obliterate myself. I was frightened enough without having to scare myself further. If I could drink exactly the amount that I needed to achieve conscious numbness, I could say goodbye to my increasingly unreliable companion of many years with some dignity before starting my sober life.

It was the end. Ahead lay a different future, one that didn’t include alcohol. What might it look like and feel like? I had no idea, but I would make my way towards it one sober day at a time.

I had gone as low in my own estimation as I was prepared to go. My life hadn’t ended in the gutter, though I’d sometimes fallen in one. I hadn’t lost a driver’s licence for drink-driving, or a husband and children through alcoholic neglect. I didn’t need a stint in detox or rehab. I still functioned well in areas that were important to me. But every drink came at a cost. It eroded my dignity and self-respect. It caused me to lie; to feel shame and guilt, anxiety and fear; to withhold my real self from people I loved and wanted to be loved by.

“Enough, already,“ said my inner New Yorker. It was time to accept that, from here on, I wouldn’t be able to live an authentic life, comfortable in my orange knickers-clad skin if alcohol were a part of it. There could be no more moving the day of reckoning to the first day of next year, or of next month, or of next week. Tomorrow was of no use to me. I had only today.

Like a diver on the ocean floor who could see, far above, the shimmer of sunlight with its promise of air, I would have to ascend from the depths slowly and patiently if I were to decompress safely.