‘Then the drama unfolded: What happened when I moved into my new house’ 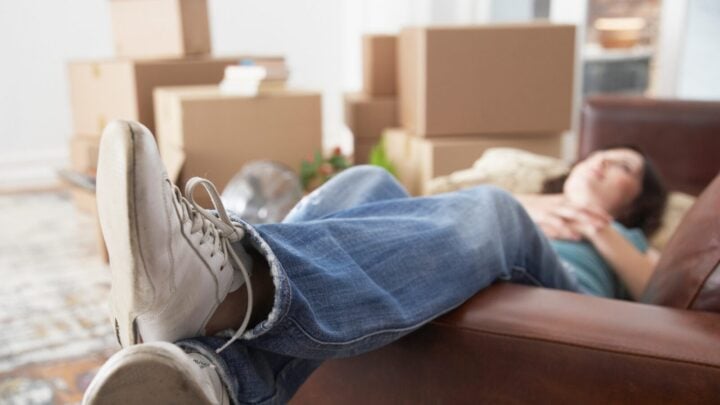 Heather thought downsizing would be a good idea, but it was exhausting! Source: Getty Images

It was all planned — ready to go and a prize at the end of it. The plan was to ensure a smooth transition from one household to another. My old place was irritating me with its yearly pest inspections, regular gutter cleaning, untold gardening jobs and routine tree lopping. Not to mention the flooding underneath the house when it rained. I was sick of it all — not that I performed these tasks myself, but they had to be arranged and paid for. I was sick of living in a house, so I went looking for an apartment.

I was lucky. I found my precious new home within three days. It was a large three-bedroom property with two bathrooms and a lovely view. Secluded in a leafy suburb, I was pleased with the choice. The move was planned for a Friday and the removalist came round at 9am.

It all went smoothly. As I’d directed, they packed the furniture into their van and followed me over to the new place. I was particularly lucky in the new apartment as the previous owners had left me their washing machine, dryer, dishwasher, desk, television unit and donated me their induction cooktop as well as two ovens. I felt as pleased as punch.

The next morning I negotiated the boxes that were scattered around the house and decided to put a wash on. I put some clothes in the washing machine and shut the door.

After half an hour or so, I went back into the laundry to find water pouring out all over the floor. Since the washing machine was fixed into the floor, all I could do was press the stop button and ring a plumber. After nearly three hours the plumber arrived to discover a split hose just below the sink. (Happy welcome home present, Heather!)

That wasn’t all. I tried my television — the old TV that had worked perfectly at my previous residence suddenly developed the hiccups. It would only play Channel 9 and SBS Food; certainly a change from its usual fare of ABC and Channel 7.

I was exhausted, but the terrible times weren’t over. The main job was to connect my internet.

I started immediately to find the internet inbox to which I could connect my modem. Unfortunately, it was located inside a cupboard whose only access was under the built-in desk. I had to crawl on my hands and knees to approach it and the power points were hidden behind the doors. I phoned a technician to arrange for it to be fixed.

“When will this all stop falling apart on me?” I asked myself as I put in a request to the plumber again.

I thought I’d solved the problems of the apartment when the plumber came back to fix things. Nope!

An issue with the internet raised its ugly head and the Wi-Fi started dropping out. I called the technician back again. When he arrived, he suggested the modem was the problem. I rang my internet service provider and the tech spoke to them. Between them, they thought they’d solved the problem and arranged for a new modem to be sent to me.

Three days later, when the new modem arrived, it solved nothing. Finally, I asked my internet provider to send an engineer. This was bringing out the big guns.

He walked in and took one look at my system.

“I can see the problem right here!” he announced proudly. “You’ve got too much plugged in. You’ve got everything bouncing off the walls. The electronics can’t take it. Unplug all your accessories — your lamp, your microphone, your monitor. What’s the least you need?”

“Charger and mouse,” I said without hesitation.

In 10 minutes he’d fixed it. I rang the technician and told him. He couldn’t believe it.

“They’re not interfering with the electronics, they’re just a piece of dumb machinery,” he said.  I understood, but wasn’t listening. The engineer had found the solution and everything has worked just fine since. I don’t know how everything was fixed, only that it was.

If I ever suggest I should move again, I hope someone reminds me that the best laid plans of mice and men so often go astray.

Have you had any unexpected issues arise during or after moving house?