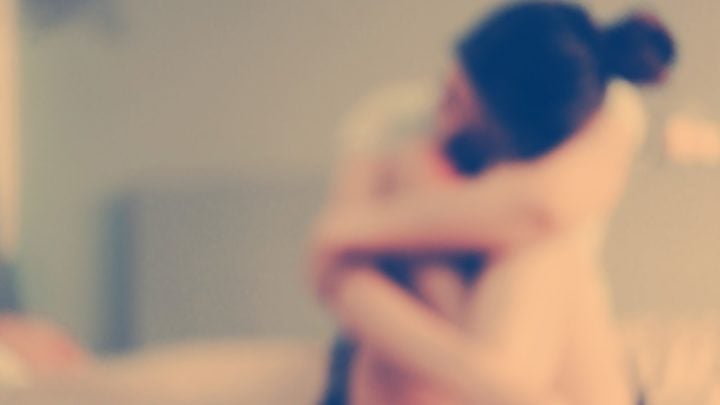 This community writer had to live with the shame of her rape for more than 20 years. Source: Getty Images

A typical winter’s day in Adelaide, South Australia, I set off to college on the bus as normal but at some point through the day there was a bus strike, so when I finished I had to walk home. We only lived at Mile End and college was right in the city so on a nice sunny day it would have been doable, but in the rain when my umbrella had turned inside out and walking in high-heeled boots and a wool skirt it was torture.

As I got to the lights at West Terrace a friend of my father’s stopped and offered me a lift home. He had just picked up his brand new gold Mercedes-Benz. I had known this man all my life so jumped at the chance to get home more quickly.

We spoke about the general bother of a bus strike and he asked me about school, telling me he needed a new secretary and would give me a job when I graduated college. My father’s friend took a wrong turn and we ended up in the lane near my house I said I could walk from here I went to thank him. He then pushed me into the back of his car face down and raped me. I was 14 years old and a virgin. He told me I couldn’t be a virgin and ordered me to shut up or he would smother me. I was silent. When he had finished he passed me my bag and kissed the top of my head and said ‘thank you’.

I was cold, wet, numb and finished my walk home in the rain shivering and in fear.

When I got home my father asked me what was wrong and why I was crying. I told him my story. Dad went pale, he had tears in his eyes too, and when I had finished my story his sadness, turned into pure rage. He grabbed me and took me to the bathroom and ran a bath. He stripped me of all my clothes. I was so ashamed, my father had never seen me naked. He scooped up my clothes, these clothes were never seen again, and told me to wait in the bath until he got home. He told me to scrub myself and scrub I did, with a nail brush until my skin was red raw, I kept adding hot water to the bath to keep out the chills. I was scared and so cold, the hot water felt like fire on my skin.

When Dad arrived home he was in a great mood brought me a towel gave me a hot cup of sweet tea and a tablet to take (I now know the tablet was Valium). He then told me to go to bed and never to speak of things again. He told me it was a mistake and not to worry, it would soon just be a distant memory. He reinforced that I was not to tell my mother, not to worry her, never tell her as it will only upset her.

I was so confused. I was so shocked I did as I was told.

Those who think the first time they have sex they won’t get pregnant have it wrong. I did. I was late and I knew in my gut what was wrong. I was afraid to tell anyone, but I told my friend Stacey*. She was shocked — because I’d not told her I had a boyfriend let alone was having sex. She thought this poor guy called Shane*, who’d been hanging around, was the father and she told him off about me being pregnant. I just let her get on with the yelling and said nothing.

Stacey took me to her mother, a lay I used to call Aunty May*. (In those days it was polite not to call adults by their first name if you were a child.) Aunty May took me to a family planning clinic and they confirmed four days later that I was indeed pregnant.

Aunty May called my mum over for coffee and told my mother. She was so upset she called me every name under the sun that referred to a ‘loose woman’.

Aunty May had arranged for me to have an abortion, but they needed my mother to sign the papers so I could have it all done for free. Mum signed and told me to never tell anyone. She asked May to keep me at her house for two weeks so she didn’t have to look at me. My father was also away for two weeks, on an overseas business trip.

After the worst ordeal of my life and a two-week banishment, I went home. Everyone acted like all was fine in the world. I was dying on the inside. I would have fits of rage and stages when all I could do was cry. Dad acted like nothing had happened and brought me home a doll from his trip overseas … A doll! After all I’d been through!

My dad knew half a story and my mum knew the another half and I was left in-between. Three years later my parents divorced, so my whole story was one left untold for many years.

When I was in my 30s, my father asked me to forgive him for being such a pig. He told me his friend was known to ‘like young girls’ and was always having ‘close calls’. He then told me he took $60,000, which was all the money in his safe, and gave him my clothes. The money came from the rapist’s payroll for his company. I felt sick and betrayed; my father had basically sold me.

My father, who had cancer, wanted me to forgive him. I told him I couldn’t and informed him of the rest of my story, including the abortion and the shame of it all. My father was crying and so was I. I told him I was going to tell Mum the whole truth too, so she would understand. Even then my father wanted me to say nothing to my mother and to especially say nothing to his new wife.

I left my dad’s that day and never went back until his death 12 months later.

My father has been dead for 20 years, my mother gone for 10 years and the rapist died seven years ago. I finally feel I can relieve myself of this story.

*Names have been changed to protect identities.