The one little phrase that ignites intergenerational warfare on social media 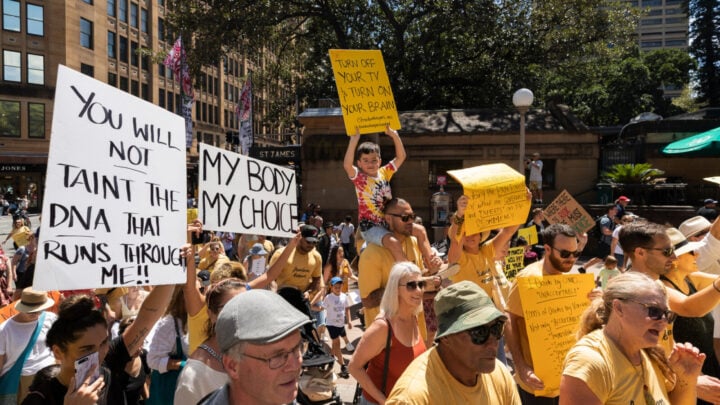 There is always one phrase that riles people up. Source: Getty

These days there’s one phrase sure to bring out the worst in some people: “I’m fully vaccinated”.

It’s a pretty simple remark really, and it’s factually true. I’m triple vaccinated, two initial vaccines and a booster. And a chilled glass of Black Hops ale, just to be doubly safe. But for a small but astonishingly furious and vocal sector of the community, which seems to regard vaccination as the work of Satan’s mother in law, this is enough to set them off on a rant.

Their fury usually includes the promise that because I’m over 60 and now have this ‘poison’ in me, I’ll be dead soon which will give them cause to celebrate another Covid-19 related death.

“Ah yeah he died coz of the vaccine, not coz he got Covid-19 and had heaps of underlying conditions.”

It’s like saying someone run over by a bus died due to the bus existing, not because they were hit by it. Or, as I have heard a few anti-vaxxers say of elderly Covid-19 victims, well he was going to die anyway. Perhaps, but I guarantee it wasn’t in the diary for that specific day.

Pro-choice, anti-mandate, anti-vaxx … these extremists lurk behind banners created probably in a grubby basement in America and promoted on social media sites by people who prefer to believe some whacko on Facebook rather than the epidemiologists whose expert take on the pandemic is dismissed as the ravings of Dr Evil.

As a member of the so-called ‘older generation’, our journey through this two-year haunted house called Covid-19 has been quite enlightening.

Above all, the stress of Covid-19 – closed borders, life-threatening shortages of toilet rolls and the constant fear of the plague – has illustrated how Australians have become less tolerant of differing opinions. None more so now than with the chasm between the generations.

The Over 60s –  those of us from the old days when vaccines were for polio and we called radio our high tech entertainment – are now often regarded by today’s entitled snowflakes as irrelevant in their modern world.

The over 60s have little tolerance for the silly fads of today’s kids but to be fair, we had no sympathy for our parents’ generation either. Survived a Depression? Fought in World War Two? Well, we had to cope with the break up of the Beatles and cope with black and white TV and telephones screwed to a wall!

Our parents delighted in telling us the Beatles did not play real music while listening to their Mantovani albums which define the 1950s and 60s for some of us.

So when I hear Kanye or some other modern rapper committing grievous bodily harm to musical notes, I am reminded that his fans regard my era’s music as the likely equivalent of Mantovani and his Orchestra.

Music is a simple example of the sort of intolerance that seems to define Australia these days. Far worse is the vaxx/anti-vaxx divide which has brought out the worst in people. Most prominently, these people have sadly demonstrated that we are not really a united country of sun-drenched, beer-sharing mates, despite what the PR people may pitch in their diversity-rich Woke advertising campaigns.

Every day our social media is filled with self-educated experts who portray themselves as the only true Aussies – but are they?

It takes more than Vegemite and knowing the lyrics to Up There Cazaly to claim true Aussie heritage (you can stop singing that song now).

The vaccination debate has illustrated how easily faceless social media influencers have twisted a complex debate into hate speech, protest rallies and whatever else their international protest leaders have told them to say.

I reckon it’s time the retirees struck back and set up a social media site that plays endless Mantovani and his Orchestra music back at them.

If we’re going to have psychological inter-generational warfare it should be set to music.

What phrase brings out the worst in you?