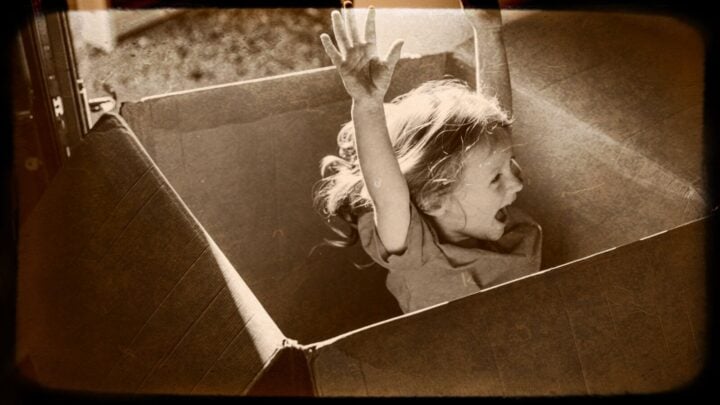 Moving repeatedly is said to have a negative impact on children, but Gay has plenty of good times to recall. Source: Stock Photo/Getty Images

According to my mum, my memory of living in Punt Road, Melbourne at age four was correct. I was a tiny girl. We lived a short distance from the local shop and I would walk to the shop with my little purse in hand, which contained a penny for a chocolate frog. It was such a treat.

Our house (still there today) was opposite a park. A park with a roundabout. To those who haven’t seen one, a huge wooden circle that went round at high speed. As you can imagine , it was going to have me on it come hell or high water.

You’ll have to do your best to picture this determined four-year-old taking off across Punt Road with her eyes set on that roundabout. I’m sure I gave a few drivers a heart attack. Once across the road, I was on my playground dream. A few big boys were on the roundabout and they picked me up and perched me on the circle. I held on for grim death as they pushed it pushed faster and faster.

My mum ran out of the house just in time to see me flipped off and into the dirt. I was laughing my head off.

Much to my surprise I woke one day to see mum packing all our stuff into boxes. She’d often told me that if I didn’t eat my food it would go to hungry kids, so I thought a few kids were getting some battered toys instead of my left over lunch.

However, this was the start of a new adventure. We moved to Seaford to run the local bakery for five or six years, which was quite uneventful in my mind. I do recall one birthday where I received a felt-faced doll that I considered a bit ugly. I nicked Mum’s lipstick and eyebrow pencil hoping to improve her looks. I didn’t.

My poor mum worked like a slave in the bakery selling hot water from a copper for campers’ and visitors’ tea. I can remember her getting blisters on her arms when it was getting to the bottom.

We next moved to Malmsbury, a town in central Victoria. I loved the school I attended. On freezing days we all went outside to get a mug of hot chocolate. A pot belly stove kept the school room warm.

The cart horse carried us every day, and on wet days four kids would ride on its back covered by a tarp. I was most upset, it was Dad’s horse, but all the rain dripped onto me and I spent the day with a wet bum.

Easter was special. Dad made heaps of hot cross buns and I was taken out of bed in the wee hours, given a brush and the sugar glaze, and helped make them shiny.

Of course we moved yet again. My dad built up the bakery, sold it and moved to the next. It was in Hepburn Springs, which is now a resort town in Victoria. It was to become my favourite spot. Books weren’t big in my house and I craved them so much it hurt, so imagine my joy when I learned the school had a library.

I was allowed to take home one book at a time, but I snuck another one inside of the legal book. Walking home my teacher fell in step with me asking what I was reading and spotted the second book. I held my breath, not that I would be scolded but that she would take the book away. That lovely lady never said a word. I still remember the book too, Enid Blyton’s The Magic Faraway Tree.

The classrooms were all together, separated by curtains. On my first day I was called up to introduce myself and my bottom caught the curtain and I dragged it all the way to the front of the room. So embarrassing! I wasn’t a particularly social child, but being under the watchful eye of 20 curious kids was something not to be forgotten.

It was a difficult and sad time too, especially when I consider all this coronavirus stuff. Polio was a scourge when I was growing up. As children we had no concept of what was going on. Two children in my class got polio, one returned to class with callipers on while the other never came home. We didn’t ask too many questions back then either.

I had another few moves, but the last was probably the most influential on me. We moved to Casterton in 1950. I made friends with the Aboriginal children. I also got a smack around the ear if I was ever disrespectful to the adults, same as their own children.

We gave the old man sitting outside his gunya with his spear at the ready a wide berth. One day he had disappeared. My friends told me that “he was a bad bloke; they pointed him” and that was how I learned about ‘pointing the bone’ to mentally attack a person.

The school we attended did not segregate. One Christmas, the indigenous children joined us at church. The minister saw all these faces and thought he’d brought them all to Jesus. He shook every hand as we filed out of the church and when he got to the eldest boy he said, “Can you accept Jesus as your saviour?” I’ll never forget the boy’s response. With a big toothy grin he said, “Nah mate. Jesus sounds like a good blog, but we got the Rainbow Snake.” Enough said.

I’ve heard it said that moving repeatedly in childhood can have a negative affect on a person’s wellbeing, but my memories of this time are so great, I’d have never wanted to change them.