‘The fat lady has sung: Trump’s moment of truth’ 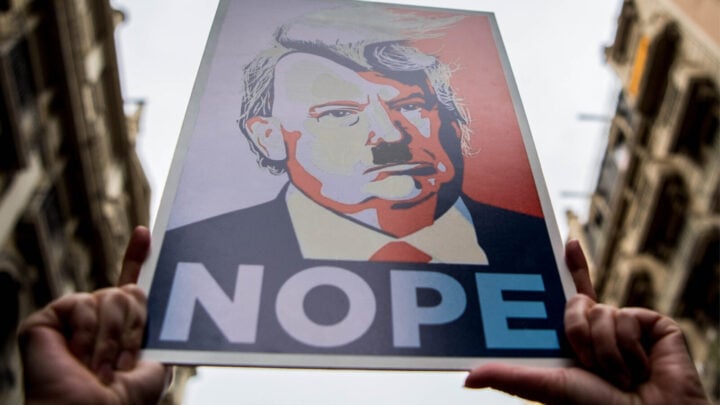 Admitting defeat was not in Hitler's vocabulary and it certainly doesn't appear to be in Donald Trump's. Source: Getty

Well, ‘it’s all over now Baby Blue’! You may huff and puff, blame and whinge ’til the cows come home! But with the Supreme Court throwing out the shameless, arm-twisting application by Texas and 17 other Republican States to save your skin, you have exhausted all avenues to legally overturn the legitimate results of the election. Your presidency, Donald Trump, is well and truly over. Now comes the really dangerous time: when the politically wounded bull will thrash around in desperation to revenge its slayers.

Trump stands for: ‘Panem Et Circenses!’ Meaning: (Give) ‘Bread and circus to the (stupid) masses’. This was the Roman motto for Caesar to stay in power by causing maximum division among his civil-war-inclined subjects. Except that the US’ Caesar pretender – lame-duck President Trump – provided only circus without bread to the American masses lately, to maximise their hunger for revenge. But it must be revenge against the other half of the masses, never against Trump himself. The circus is the relentlessly repeated and escalated false propaganda.

His cult followers have swallowed all of it, hook, line and sinker, and are becoming so furiously aggrieved that they are close to starting a civil war and killing en masse to save him from the ‘monstrous’ enemy. Maximising chaos through such a ‘divide and rule’ tactic and offering himself as the people’s unfairly victimised saviour is Trump’s last desperate and futile attempt to show himself as all powerful, despite his rejection not just by the majority of voters but also by the legal fraternity and – the ultimate of them all – the conservatively stacked Supreme Court.

When Hitler was comprehensibly checkmated in the last days of World War II in Europe, he locked himself in a bunker, surrounded by his remaining handful of loyal generals. They begged him to surrender for the sake of saving what was left of war-devastated Germany, as the victorious enemy was closing in on Berlin. But Hitler stayed in furious denial: admitting defeat was not part of his vocabulary. He ordered his exhausted, last surviving troops to fight to the death rather than surrender. If Germany failed him in fulfilling his dream of making Germany great again, then let Germany be blown to smithereens as its punishment for letting him down. And then he suicided.

But Trump seems content to tear apart just the US, without himself suiciding. He is determined to jump the sinking ship when he is sure that it has no longer any chance for staying afloat. Then he hopes to re-invent himself to ‘Make America Great Again’ – to preside over enabling the US to rise from the ashes, like a Phoenix.

But what is staggering is that while Trump’s insane anti-democratic rhetoric was initially embraced openly and fully only by the lunatic white-supremacist ultra-right fringe, now the vast majority of Republican Party supporters are convinced that the election win was actually stolen from Trump. Emboldened by such triumph of propaganda over facts and intimidated into compliance with their ‘Dear Leader’, the majority of US Senators and Republican state leaders backed the Texan application to the Supreme Court to overturn the election result and declare Trump the winner. This will go down in history as probably the largest and most blatant Republican coup attempt against democracy in the history of US elections.

Trump has now effectively exhausted all the legal means to retain power. But henceforth he’ll continue to fight extralegally, in the potentially most destructive phase of his struggle. He will not stop but, on the contrary, is inclined to incite the Proud Boys and their like to stage an insurrection to fight to the death, driven by rage to revenge the removal of their crazy cult leader from power.

Trump ignores the daily Covid-19 deaths of more than 3,000 of his fellow citizens. But with a sadistic and apocalyptic thirst for vengeance, he is intent to savour all of this, like Mark Antony, in Shakespeare’s Julius Caesar and:
“Cry ‘Havoc’ and let slip the dogs of war,
That this foul deed shall smell above the earth
With carrion men, groaning for burial.”

What do you think of Donald Trump's claims and actions since the US election in early November?