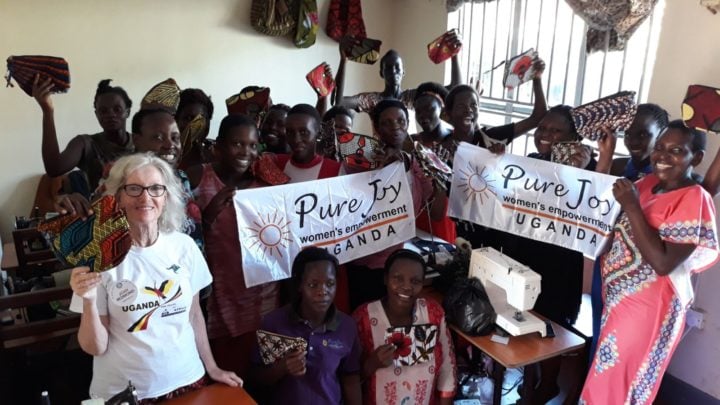 Joan Redmond honed her sewing skills and travelled to Uganda to help women less fortunate than herself earn a living as part of the Pure Joy program. Source: Joan Redmond/TAFE NSW

At 14, if I’d been told I’d still be studying five decades later, I’d have screamed, “No way. You’ll never catch me inside a classroom again, ever”. Boy was I wrong.

As the youngest of seven kids from a poor family in Dublin, Ireland, I left school early to train as a shorthand typist and became a secretary. I enjoyed the freedom of leaving school and earning money, but with low wages and clothes being expensive, I continued to use the sewing skills I learned in school to make my own clothes.

I moved to London and spent a few years working in retail marketing at Harrods and then learned to sail, which saw me travel from Greece across the Atlantic to the Caribbean on a little yacht. After that adventure it was time for me to settle down.

The 1980s saw me in Australia with two girls and then twin boys. By the time I was ready to return to work, the office was computerised. I needed job-ready skills and TAFE New South Wales was offering computer literacy and desktop publishing courses, so I enrolled.

Back at the keyboard and with a new-found confidence I went on learning and earning for 20 years.

In 2013, I retired, walked the Camino pilgrim path in Spain, joined a writer’s group, raised funds for the ShelterBox Australia charity, learned to make reusable sanitary pads and gathered mother and baby kits for women in need overseas. All of this led me to join the Rotary Club of Woy Woy and help establish the Pure Joy project.

Pure Joy is a women’s empowerment project in Uganda funded by the Rotary Club Woy Woy that has seen me travel to Jinja to teach local women vocational skills like sewing to help them gain employment and build a better life.

Many of the women grew up in poor rural communities where they received little or no education or the opportunity to break the cycle of poverty. Pure Joy gives them the chance to learn a new skill that they can then use to make their own products like bags, purses and clothes to sell at their local tourist market.

Before my last trip to Jinja in March, I realised I’d lost confidence in my sewing skills and that I’d forgotten many of the basics. I really didn’t want to fly all the way to Uganda and not be able to teach these women what they needed to know, so I thought it was time to upgrade my skills.

Jumping on the computer, I discovered there was a Statement of Attainment in Fashion Essentials starting at TAFE NSW Hornsby the following Monday. It was like the stars aligned and I enrolled.

I was nervous to be back in a learning environment, but my teacher Joanne Skyes was excellent, and oh so patient. She taught me really well and I left the course a confident sewer and took the design skills Joanne taught me to Uganda.

Travelling to Jinja, I ran a 10-day course where I taught the local women how to sew, cut patterns and how to make zipped purses, which was one of my favourite lessons at TAFE.

During my latest trip five women graduated with a Certificate of Attainment from the sewing course, which was a great achievement.

If I had one note to my younger self, it would be never say never! I’ve had a lifetime of learning, both by necessity and choice. I’m grateful for all I’ve learned along the way and thrilled that I can now use my skills to help others.

What have you done to help others less fortunate than yourself? Are there charities that you support?