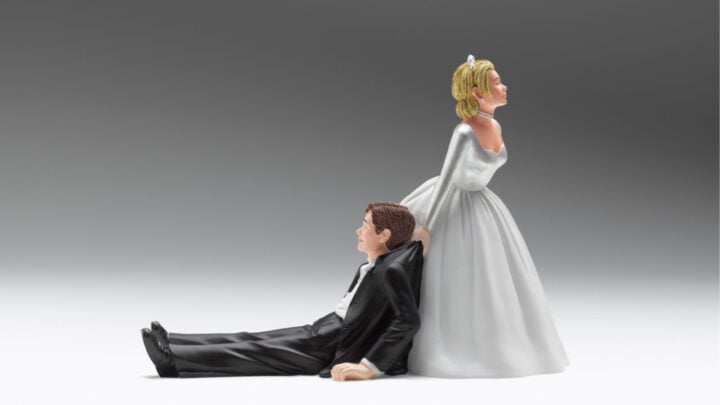 Mary recalls her difficult relationship with her stepfather. Source: Getty

My stepfather Eddie was a professional athlete. Baseball was his game, and beer was his constant companion.

Eddie pulled himself up from nothing. Both of his parents were alcoholics, but he fought and played hard to rise above his circumstances. He was a tough scrapper and a mean drunk with a temper, and if you crossed him, look out. I heard stories about Eddie’s drinking over the years, as he was also my uncle at the time. Apparently, he’d make his kids wait until he got home from the bars before they could sit down to dinner. But in his fans’ eyes, he could do no wrong.

He once spit in an umpire’s face. It was stupid, but not enough to cause any real damage. His hand was slapped and he was suspended for a year. As a World Series darling, his drinking didn’t get in the way back then. He even ran several successful businesses after his playing days were over.

In the mid-’70s, Eddie’s first wife died. Rumour has it that Eddie started flirting with my Mum at the funeral. After all she was his wife’s sister, a known entity. My Mum took the bait. She’d been single for several years, and the attentions of her handsome brother-in-law weighed in his favour. They married in 1976. I was 23 at the time and not really excited about this union. What child wants their parent to remarry? I had enjoyed the attention of my mother for several years, helping her through several unsuccessful surgeries after a catastrophic car accident when she was 52. Before his arrival, I felt I was finally needed and loved by her since her affections had been divided trying to raise six kids alone.

Eddie was the antithesis of my mother – very opinionated, right-winged, and had he been living now, would have been Trump’s biggest supporter. He subscribed to something called The Spotlight, a very conservative publication devoted to people like himself. I suspect they wore white sheets when no one was looking.

My first run-in with Eddie was at Thanksgiving in 1978. My mother hosted the event at her house, and I decided to bring my girlfriend. Little did I know I was walking into a snake pit. Eddie was on his sixth beer. Clearly, he was revving up for a fight, and I was the closest target. “I don’t like your kind,” he hissed, eyeing my girlfriend. “Get out of here,” he demanded, ushering us toward the front door.

I looked at my mother for support, but she just stood there petrified, not wanting to cause a scene. Eddie was a bully, and she didn’t want to be the recipient of his wrath. My partner and I went home. I was crushed that my mother didn’t defend me, but I soon understood why, when she asked me to write a letter of apology to Eddie for my behaviour. “But I didn’t do anything!” I protested. She explained that Eddie was easily offended by a multitude of subjects and that writing a letter of apology would smooth things between them.

Reluctantly, I wrote the letter, not knowing that this would be the first of many incidents over the years, where Eddie’s drinking turned him into an animal, a rabid attack dog intent on winning the fight. Many times, Eddie was a charmer, but when he’d drink, his personality would flip. His racism and intolerance would take over, and he’d lash out. Blacks, Hispanics, gays and liberals were his usual targets. On holidays, he’d usually turn on my brothers, whom he deemed as “losers”. Oddly enough, one of them was also an alcoholic. Go figure. But Eddie didn’t admit to having a drinking problem. He also pretended he wasn’t Polish by changing his name. He’d been teased so often, his shame making him even more defensive.

In 2000, after my mother died of lung cancer, I thought he and I would foster a special bond after dealing with her illness for six months. Perhaps we’d share fond memories of her and enjoy occasional visits with one another. But soon after the funeral, he turned on me, insinuating that I was a lousy daughter. I think he hated the fact that I was alive, and she was dead. As I attempted to handle her affairs, he then turned the rest of his family against me. “You’re either on my team or you’re not,” he’d snarl. You cannot reason with an alcoholic in denial, especially a mean one.

Although my mother had many happy years with Eddie, I can’t forget how he treated her and my siblings at times. If he had sought help along the way, my memories might could been more pleasant.

Did you grow up with a step-parent?