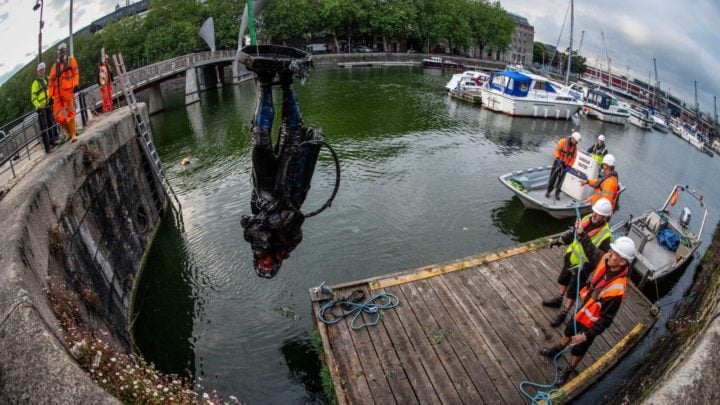 The statue of slave trader Edward Colston (being recovered here) was unceremoniously pushed into Bristol Harbour during the Black Lives Matter protests in the UK. Source: Getty Images

It was probably Black Lives Matter that started it all. Beginning in the United States, deep-seated grievances right across the world, especially the Western world, seemed to flush out huge demonstrations of public anger, evidenced by the pulling down of 19th century statues of public figures who don’t seem quite so distinguished to modern eyes.

Most spectacular of them all was the disappearance into the drink of Edward Colston, former slaver and subsequent benefactor of the British city of Bristol. But the one that caught my eye was a rowdy demonstration over a statue of British imperialist Cecil Rhodes, perched in a stone niche high on the front face of Oriel College, Oxford.

Over the years, a passing knowledge of the United Kingdom has enabled me to recognise a few names of Oxford or Cambridge colleges, but the only ones to have ever made a lasting impression were St Edmund Hall, for its role as a bastion of British rugby prowess, and Gonville and Caius, the setting for the 1981 blockbuster Chariots of Fire. Certainly not Oriel.

Yet, it was the concurrent storm around former High Court justice Dyson Heydon that began to stir my curiosity about Oxford colleges. I had read that like so many notable Australians of an earlier generation, Heydon had been a recipient of a prestigious Rhodes scholarship, in 1964. Further reading revealed that he had studied at University College, Oxford, a college I was even less familiar with than Oriel.

University College, it turns out, is possibly the oldest educational institution in the United Kingdom, having been endowed in 1249 when the Plantagenet King Henry III was on the English throne. More significantly for my tale, was further news that dribbled out subsequently that not only was Heydon a Rhodes Scholar but that he was a member of the panel that awarded Tony Abbott his Rhodes scholarship some 20 years later.

And a few years before Abbott received his Rhodes blessing, so did Malcolm Turnbull, his successor as prime minister. It got me thinking because in the years I was at Sydney University, I could not remember the question of Rhodes scholarship applications ever coming up. Were they publicly announced or canvassed, I wondered, or were they intimated to ‘club’ members by quiet expressions of interest?

Rhodes scholarships have been awarded in Australia since 1903, on the basis of one per state plus a few others, yet when I looked up those who received awards for New South Wales, you could be pretty confident in saying that, until the last 30 years or so, the likelihood of anyone winning who did not go to a Great Public School was remote.

Indeed, my own former school, North Sydney Boys, while generally regarded as among the best, if not the best, academically (and for sporting achievement also) in NSW for decades, did not received an award until 1996. And as for women, students from systemic Catholic schools or indigenous Australians, forget it.

Now, my point is not that this is all very unfair — which it is, but which as an act of bias the Rhodes Trust appears to have rectified — but rather it reflects a seismic shift in people’s personal and social expectations over the past generation or so.

Thus, when I write that no one from North Sydney was awarded a Rhodes scholarship before 1996, it would be wrong to assume that such students were discriminated against. The truth is, my school colleagues would not have imagined such baubles from the dizzier heights of the British imperial family we were born into, were theirs to sup on. We were merely the skilled tradesman and professionals upon whom our leaders, the notables from the higher echelons of society, relied upon to keep the show on the road.

When I first went to university in the early-1960s, my rugby-playing activities brought me into direct contact with such god-like figures that five years of public high school education would not have prepared me for. Because I found that no matter how different from each other were the boys from Shore or Kings or Newington or Riverview, what they shared was something that no superior education in a selective high school could provide — confidence.

If I needed any proof of this, I found it some years later when I worked with a young scion of Scots College. Beneath the building in which our offices were was a small parking area capable of housing two vehicles, one for the boss and one for important visitors. But my young colleague proceeded to claim that second space for himself, on the basis, as he explained to me, of ‘assuming all rights’. And no one ever challenged him!

Whether the discreet advertisement in Country Life or Field & Stream magazines was brought to their attention or whether they were quietly tapped on the shoulder didn’t matter, such club members as my friend from Scots, had the innate confidence to assume that to apply for a Rhodes scholarship was perfectly natural for someone of their background. For someone from either North Sydney Boys or North Sydney Girls or St Patrick’s Strathfield to have done so before about 1990, would have been rather poor form, don’t you think?

That is why I have always had my doubts about the ability of selective high schools to level the playing field between public school students and those from the Great Public Schools (and their girls’ equivalents). Because that private school education provided an insight and a cultural experience essential for success in a complex world, yet so intangible that I doubt whether any curriculum could have been devised to provide it.

Although in my particular school year alone, there were two students who went on to become justices of the NSW Supreme Court, there was no one with the nerve (or chutzpah, as New Yorkers like to say) to stand up on any stage and issue the challenge: here I stand, and you can like it or lump it.

However, times have changed and the Empire has gone and with it, the establishment glue that kept it all together; while the legitimacy of liberal Western culture is under an attack more fierce than anything the Nazis could have thrown at it. And so, Rhodes scholarships are now open to anyone.

But meanwhile, the sons of the establishment could not be less interested as they check their private investments on their smartphones while waving for another daiquiri from that attentive waiter at the ‘Big Yawn’ bar, just along the beach from St Tropez. Chin, chin!

What do you think about what this author has to say?