‘Polishing my (br)ass off: My surprising new career at 60’ 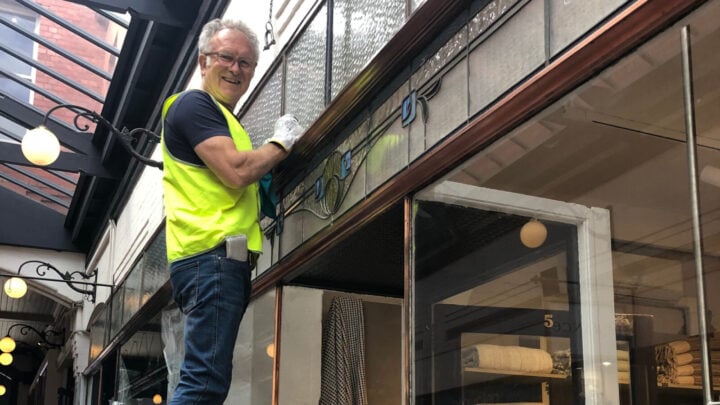 Brian has found a new lease on life in his 60s. Source: Brian James

After careers in media, business start-ups and PR, I was heading into retirement in mid-2019. However, my plans went awry when my daughter invited me to clean and polish the heavily oxidised copper window frames on her new shop, Loom Towels, in Kings Arcade, Armadale (Melbourne).

It was a tough labour-of-love removing 60 years of stubborn black oxidisation from the window frames, but I learnt on the job. Such was my success that Kings’ Arcade landlord engaged me to clean and polish the other 11 shops in the heritage precinct built in 1893. My new career had begun, at 68.

Since then I have restored brass, copper and stainless steel window frames on over 100 shops throughout Melbourne’s older shopping strips. My new profession, or trade as the Copper Doctor, has kept me in shape too. I’ve lost 8 kilos. It’s such a hands-on gig.

The new trade is certainly a departure from my previous life. Melbourne-born, I moved to Sydney after secondary schooling to complete a University degree. When an ABC children’s radio producer overheard me speaking in a lift, I was offered a role as presenter/interviewer on a number of arts programs for young listeners. It was the start of a career in radio and television for the ABC, in Brisbane, Sydney and Melbourne. I also worked on a pioneering video program for remote schools in Queensland for three years.

During my media career, I was chosen by the Australian Government, with sixteen other young Australians, to represent the country at the World’s Fair (Expo 74) in Spokane, Washington State, USA. At the end of Expo 74, I was hired by an international entertainment company to head their advance promotions throughout America and Mexico. It was an amazing opportunity for a young Australian to get to know the US and Mexico for two years, which also included working with the White House and Coretta King (Martin Luther King’s wife).

Toward the end of my radio career, I was inspired by entrepreneurs I featured in a documentary. It led to a number of start-up businesses, with my former wife, Rhonda, in hospitality, importing and manufacturing. Later, after selling the businesses, I created a PR business promoting entrepreneurs.

In semi-retirement last year, I was looking forward to completing four books for teenage readers, which have now been side-tracked with my new Copper Doctor role. The shopfront restoration business is rewarding, but it’s physically challenging. I plan to build the business and then sell it and concentrate on my books.

However, I will miss a number of the benefits of my new career. One of the benefits is the passing parade of people who stop and chat to comment on my restoration, but also to offer remedies for de-oxidising the window frames. People swear by tomato sauce, Coke and also vinegar and bicarb soda to remove tarnished metal, but elbow grease, secret polishing cream and ultra fine sanding pads and steel wool work for me.

In fact I have developed a six-stage process for restoring the brilliant shine to shops, culminating with two coats of a special (US) lacquer to prevent oxidisation.

I not only restores shopfronts, but have also restored Maltese Knights in shining armour, brass planters, 1890 railway artefacts, brass kitchens and meditation bowls.

I love what I do and you’re never too old to learn a new trade; old dogs, new tricks, as long as the body is willing and you love what you do.

Since posting my polishing projects on Instagram, I’ve has received enquiries from Sydney and Brisbane retailers and landlords expressing interest in my polishing business. As soon as the borders open, I’ll be heading up there.

Did you find a new career later in life?