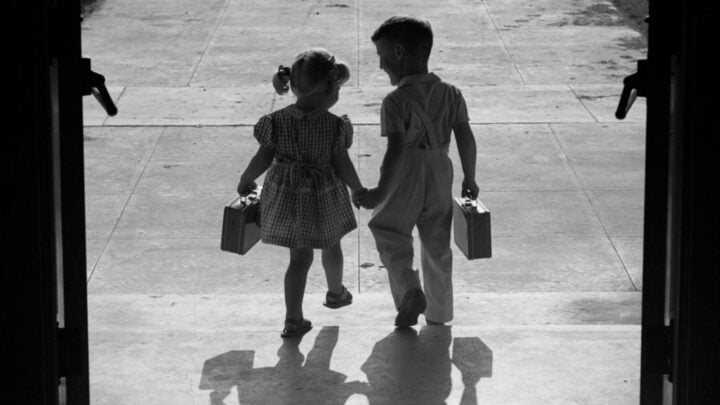 Do you remember how you met your love? Source: Getty Images

Such a common few words: ‘Where did you meet?’ If asked today, I think the most common answer would be ‘online’. Let’s go back a bit though, as I’m 80 perhaps we need to go back more than a bit.

I once asked my ‘grampa’ how he’d met my dad’s mother. He told me that the family were from Perth, in a strong Scottish community. His mother had chosen a suitable girl and they were to meet at a ceilidh (a social event with Scottish folk music and singing, traditional dancing and some storytelling).

Grampa, 1.8-plus metres tall, very handsome and from a good family. He was quite the catch and very desired by mothers in the community. He said he could have his pick of the eligible girls. He looked and said, “I want that one”, he asked Margaret to dance and they married soon after.

My own father was a ballroom dancer from Victoria. In the 1930s, the Palais de Danse at St Kilda in Melbourne was the place to be.

Dad, being a fab dancer was always in demand. He had a rather large ego and only danced with the pretty girls who were also the best dancers.

Mum was an excellent dancer and beautiful. She would wear a dress made by her sister to every dance. Other girls wanted to be like her and would copy her attire, so every week she’d need a new dress to wear out.

One particular night, the large dance hall was more crowded than usual, so Dad lay on a bench and chose the best dancing feet he could find. Turns out those feet belonged to my mum. Dad told me she was also “a good sort”.

My father was married at the time. He’d tied the knot at 17. He was also seven years older than my mum. Mum’s family was horrified, but it must have been a match made in heaven because Dad started divorce proceedings and Mum helped pay for it so that they could be together. It took three years!

They were a good couple until he passed away.

My mother-in-law was only 16 years old when she met my father-in-law. He was a lifeguard at the local baths and, coincidentally, was also seven years older than she was.

My father-in-law says he’d been watching the pool when a girl came his way. Only her eyes were visible, huge eyes that my daughter also seems to feature. My father-in-law fell in love with this girl’s eyes, and the rest is history.

I guess that just leaves me in this family saga. My aunty asked her then 18-year-old nephew to come to a dance and said she would bring a young girl she worked with to keep him company. He had no lack of female companions, so was a bit put out and said to his aunt, “I’ll have a look at her first”.

I was waiting across the road. I was only 16. I couldn’t stop staring at this gorgeous bloke. He saw me an apparently said, “Okay, I’ll come”.

That night he saw me home, and as we stood on the verandah he placed his hands on either side of my face and said, “You know I am going to marry you, don’t you?”
My very definite answer was yes, and we did marry … Four years later.

With so many dating apps and people meeting each other online, I can only hope the internet doesn’t do away with romance.

How did you meet your spouse, partner or significant other?