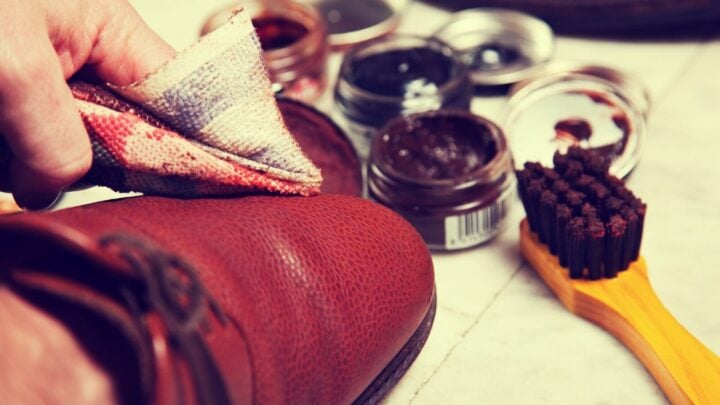 For my reverie today, I am gazing at a modern shoe polish, like a roll-on. Much easier and far less messy than our good old days. When we were little, after tea, my father would lay down some newspaper. On it, he placed our leather school shoes, his work shoes, and our white shoes.

This was a nightly ritual. I took over shoe polishing when I was old enough. First, the leather shoes had to be adorned with black or brown nugget paste. Then I had to brush the shoes, before I polished them to a sheen with a soft cloth. Those shoes had to pass inspection, or I would have to re-polish them.

For sports attire, we had white sandshoes. Again, white nugget shoe polish, slightly more runny, which needed to dry. Then a bit of brushing and polishing. We would often wear our sandshoes on the weekend, for comfort and protection. On Saturday afternoons, if we were ‘good’, we were permitted to walk to the local grocery store, which later became a milk bar. There we might spend part of our weekly pocket money on a Dixie Cup ice cream each.

A Dixie Cup! Ah, more in this reverie.

The Dixie Cup was a small circular cardboard container of vanilla ice cream. It came equipped with a small wooden paddle, with which to scoop up this frozen treat. Sometimes, my sister would be commissioned to buy an ice cream brick for sweets for the entire family. Our favourite was the strawberry ice cream brick, with frozen pieces of fruit, a delight. Ice cream was regarded as healthy, it probably had far fewer preservatives and additives, in comparison to ice cream we purchase and serve today.

Yes, a reverie. I can still recall the aroma of shoe polish, the inhalation of white sandshoes, slightly sweated. I can reminisce about the flavours of Dixie Cups, and ice cream bricks.

As we age, we can sit in the sunlight in the afternoons, and wind back the years. All perfectly normal, but we must also look forward. These days, I wear joggers for daily footwear, everyone seems to. I do have a black pair. Time to give them a brush and polish, just the same as the past. I get to clean the shoes. Easy peasy. Progress is what it used to be, I suppose, rolling on the shoe polish. Well, that was my reverie.

Did you spend time shining your shoes? What are some of your favourite memories?