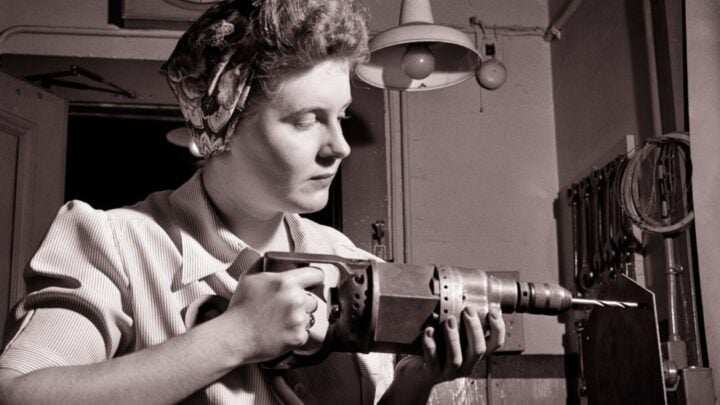 Women cemented their place in the workforce during World Wars I and II, but the battle still rages. Source: Getty Images

A statue marking the life of suffragist (later known as suffragettes) Millicent Fawcett was unveiled in London three years ago on April 24, 2018. This hugely influential feminist campaigned for the right to vote, which was granted to women over the age of 30 a century ago in 1918. Yet even as late as 1917, just months before the bill was passed, powerful men in parliament were trying to stop votes for women. They failed and women had a little win.

During World War I, women’s contribution to the workforce rose considerably but the increase tended to be in what were already traditional areas of women’s work — in the clothing and footwear, food and printing sectors. There was some increase also in the clerical, shop assistant and teaching areas.

Unions were however, unwilling to let women join the workforce in greater numbers in traditional male areas as they feared that this would lower wages. Many women sought to become more involved in war-related activities — such as cooks, stretcher bearers, motor car drivers, interpreters, munitions workers — but the government did not allow this participation.

Another small step forward for the ‘fairer sex’?

World War II was said to empower women, inspiring their fight for social change and equality.

In an article published online, author Annette McDermott writes: “At first, women weren’t always welcomed into the workplace. They received less pay and some men looked down on them and felt they weren’t up to handling a ‘man’s job’. They often faced sexual harassment and long hours.”

Who could ever forget Rosie the Riveter? A confident-looking woman flexing her muscles under the slogan ‘We Can Do It!’ became an icon from the World War II era. Initially this imagery was used to inspire patriotism among women, but it took on a new meaning, one of women’s liberation.

Though progress was slow over the next two decades, even after the so-called lessons of war, serving their country in the military and at home empowered women to fight for the right to work in non-traditional jobs for equal pay and for equal rights in the workplace and beyond.

The war ended and the ‘boys’ came home. Unfortunately, and unceremoniously, women were put back ‘in their place’, home and hearth. It was a shocking common phrase at the time and even now: “Keep ‘em bare foot and pregnant”.

Was anything gained for our hard-working women after World War II?

The feminist movement tried to boost the plight of women in the 1960s and ’70s, but common perception was they were simply ‘ugmo’ lesbians who didn’t want to shave their legs or underarm; you know that to be true. Details of the movement from the late-’50s through to the ’80s is well documented; hell, most of us lived it!

Fast forward to March, 2021, and the shocking abuse revelations of the past month. Apparently we have a parliament over-loaded with misogynists (from all political parties) complete with people beating their breasts.

We’ve been promised inquiries, commissions, investigations; more promises to explore, inspect, examine, probe, analyse, survey, inquire and enquire, look into, research and search up the ying-yang. An Attorney-General of dubious reputation and a Prime Minister who is continually apologising for his ‘tongue-slips’, most, tearfully mouthing mea culpas.

But, the most dangerous animal of all in my opinion may prove to be the female ‘colleague’. The woman other women simply presume is a card-carrying member of the sisterhood. Be wary of those with blind ambition, unspecified career trajectory combined with ambiguous sexual preferences. In other words, ‘watch your back’ in every sense of that phrase; the ‘bad guy’ may be a female, as we have discovered of late.

Sadly and shamefully our opening quote from early in the 20th century — “Working women endured harassment, miserable working conditions and low pay” — appears to be still relevant and the norm in Australia, in the 21st century. I fear that for the few battles women have won along the way, we have sure as hell lost the damn war!