‘What it was like celebrating a wartime Christmas in Britain’ 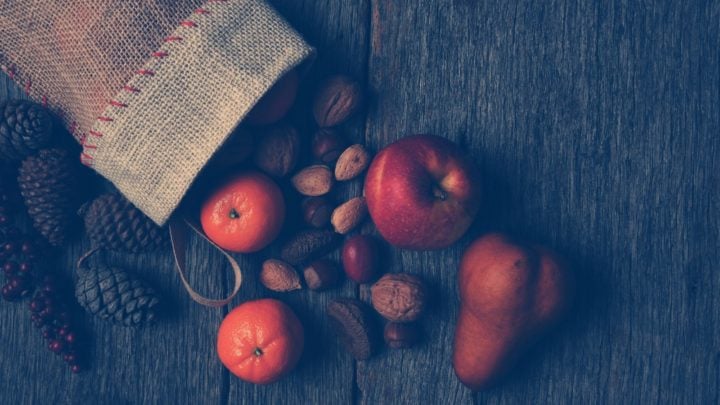 Brian remembers sorting through the goodies of his Christmas stocking. Source: Getty Images

Times weren’t particularly hard where my mother, father and I were living, on the outskirts of Bristol in the United Kingdom, but World War II certainly had its effect on our lives. For others, living in heavily bombed areas and parts of the country that were semi-sealed because of secret establishments close at hand, times must have been even more difficult than it was for us, though luckily I was really too young to be aware of all the hardships that were having their effect of people’s lives.

Obviously there were the important things that had a major effect, like rationing, importing difficulties and the fact that so much raw material was required for the war effort. For Mum during the earlier part of the war, when Dad had been called up, there was just she and I at home and she must have been existing on whatever army pay Dad was able to send home to her. Again, I was too young to appreciate or even know where the money we lived on came from, and even now I really have no idea … If only I had asked questions at the time, but at four or five years old those aren’t the problems that spring to mind! Dad came home a couple of years later, having been injured, and things returned, from my point of view, almost back to normal.

I do remember Christmas celebrations fairly well, especially towards the end of the war, when I was eight or nine years old and even I knew they were pretty austere events compared to those I remembered previously. The family tradition was that I would go into my parents’ bedroom and get into bed between them, usually at about 6am (like most kids). Once settled, Mum would pull out the Christmas stocking (one of here silk ones), from under the bed, where in my naivety I believed for several years was where Father Christmas had left it! The contents of that stocking constituted my complete Christmas haul of presents, due partly to the restrictions of war and partly, I have since realised, to the fact that my parents never had a lot of money to spare!

I always got a great deal of pleasure out of searching through the stocking, although I knew what most of the contents would be, like the orange right at the bottom (I don’t know where they managed to get that each year!), nuts, sweets, small games and, hidden deep in there somewhere my ‘main’ present, if it was small enough to fit. This would be the one thing they had saved up throughout the year to give me. I remember one year, as an example, when I was about eight, they gave me my very first wrist watch, a Kelton, I recall. That to me was just as wonderful a gift as an iPad would be to today’s youngsters, with all the lavish electronic games and gadgets that are now available.

My stocking-full of little gifts was pretty much the average for that time, in a working-class neighbourhood, with the king of gifts being, in the slightly wealthier families, a pushbike. Of course that didn’t come in a stocking, like my watch! Other prized presents were roller skates, cricket bats, footballs and football gear in the colours of a favourite national team, and the occasional air rifle or pistol, which was a real prize.

By today’s lavish standards, even the rest of Christmas Day was a pretty low key affair. In Britain it’s the middle of winter, so it’s likely the weather will be dull, cold and possibly snowing a little, not conducive to going out into the street to show off, and play with, the toys and games just received from ‘Santa’. Rationing meant there wasn’t a lot of variety in available food either; to us the great luxury of the day was to have a roast chicken for lunch, not a meal eaten on a daily basis in those days before chicken farming, etc.

Hams and turkeys, so popular and available now were almost unheard-of luxuries, as were French wines and American spirits. Even real coffee was a stranger in most homes — the standard drink that had the nerve to call itself coffee was ‘Camp”’, a thick syrup in a bottle that contained about 10 per cent coffee and 90 per cent chicory. There was no television of course, all entertainment was gained from the radio, a wonderful machine we all used to crouch around, enthralled by the sounds that came out of it.

Yet we always seemed to have nice Christmas celebrations, mainly because nothing was demanded of us like it is today. We provided our own entertainment, cooked our own food and simply enjoyed each other’s company — something I admit I sometimes wish I could go back to today!

What Christmas rituals do you wish you could go back to today? Did you have a Christmas stocking?