‘Newsroom blues: The closure of local newspapers is a blow to regional Australia’ 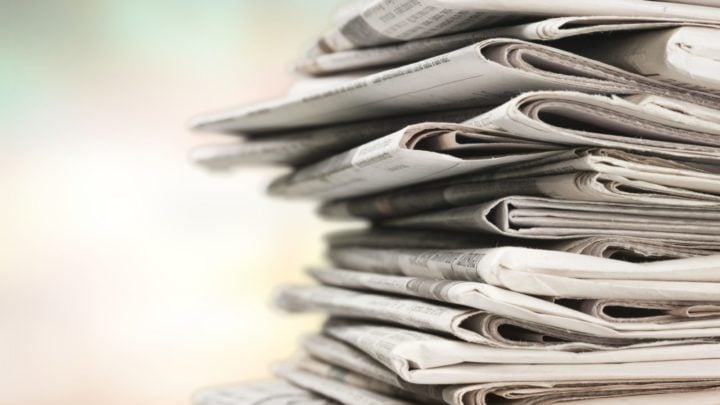 Is this the death of community news in Australia? Source: Getty Images

Most of my working life was spent on the staffs of metropolitan and national newspapers and such an environment inevitably rubs off on you. You tend to see the world in big-picture terms, as you draw the universal conclusion from the myriad of, well, small daubs of colour that make up the whole canvas.

It’s not as if you are a walking philosophy text book, but rather, it’s just the way your mind works once you absorb the expectations of a major daily. Regional and community newspapers are quite different, as I discovered when asked to fill in as editor of a local paper on the south coast of New South Wales.

There, the overriding context remains, of course, because no one, especially not an entire region, lives in a wholly isolated bubble. But the context is so much less obvious to discern that it is easy to say it does not matter because the specific detail is all that really counts. That attention to detail, ironically, is what has given ‘the local rag’ such an ambiguous reputation over many decades, so that when its future is threatened, many people, I believe, would hardly raise a shoulder to shrug in response. I beg to differ.

Just the other day, I received an email from the journos’ union advising members that about 100 regional and community mastheads from one particular newspaper stable were either going to close or were to become wholly digital, without any hard copy, ink-on-your-fingers newspapers to their name. My further inquiries revealed that since the onset of the Covid-19 pandemic and its shutdown, 229 Australian local newsrooms had drastically pruned their staffs or, in the case of 115 of them, closed their doors permanently.

Now, I know that there are many out there who think that journos are a waste of space, opinionated, biased, lazy drones or whatever you like — though largely, I suspect, because they don’t mimic the opinions of their own opinionated selves. Yet, I wonder what the complainers would think should the inevitable actually happen and their own community newspaper were to bite the dust. I wonder how comfortable and trusting they would really feel knowing that the only sources of information will be from hate-peddlers on social media and local bullies and shonks with their own barrows to push?

In speaking in defence of the local rag, I can only say what it was like when I edited this one particular paper. Despite my inexperience of the community press, I did have one advantage that I didn’t appreciate at the time: the catchment of my paper was a very poor area of about 120,000 people and the paper was distributed free without a cover charge.

So, at once, the pressure that some advertisers bring to bear by threatening to withhold priceless display ads if the news coverage was not to their liking, was diluted. There were too many advertisers promoting very small businesses and the local people were not generally in the market for big-ticket spending. What I did discover, very early on, was how critical a community paper was to the local people’s sense of their own wellbeing.

It started innocently enough, when the paper’s management decided to save space by dropping the weekly television guide. The uproar was instantaneous, because it emerged that this was a major reason why thousands of poorer readers did not throw out the local rag with the household garbage, but kept it all week, idly browsing through it during breaks in their television viewing. So the TV guide stayed.

In such an environment, I thought it might be possible to push the envelope a little further, for example by bringing to the attention of readers, those development proposals that might have an adverse effect on their own amenity and lifestyle, such as turning recreational areas into housing estates (always in the purported interest of creating ‘jobs’, which were never created).

But at the same time, it was essential never to editorialise about the worth of such proposals, only to provide sufficient information to help the person in the street start thinking for themselves. Instead of passively submitting to the self-interest of others.

One of my happiest initiatives was to begin a fortnightly series of profile/interviews with some of the more well-known figures in the community, such as a prominent clergyman, a community services director and a radio station manager, which, I hoped, might humanise power and authority, making it less awe-inducing, and thus encouraging otherwise timid people to feel more sure of themselves.

While the threat to withdraw ‘advertising’ was much less obvious on the NSW South Coast than it is where oligarchies rule, often out of sight of the elected local councillors, it can work in other ways, because, as it is said, money never sleep. For me, this took the form of scarcely veiled approaches from company executives to ‘give’ an advertiser some nearby ‘editorial’ copy in return for their placing an ad in the paper.

Even the most obtuse reader could see through this one: an advertisement on one side of a two-page spread, and an ‘bylined’ article on the other saying how good the product really was. I know this sort of thing does happen, but … give me a break!

As I said, in pushing the envelope I did sail close to the wind on occasions, and there was quite a bit of grumbling from company management about the need to be more flexible towards advertisers. But it never went beyond that, because there was clear evidence that the readership did respond positively to a more engaged form of local journalism.

One day, a local woman rang, requesting that I provide her with a copy of the latest issue; she explained that hers had been swiped from her letter box, while instead of picking up one of the thrown-away copies polluting the street, as in the past, not one was now in sight.

Second, when I rang the local member of parliament to advise that my period as editor was about to end, she said, quite openly, that she didn’t know whether to cheer or cry. That, to me, was a far higher accolade than to receive one of the many phoney awards behind which hack journos conceal their ‘hackness’.

Overall, we had our wins and we had our losses, and maybe the idea of encouraging a more self-aware readership in a very poor community, was a bridge too far. But I do know one thing for sure: very few copies of our paper ever went unread. Where that leaves other communities now that the doors to their local ‘voices’ are banging shut, I hesitate to guess.

Are you losing a regional or community newspaper? How often do you read the newspaper?