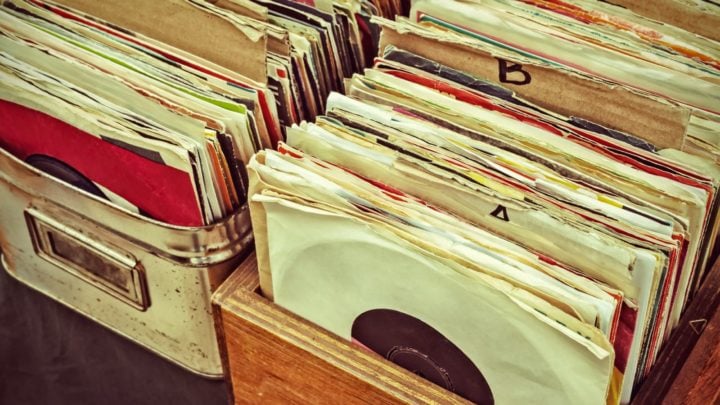 May couldn't bear to part with her vinyl when she downsized. Source: Getty Images

When I downsized three years ago in preparation for retirement I channelled Marie Kondo. If an item didn’t ‘give me joy’ I re-homed it. Clothes and kitchenware went to a charity store, boxes of books were donated to a local service club to raise funds for their literacy programs, and I made a few shackles by holding a garage sale on the front lawn.

I won’t lie and say it was an easy task. It was both physically and emotionally draining, particularly when it came to parting with mementos inherited from my parents, both long gone.

It was important to face facts and consider my daughters’ views. Would they display my father’s pipe collection in its handmade pipe stand? Would my mother’s crystal vase from the 1940s blend in with the minimalist interior design trends of today? My sentimental pieces did not equate to the sentiments of my children and so everything was either re-homed or tossed.

Decluttering is hard work though I was able to relocate with a clean plate. Except for my record collection. Vinyl LPs collected since the early 1970s fit perfectly into the removal truck and then into the new home. It didn’t matter that I no longer owned a record player, I was simply unable to part with this huge part of my history.

American singer-songwriter Stevie Wonder once said, “Music, at its essence, is what gives us memories. And the longer a song has existed in our lives, the more memories we have of it.”

It’s so true. I remember places and people from my past each and every time I hear certain musical tracks, don’t you?

Creedence Clearwater Revival reminds me of a girlfriend whose older brothers were huge John Fogarty fans. Another school friend played The Carpenters every afternoon after school when we caught up for snacks. My first boyfriend was mad keen on the Jonathon Livingston Seagull soundtrack.

“Sometimes it takes only one good song to bring back thousands of good, old memories.”

Friday nights were always special when I was a child, as this was the night my father would bring home a sixpence worth of lollies for my sister and I to share, and he and my mother would listen to music over a bottle of beer and a port and lemonade to mark the end of the working week.

Although I either re-homed or gave away most of my parents’ belongings I also retained my dad’s record collection. Much older than my vinyls of course, with some released in the late 1940s and 1950s — the music of Bing Crosby, Irving Berlin, Mario Lanza and Vera Lynn.

I still have the first record I purchased when I was 13 years of age. It cost $3.99 from Edels in Sydney and took me a good month of saving pocket money before I could afford it. I’m sorry: I’m a little too embarrassed to share any further.

“Each memory has a soundtrack of its own.”

I wanted to get married to the soundtrack of the television miniseries Against The Wind starring Jon English. Do you remember this one? Melodic yet haunting music that conjured up images of colonial times, it was simply beautiful. Something went dreadfully wrong on the day and I ended up walking down the aisle to the Number 1 hit of the day — Joe Dolce’s ‘Shuddup Your Face’. I blame that episode in part for my divorce, but that’s another story.

Have you heard of Silver Memories? Silver Memories is a special 24 hours, seven days-a-week nostalgia radio service for aged care homes. Based on Reminiscence Therapy principles, it is designed to improve the quality of life of residents in care.

PS. If you show me your first LP I’ll show you mine.

Do you remember the first record you ever purchased? What would be the one thing you couldn't be without if you downsized?