‘My heart has been shattered: Caring for my mother in her final days’ 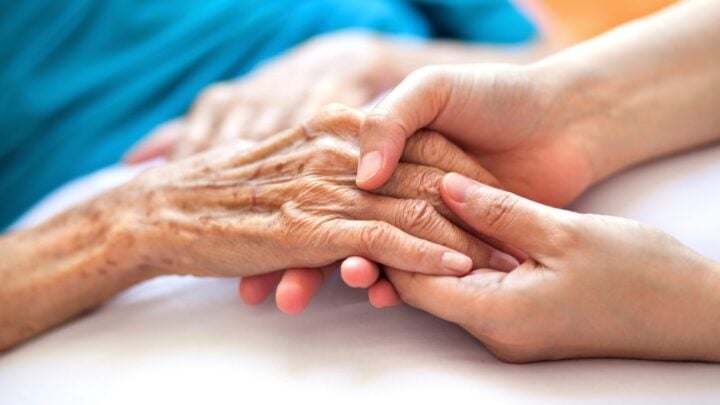 “I don’t think I have much longer,” my mother said, looking blankly at the wall. It’s funny how those who are dying seem to know it. It’s like a venetian blind begins to lower, the light simply evaporating out of the room.

Six months prior, Mum had gone into the hospital. It was Christmas when I got the news. My stepfather had called, explaining that he had to rush her to Loma Linda Hospital in California, United States. Apparently her cough hadn’t subsided since Thanksgiving, and his heroic efforts to revive her hadn’t worked.

They didn’t have a room for her, so they were holding her in the storage closet, along with those hospital gloves and cleaning supplies. I shuddered at the thought.

A few days later, they told us there was a spot on her lung. It was cancer. Years of smoking had caught up with her, and although she had stopped 20 years ago, the cigarettes had finally won. I took a breath. She was 86. That’s a long life, but still, it was my mother.

The next few months were torture. I saw my mum deflate like a Mylar balloon, drifting lower every week, the curled ribbons of her hair thinning and drifting to the floor.

I was the executor of her affairs. I had to be strong to implement her wishes, and keep the family balanced, which included her erratic husband. It wasn’t easy. Family dynamics are tested when the hub falls apart, and in this case, it was my mother. I had now become her lieutenant. The general was going down and soon I would be in
charge.

As she and I were sitting on the bed in the den, we exchanged pertinent information about her bank statements, important phone numbers, and other details I needed to know. She pointed to some figures related to her investments, and I could see a resigned look in her face. The sparkle that once danced when the family was around had started to dim. Yet even in her ensuing death, she remained pragmatic and efficient. My mother was always very organised, even down to her own death.

“Here’s whom you need to call to make arrangements after I’m gone,” she continued. It wasn’t said with sadness, but with the instructional tone of a teacher.

“If you want to sell any of my things, you could put an ad in the paper,” she added abstractly.

We shared a moment where a few tears were shed. It was too painful for both of us. We had a special bond, one that needed little explanation. It was a look we’d given one another during this seven-month torture of cancer. Perhaps she viewed me as a younger version of herself. God knows we were a lot alike. Frugal, understated, and interested in others. Maybe that’s why so little needed to be said. She had confidence in me, knowing that her wishes would be well handled in her absence.

There was work to be done. Someone would have to take charge and add levity to the situation. It couldn’t be my stepfather or any of the other family members who would be too volatile. It could only be me. I was honoured, and also scared.

“You’re mother’s taken a turn for the worse,” Eddie cried into the phone. “I think you’d better come,” he pleaded.

Maybe it was more of a cry for himself than for her. He was reticent to admit that he was on the verge of collapsing after being her caregiver the past several months.
I rushed to the hospital the next day to find my mother weary from a night of prodding, pills and tubes. Where was the mother I had known two days ago?

She was tired when I arrived. I managed to feed her some apple sauce and lukewarm oatmeal. Eating had become a chore after months of chemo and radiation. Food held little interest. I looked at my spreading thighs and wish I had the same problem.

The oxygen paced in the background, flooding a bit of life into her nostrils as she dozed in and out of consciousness. My stay was brief. She needed her rest. I felt guilty and helpless as I pushed through the turnstile of the hospital doors.

Three days later I returned. Her condition had deteriorated. The wind had left her sails. She was barely breathing without the help of the oxygen, her mouth agape like a fish out of water. Her eyes flickered slowly like tired moths.

The hospice team gave us a pamphlet regarding the final stages of dying. It was our family’s gospel for those last few days.

There was a roster of physical signs she could exhibit. My mum had already begun showing some of them.

“Do you see people in the room?” She nodded, yes.

She named several relatives, her son and first husband, and a friend from college. I’m sure they were showing her the way. She seemed comforted by their apparent presence.

The next day, she was in and out of cognition, her eyes at half-mast, and her mouth looking like a wide entrance to a cave. Her feet had begun to cool and stiffen. Her skin was the colour of cement. This was another sign, as the body begins to shut down. Again, we thought this day would be her last. All of us sobbed, on and off,
stroking her hands, her hair. Some of us were lying in bed with her. She barely responded to any of us as the oxygen wheezed feebly.

For some reason, I thought I should try singing to her. I began ‘Unforgettable’ by Nat King Cole. Slowly my mother began to mouth the words to these songs. Like a cactus that had been watered, she was revived as we all sang in unison, her mouth mimicking those few words she remembered.

Remarkably, she came home the next day. She had told us that wanted to die in her own home, so perhaps she was holding out for this. The hospice van arrived, the maid looking on helplessly as the hospital staff mechanically delivered her into the house.

Oddly, she wanted to make sure funeral arrangements had been made. Mother, even in this state, was forever the pragmatist.

“What about the funeral?” she inquired in a breathless whisper.

“Well, you’re being cremated,” I began, like I was giving directions to a lost traveller. “We will have a small service for family and friends. Your ashes will be put in the niche next to Hal’s.”

Knowing she’d be laid to rest next to my deceased brother seemed to put her at ease.

After my explanation, she nodded and dozed back to sleep, her mind blunted by the morphine. An hour later, she motioned to my partner Erika and me that she wanted to sit up. I began massaging her feet, exclaiming at how strong she was. I put her foot on my shoulder and she began pressing into me. So I placed her other foot upon my other shoulder, and she began pumping me like one does on those machines at the gym. This lasted about five minutes before she grew tired, and we laid her down again. Sudden bursts of strength were expected, according to the hospice pamphlet.

“Would you like some chocolate ice cream?” I offered.

Surprisingly, she did. I brought back a scoop, and fed it to her like she was my sickly child. I praised her for finishing the bowl.

The hospice manual cites that the dying have cravings for their favourite foods. My mother loved chocolate. She seemed at peace for the moment.

Erika and I looked at one another. We needed to get back to Los Angeles as we had left our animals alone for the past few days. Still, I felt guilty about leaving.

“We’ll see you in a few days,” I said with false conviction. I wonder if she knew that today would be the last time I would see her in a physical form.

Mum, propped up in her hospital bed, waved to her from across the room. Even with her eyes at half-mast, it seemed she could still see everything.

“See you soon,” I whispered, kissing her forehead. I couldn’t say goodbye. That was too final. Besides, I knew her journey was a passage. She was exiting physical form, but I knew she’d be with me in another way.

The next day when I phoned, my twin sister Teresa told me Mum had been in a coma most of the day.

“Are you sure she’s just not sleeping?” I asked.

“No, she not sleeping,” she said. Being in the medical field made her aware of the nuances of death. I had a bad feeling inside, but I tried to remain optimistic.

That afternoon I called again, but my sister told me Mum was still motionless, aside from her laboured breathing. A nurse was summoned as her condition “had changed”. Teresa told me she’d call me after the nurse had left. It was 3:30pm. I hadn’t heard from her and I was ready to call it a day, when something prompted me to call again at 3:55pm.

“Mary, oh Mary, I think she’s going” came the cry from my sister who answered the phone.

“Just keep the phone in the room for me please,” I begged. And from there I listened. For 15 minutes, I listened to my mother passing, released from her crippled leg from too many failed operations. I listened, as my sister described how her face paled, her veins flattened and her extremities turned blue. And I wondered. What made me call? Perhaps she wanted to include me in her final passage. Perhaps she wanted me to help her reach the other side.

In the weeks since she has passed my emotions exploded out of nowhere. My heart was shattered in a way no one can describe. It’s like the roof being blown off your only home. It’s like someone has cut off your leg. It’s the helplessness of a rudderless boat in a violent storm.

I am still reeling in all of this, determined to carry out her wishes, hold my head high, and do the right thing. I know my mother is within me, as I mediate between the family forces that have got out of hand. I am holding my head high, in honour of my mother, in her final days.

Have you lost a loved one? How did you cope?