‘Manners, service and respect: I miss the good old days’ 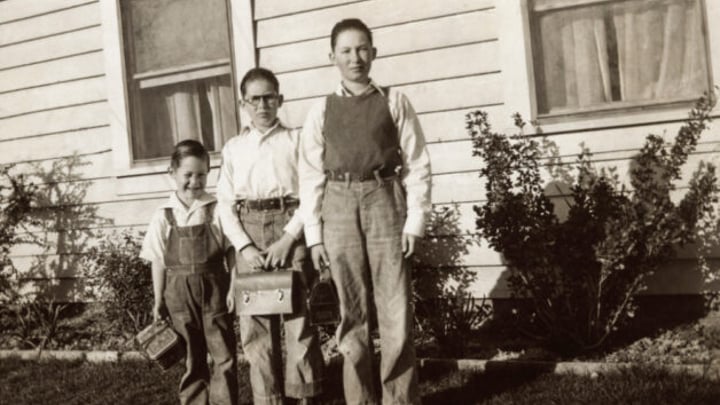 There's a lot to be said for living in simpler times. Source: Getty

Some people reckon we have come a long way since the beginning of the 20th century, but I confess I’m not so sure. Oh, I know we have all the modern wonders of smartphones and computers and cars that can be sent out on their own and little round gadgets called Alexa on the mantelpiece that can carry on quite an intelligent conversation, but at what cost?

Being fairly old, I can remember the times before supermarkets, when a grocer looked after you, on a one-to-one basis, rushing about his shop getting everything you required on your behalf, when you didn’t have to put petrol in the car yourself – someone was waiting there to do it for you, and he’d clean your windscreen and check your oil too, all at no extra cost. It was a time when kids could be left outside playing until it was almost dark, a time when a man with a long pole came round turning on all the street lights, in fact it was an easy, trustful sort of life, a time when you didn’t need to lock your front door if you went out and a time when most of what we ate was natural, not processed, homogenised, substituted or irradiated!

It was also a time when telephones were telephones, not cameras or computers, and the service, primitive by today’s standards, was at least reliable! The roads were much less congested than today too, with no freeways; but at least the road surface was usually very good and we were well looked after by AA officers on their smart motorbikes and their friendly salute at sight of your membership badge.

Today’s aircraft, stupendously larger than in the thirties, and frighteningly fast, have taken the excitement of flying. Airplanes are just a bus in the air now and just about as impersonal. Before the war, everyone dressed up to fly. In fact, casual wear wasn’t even allowed on a lot of aircraft and it was only the rich who could indulge in such luxury, despite the fact that in many cases the seating was in the form of basket-wear of the sort you’d find in someone’s garden, not even bolted to the deck. But it was certainly an adventure!

There was also a much more pronounced sense of duty and respect for others to be found in those far off days; a gentleman wouldn’t dream of letting a lady stay standing on a bus, as we often see today, with teenagers sitting playing their electronic games while some elderly lady with a walking stick stands in front of them. Even walking along a footpath with a female friend required the male to walk on the outside, so the lady’s clothes wouldn’t be splashed by passing traffic, and the hat (no man would be seen without out one, just look in old photographs), always had to be doffed to a lady and removed on entering any building.

I have no memory either, of whole populations of people rushing off to the shops, buying every roll of toilet paper they could get their hands on, causing a shortage where one just didn’t exist. It’s called panic-buying and even during the last war no one indulged in such idiocy, even though the shortages were genuine – there was queuing indeed, but it was a much more civilized affair, handled with grace, because everything was in short supply then, thanks to the efforts of German submarines and bombers.

Yes, I suppose we have gained in many ways in today’s frantic, uncaring, self-thinking world, but I am very grateful that I have seen things done as they should be, with courtesy and respect, even towards people I had never met before and was highly unlikely to ever meet again. It makes me a little sad, not just for me, but for the youngsters just leaving school and entering a world where very few give a damn about them and their success or failure in life. I can’t help thinking George Orwell was pretty near the truth with his frightening book, 1984, where the Government had total control over the minds and bodies of every citizen – it seems to be happening already in Hong Kong! I’m almost glad I am too old to be around when all this attitude bears its unfortunate fruit, in twenty years or so!

Do you agree with Brian's sentiment?