‘LBJ and me: How I came to rub shoulders with America’s accidental president’ 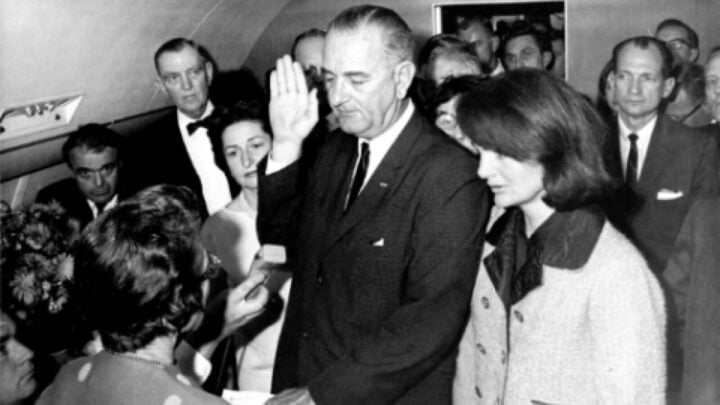 In the aftermath of the assasination of US President John F. Kennedy, American politician and Vice-President Lyndon Baines Johnson takes the oath of office to become the 36th President of the United States. Kennedy's widow, Jacqueline Lee Bouvier Kennedy stands beside him. Source: Getty

One of the great fantasies of the reptilian mind, is the notion that as close as you are to the sniff of power, money, celebrity, whatever, you can get a little closer still. That fantasy, allegedly, turned into reality when Hollywood released Marilyn and Me, the 1991 bio-flick about journo Robert Slatzer’s supposed marriage to screen gem Marilyn Monroe.

Why, I wondered, had not Hollywood decided to craft such a bio-flick about Lyndon Baines Johnson, who towered over the world like Atlas during the 1960s and, unwittingly, presided over a social transformation that is still playing out to this day. Johnson, the 36th United States president, was better known as LBJ, in that uniquely American infatuation with three-letter shorthand – think FDR and JFK. Richard Nixon, however, never reached the lofty heights of RMN, having to be satisfied with Tricky Dick.

So, LBJ and Me would be a suitable case for treatment, it seemed to me after watching the six-part SBS series The Clinton Affair which saw another period of high hopes dissolve into the grubby gutter that has given politics such a bad name over the past half-century.

Well, as Hollywood has not yet risen to the occasion, I am going to sketch out my idea for LBJ and Me, based on my own limited (let’s be honest, fleeting) contact with the Texan colossus. No, I wasn’t there when LBJ yanked up his shirt to display his gallbladder scar to the assembled press corps. And no, he didn’t drawl, “Hey, Rard, is it okay to hoist Him and Her (his pet beagles) up by the ears?”

Actually, I had not heard of LBJ at all until 1958, as Australians of my age were so beguiled by British savoir-faire that we barely understood our existential security was now in the hands of the very cigar-chomping cowboys who dominated our “Sat’dy arvos” at the “Esquire” or the “Palace” or wherever God decided to plonk a movie theatre.

Then, in November 1958, a radio news item reported that the US midterm congressional elections had seen a huge swing to the Democrats, putting in peril the Republican Party’s hold on the White House. That was enough for my father to conclude that the Labor Party must have seized control of America, to him an appalling prospect given form by the subsequent election of JFK (John F. Kennedy) in November 1960.

At that stage, I suppose Johnson was seen as the steady hand on the tiller behind the dashing movie star from Boston. But it was not long before JFK, himself, catapulted to stardom Down Under, by offering such an attractive contrast to the stuffy Royals and the sclerotic Aussie leaders, Bob Menzies and Arthur Calwell.

And when our new hero was assassinated in November 1963, LBJ stepped up and, as a hard-nosed operator, was believed to have the heft to implement policies that reflected JFK’s idealism. Even the Vietnam War was not immune from glamour, I believe, being the expression on foreign shores of this same reinvigoration of American liberalism which had lain dormant since the early days of the Cold War. (Pity they forgot to tell the Vietnamese.)

In any event, when LBJ came to Australia in 1966, he landed at Fairbairn RAAF base, Canberra, on October 20, to be greeted by an adulating crowd. Whereupon, he proceeded to do the big US politician thing, working that crowd, shaking hands, slapping backs, murmuring “How y’alls” until he came upon one hand. Drum roll. Zoom camera. Faint strains of ‘Hail to the Chief’ in the background. Whether LBJ knew it or not, there was a 22-year-old attached to that hand. And that was the first fleeting moment in our shared lives.

We all know what happened next, when LBJ’s Great Society ended with a big bang (actually, many of them) as scores of Vietnamese cities, towns and villages were overrun by the Viet Minh in January 1968, popping the bubble of US victory, and ending Johnson’s presidency a few months later. He left office in January 1969 a much-diminished figure.

It says something for Tricky Dick Nixon, though – perhaps best described as throwing the baby out with the bathwater – that LBJ had a bit of a revival almost immediately and so, when I went to the States shortly after, curiosity found me on a Kerrville bus heading west out of Austin, deep into the dusty lands of the Texas Hill Country.

Before long I found myself picnicking beside the Pedernales River, just across the water from the LBJ Ranch. I remember it as a bitterly cold day, even in central Texas, but I was cheered by the sudden arrival of a helicopter. From out of a building, strode a tall man beneath a John B. Stetson hat. I waved, but he appeared not to recognise the hand from three years before. That was my second (fleeting) encounter with the great man.

Alas, his redemption proved to be short-lived because in 1971, a chap named Daniel Ellsberg decided that the American public, and the world, including me, deserved to read the secret report on Vietnam that subsequently became known as the Pentagon Papers. When LBJ died eighteen months later he was again a reviled and soon-to-be-forgotten figure.

A decade later, when in the States again, I visited the Arlington National Cemetery (and the Kennedy grave), across the river from Washington. And then took a walk around the nearby Pentagon (just like Norman Mailer’s Armies of the Night of 1967). Those who’ve done it will know that, paraphrasing Tricky Dick on the Great Wall of China, it is a very big pentagon.

Fagged out, I spotted a shady grove of trees beside the sparkling water of the Potomac. It was a pristine day and I was just beginning to unwind from my exertions, when I heard a voice. A voice I knew well. I looked about but saw no one.

Yet, it was her. Lady Bird Johnson, wife of the late president, her voice flowing surreally but clearly, out of some garden bed, or from the crown of a tree, or was it seeping from the huge granite plinth which I then noticed, a memorial to Lyndon Johnson, a man whom she had said many times before, loved the people, to whom he always offered a helping hand.

I don’t remember exactly what Lady Bird said but as her voice had been activated by my own arrival, I cannot help believing (to the marrow of my bones) that it had something to do with a hand offered in a crowd a long way from Washington and a long time before. It was the sort of voiceover that would embellish a Hollywood blockbuster. Like LBJ and Me.

What do you remember about LBJ's presidency?