‘Kids and cafes: A marriage made in heaven or is it utter hell?’ 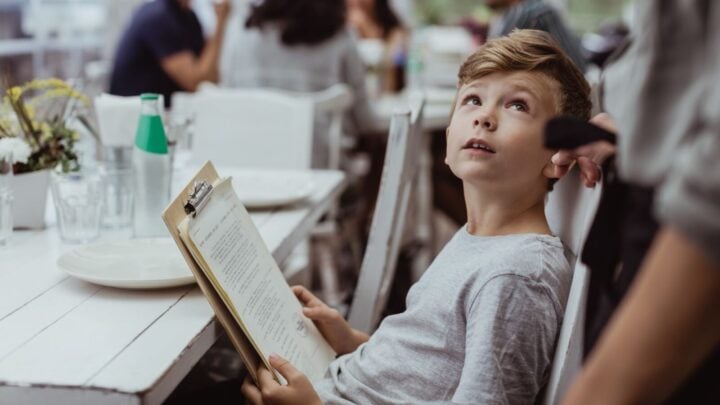 Karen's not a fan of children being dragged to cafes and entertainment venues. Source: Getty Images

A long time ago, last century, mums and dads had children who usually were quiet and obedient. Children were generally fed at home and put to bed at a reasonable time. But then the 21st century happened, parents still had children, but parenting had an overhaul, and kids (and dogs) are now toted to every café, fine dining establishment and places of entertainment. Strapped into the back of the SUV in their space-style capsules, dressed to the nines in designer baby and child gear, little dears now accompany their parents everywhere. In fact they are the perfect designer accessory.

In case you think I’m a bitter old dear, I am not. I have a few grandchildren, who often do not behave well in cafés or restaurants. However, my kids being the sensitive and thoughtful parents they are (they got it from me) read the vibe and reaction of the others diners and remove the screaming or howling child so others do not have to put up with it.

What inspired this Nana blog, is that my friend and I had a couple of days away recently and were out for breakfast at a groovy café, which had an upper level. It was the beginning of school holidays and a whole family with young kids sat upstairs. The noise from that table was so loud it drowned out the music. The kids rushed up and down the stairs, swung from the railings, nearly fell into my eggs benedict, and hollered at the top of their lungs. The parents were oblivious, captivated by their respective phone screens. Even the waitperson delivering hot meals had to dodge the little darlings.

Even when we went to a flash joint for dinner; tired, overwrought grizzling kiddies drooped from their high-tech child carriers or crawled under the tables looking for their dropped chips or toys. Hardly restful.

I am not a moaning nana, not really, but years ago we had something called a ‘babysitter’. We paid them money, they minded our kids and we went out for the very occasional dinner. Other time we were in a babysitting club and had a points system where we had hours allotted in response to our hours served. It worked a treat.
Adults went out and enjoyed a nice quiet meal without an accompanying soundtrack. Now kids go everywhere — and I mean everywhere — they are the latest accessory with the designer doggy in tow.

Recent school holidays have families travelling and of course they all have to be fed, as often accommodation does not provide a cooking facility, and anyway — who wants to cook on holiday? Not Mum or Dad. And the fast food places are not good as a permanent choice.

Our world has changed, I know it. A coffee and a catch up with a friend in a nice local café is now accompanied by writhing and whining toddlers who leave most of their expensive French toast on the plate. I trip on a designer doggie lead, or the high-tech wheel of the latest pushchair, listen to Peppa Pig at high volume on a tired mother’s phone as she tries to catch up with her bestie. Give ’em Weet-Bix at home I say, and meet at the playground or perhaps reinstate the babysitting club.

I ask you — kids in cafes, is it heaven or hell?

What are your thoughts on this topic? Do you agree with the writer?