‘Humiliations galore: Why Trump will end up with egg on his face’ 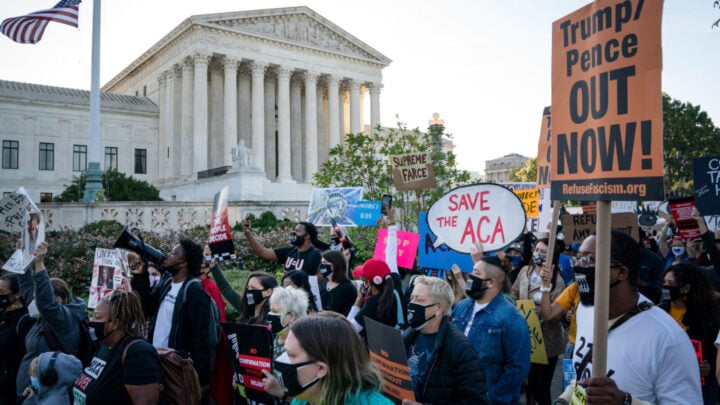 Trump and the Republican party's attempt to overthrow the vote for Biden is damaging to both the country and the party. Source: Getty

Donald Trump wishfully thinks that having blackmailed other Republicans to support his coup attempt to overthrow the Electoral College vote for Biden in the Congress on Wednesday, January 6, he can somehow once again escape from being removed from presidency – like he did when the House impeached him and the Republican dominated Senate saved him of removal from office in February 2020.

To achieve this, he has also put maximum extra-legal pressure on all members of the Congress to intimidate them, by inciting his followers – prominently including the violence-prone private militias – to parade ‘wildly’ in front of the Congressional building while the Congress is in session in Washington on January 6.

Except this time, Trump has Buckley’s chance of succeeding, as the Constitution is firmly against him. The Republicans will force a debate about the Electoral College vote in both chambers, but even if the Senate dares to vote to overturn the people’s election verdict and they succeed in carrying the Senate, the fact that the House (with its Democratic majority) will vote for Biden, will ensure the defeat of the Republican coup attempt. This is because the Constitution requires both chambers to vote against the results of the Electoral College vote before the results can be overturned.

Trump will end up with egg on his face because his coup attempt to overthrow democracy will fail. Trump’s humiliation will be compounded, as his removal from his office will be finalised by no lesser of an insult than that of his Vice-President Pence declaring Biden as the president to replace him.

But Trump and his Republican allies still want to go through this Congressional coup attempt farce, to appeal to Trump’s base, who want to believe that their idol was illegally robbed of victory.

Ultimately, it is Trump who is his own and the Republican party’s worst enemy. His delusional narcissism has seriously damaged both the US and the Republican party. Right up to the critical Georgian Senate election on Tuesday, January 5, he is viciously attacking all Republicans, including the Georgian Republican leaders and election officials who refused to join him in his coup attempt. Such attacks, together with Trump’s populist demand for the $2000 one-off relief for people that senator Mitch McConnell and his followers in the Republican party opposed, gave the gift of a lifetime to the Democratic party to wedge Trump against his own party.

What the voters of Georgia are witnessing is a deeply divided Republican party on the eve of the critical Georgian Senate election. Trump’s dividing of his party and his continued rejection of the validity of the votes of the Georgian electorate against him, can only help the Democrats fulfil their hitherto impossible dream: to win both seats up for grabs in the Georgian Senate election.

And once this happens, the Democrats will control both chambers of the Congress, thereby enabling Biden to implement his agenda and wipe out all of Trump’s legislative legacy. So then Trump not only will have succeeded in losing the presidency but he will have disempowered his own party too – to such an extent that it will be hard for them to become relevant again for some time to come.

What do you think will happen this week in the US?