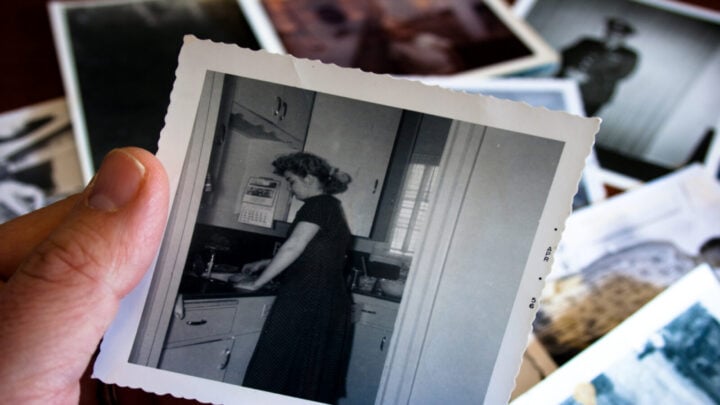 Last week I burnt my porridge so I covered the burnt area at the bottom of the saucepan with water and put it outside for 24 hours. After that I was able to give it a scrape out and get it nearly as good a new – and without having to use much elbow grease.

That reminded me of Mrs Wilkins who neighboured my parents’ home in England. I remember her telling me how, when she was a girl and went into service as an assistant cook, washing up was part of her tasks. She told me that the cook wasn’t one of the best and was always burning the saucepans but insisted they were cleaned out straight away; she wouldn’t allow them to be left in soak.

The day came when, prior to marrying young Mr Wilkins, she did become a cook and later, in marrying Mr Wilkins, they were employed by a wealthy widow to take care of her house and garden and for Mrs Wilkins to cook the meals. When a baby girl came along the widow welcomed her into the home and later paid for her schooling. Not only that, but she paid for my parents’ building firm to construct a house to be given to the Wilkins upon retirement. Meanwhile, it was rented out on short leases. When she died, Mr and Mrs Wilkins and their daughter moved into the home she had provided for them.

However, others who went into service were not so rewarded. Mrs Sage was only given a vase as far as I know! She came as our ‘daily help’ but she was more of a housekeeper because my mother was out all day working. As a girl, Mrs Sage had passed her 11-plus and qualified to go to grammar school but her parents couldn’t afford the uniform let alone the extras entailed, so at the school-leaving age of 14, she went into service until she married. Later after the birth of a baby girl, she went out to work for a few a hours as a daily help and one of the jobs she took on was of cleaning houses built by my parents’ firm. She got them ready for the buyers to move in. It was later that she came to work in my family home.

Ah, how I enjoyed talking with her as I helped shell peas or slice runner beans. And what a treat it was when we came home from school on baking day. There set out for us on the kitchen table were sausage rolls and her special recipe cakes, pastry tart bases with bun filling and the extra treat of a jam filling in the middle. Once a week on Fridays after school, my sisters and I would go to her home where a pile of comics waited for us. Mrs Sage’s husband bought the Eagle, Dandy and Beano for himself and girls’ comics for his daughter, so we had plenty to read and take home with us.

Apart from the effort of giving us tea, our visits were of no bother to Mrs Sage as we simply sat and read while she plied us with cups of tea and sandwiches. Sometimes the sandwiches were just filled with lettuce. We preferred more meaty ones but we were hungry and they filled the gap. When I was older, she gave me the vase that she had been given. She didn’t tell me of any other gifts bestowed on her – certainly not a house or private education for her daughter.

Eventually, because the terrace house the Sage family rented was to be pulled down, they were moved to a brand-new council house. That’s when she gave up working and Rose came to be our housekeeper. Mrs Sage kept on the job of cleaning the newly built houses for buyers.

Rose had been in service as a cook until she married Doug, who worked for my parents’ building firm. My mother asked Doug if his wife would take on the job of our housekeeper and because the tax on women’s wages was high in those days (the tax rate was based on household income) my parents proposed Doug would be paid more so he would be granted a mortgage and Rose would just be given a token wage with the arrangement they could buy one of the bungalows that was being built by my parents’ firm next to a council house estate in the village where we lived. They were to have the first bungalow at a reduced rate because it was next to a council house. Several years later they were pleased to tell me the monthly repayments of the mortgage loan was much less than council house tenants’ rent.

I asked my pen-pal, Starts at 60 blogger Sue Leighton, if she knew anyone who’d been in service. She replied: “My (Kiwi) ex-husband’s grandmother, Susannah McIntosh (nee Wallace), was in service whilst a young girl in Scotland. She was a lady’s maid.”

“She met her future husband, a coachbuilder, and they married and emigrated to New Zealand, settling in Methven in the South Island, outside of Christchurch. The ‘old duck’ (as everyone called her) lived until she was 103 years old, had an audience with Prince Charles, and was cared for by Jose (my mother-in-law) for most of her later years. She was a lovely lady, having had four children and adopting another.”

I‘ve now learned I have a family link with my pen-pal as it so happens that my great-grandmother was from the Scottish clan of Wallace. It’s amazing how life is full of coincidences.

Do you know anyone who worked in service?