‘Do we really need all these medications the doctors prescribe?’ 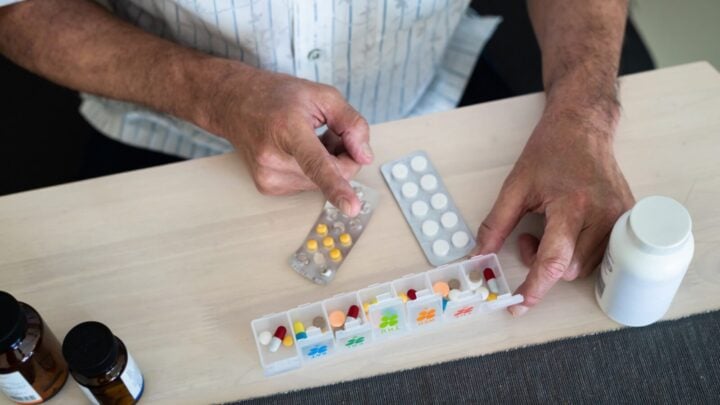 Mary says one of her friends has been prescribed a mind-boggling arsenal of pills. Source: Getty Images

Recently, I was chatting with one of my retired pals from my improv class. He was only in his early-60s, but his arsenal of pills was mind-boggling.

“I took the first one to counteract depression. That one gave me the shakes. I then started on another pill for my trembling, and it made me pee all the time. Now I’m on something for my incontinence, which gives me a constant brain fog,” he said.

We both started laughing before we did another improv exercise together. Thank God for humour. It gets us through the worst of times.

So many of my retired friends are at the mercy of their doctors who have convinced them that popping pills is the remedy to better health. Most of them put these doctors on a pedestal, as if their recommendations will give them a free pass to heaven, or at the very least, some extended longevity.

I’m reticent to go to the doctor unless it’s serious because every visit includes a prescription or some complicated test. How often do they suggest a cheap way to get better? There’s usually a scribble involved, and you’re left believing that their scrawl will miraculously make you better.

Sometimes it does, and other times, you feel worse.

A few years ago, I was having terrible anxiety related to a flood in our apartment. I saw a few doctors, and each of them gave me a different explanation.

“Your brain scan was abnormal,” one began.

“I think you suffer from depression,” suggested another.

“Maybe we should do an ultrasound,” was another suggestion.

All of them gladly wrote me prescriptions, but when I looked at the side effects of the medications they advocated, they sounded worse then the maladies I was experiencing.

I declined the Advair. I said no to the Lexapro. I couldn’t even pronounce Varepamil, let alone figure out just what it was supposed to do. And those are just a few of the medications that were suggested.

Over time, I figured out that what I had was a case of post-traumatic stress disorder (PTSD), and I decided to ride it out. The anxiety eventually dissipated, and I was glad I never participated in that pill-popping remedy.

I’ve heard doctors just want to cover-the bases so they don’t get sued, which is why they usually write you a prescription or suggest myriad tests. Are they really necessary? Who knows?

A test or a script is a quick remedy. Doctors are slammed with insurance reimbursement problems, which partially explains why they spend so little time with you. My primary doctor is going the concierge route because he makes so little money off of Medicare (I live in the United States).

Toward the end, he barely spent 10 minutes with me. His eye contact was fleeting, like he was speed dating.

One time, I waited two hours to see an orthopaedic doctor. I spent three minutes with him. I heard it was because he was triple-booked.

Were our parents treated this way by their doctors when they were our age? Were they this sick as they entered their senior years? Or are we in worse shape due to climate change, political upheaval, GMOs, fracking or something else?

Our parents didn’t talk about gluten intolerance, yet it runs rampant in our culture today. More illnesses lead to more pills, until some people claim their medicine cabinets look like small pharmacies.

Here’s another interesting point. An article I read published by Business Insider a few years ago claimed many doctors receive compensation for prescribing certain medications. It was one of many that revealed speaking engagements, gifts, travel and other rewards are a nice incentive for a doctor to recommend a drug.

Personally, I’m doing my best to stay off of prescription medications. I’m experimenting with a few of them, and hope they are short-lived protocols.

I prefer supplements rather than taking a bunch of medications. I exercise, drink in moderation, and eat well. I also try to remain positive. Most of the time, the body can often heal itself.

As for my pal at the senior centre? I wonder if he would feel better if he cut back on all his medications. At the very least, it would make a great story for improv.

Are you concerned by the number of prescribed medications your take?