Debate debrief: ‘Does the vice presidency really matter that much?’ 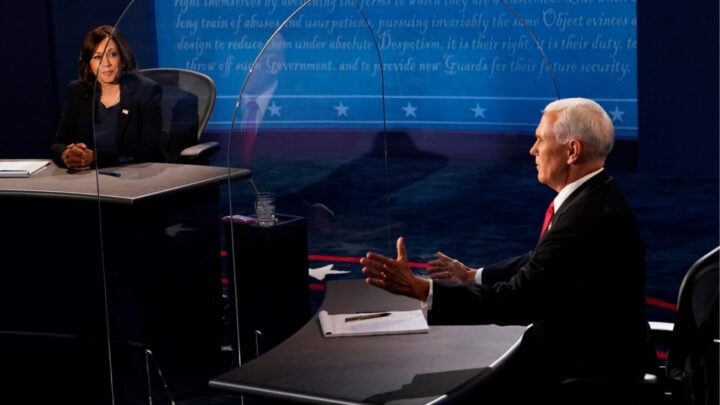 I woke this morning thinking of ‘Cactus Jack’. Who is Cactus Jack, the curious may ask? And why would you wake thinking of him, unless he owed you money.

Okay. Cactus Jack is better known to history as John Nance Garner from the Rio Grande River valley town of Uvalde in western Texas. He was the local congressman until elevated to the Speakership of the US House of Representatives when the Democrats took control of that chamber in 1930 in the aftershock of the Wall Street crash.

Under embattled Republican president Herbert Hoover, Cactus Jack held a lot of sway in Depression-ravaged America, so much so that New York Governor Franklin D. Roosevelt persuaded him to become his vice-presidential running mate in the forthcoming 1932 election.

Duly elected as the veep, Cactus Jack served restlessly until booted off the 1936 Democratic ticket by an FDR concerned by rumblings of dissent further north along the Mississippi valley. And that’s where Cactus Jack’s historical mark might have ended. But no. Twenty-four years later he received a phone-call from Lyndon B. Johnson, another power in Texas politics, seeking his advice on the offer of the vice-presidential spot on the 1960 Democratic ticket to be headed by Senator John F. Kennedy of Massachusetts.

And Cactus Jack’s advice? “Lyndon,” he supposedly drawled, “the vice-presidency ain’t worth a pitcher of warm spit”. Johnson, as history knows and the Vietnamese people still remember, did not take this viscous advice.

Although it should be said that, like me, Lyndon Johnson may have had difficulty imagining a pitcher of warm spit, his actual response to all those allies, like Cactus Jack, who warned him against giving up the real power of being the US Senate majority leader for the illusory fig-leaf status of the vice-presidency, says so much about the world as it has evolved over the past 60 years: “Power is where power goes,” he replied archly. Wow!

And that is why it took 24 years after the first, epochal, presidential debate for a debate to be held between the VP candidates of the two major US parties before the cameras and the American electorate. Given the historically low esteem in which the vice-presidency was held by the American political elite, it might not be surprising that it took so long to put the respective candidates firmly in the spotlight.

But things had changed since 1960. For the events in the then recent past had demonstrated that the number two spot on the ticket could actually matter, being only a heartbeat away from the Oval Office, as a growing number of pundits were calling it. First, there was LBJ himself, assuming the presidency in November 1963 upon the assassination of JFK and then being unable to cope with the mushrooming war in Vietnam.

But I think the vice-president who focused American minds on the potential minefield of the second-highest office in the land was not LBJ but Richard Nixon’s deputy, Spiro Agnew. While previously governor of the state of Maryland and before that, the chief executive of the city of Baltimore, this execrable figure managed to compile a veritable fortune in corruptly obtained lucre.

Yet, like Al Capone, when he went down in October 1973, it was only for tax evasion. If, however, he had been able to keep the gathering posses at bay long enough, he might even have become president, as it was only a few months later that Tricky Dick himself was driven from office. As the Duke of Wellington said after Waterloo, “it was a close-run thing”.

So unstable was the American political scene in those years that there were actually four successive vice-presidents in just three years, every one of them “a heartbeat away from the Oval Office”, making it hardly to be likened anymore to a pitcher of warm spit. Thus, in 1984, the first vice-presidential debate was held, to be followed by eight more.

Over the intervening 30-odd years, the consensus has been that little of note or attention-grabbing has emerged from these second-string debates. But 2020 is different. Not only were Mike Pence and Kamala Harris on stage with the moderator, USA Today’s Washington bureau chief Susan Page, so also was Donald Trump.

Not physically, of course, but his presence, as ever, loomed over everything and everyone. And, while the occupancy of the vice-president’s suite is viewed more cautiously now than it was in Cactus Jack’s time, today’s debate was, in my opinion, more like what you would have expected in 1932 (if there had been one then) than in any of those held after the close shave of a Spiro Agnew presidency finally registered with the American psyche.

Neither Vice President Pence nor Democrat Senator Harris said a word likely to ruffle the feathers of their party’s top dog, but nor did they say anything that would make either stand out as a star in waiting. An uncharitable observer might say that if Pence had set out to bore his audience to death and Harris to smile them to paralysis, both succeeded.

Indeed, it would be interesting to hear the results of any compilation of the most used words in the debate. I, for one, have little doubt that for Pence, the undisputed winner would be “Donald” and/or “Trump”, and for Harris, “Joe” and/or “Biden”. Loyal deputies, as you would expect, because if they weren’t the system would collapse under its own rickety weight.

Both have watched last week’s presidential debate and learned much from its vitriolic exchanges, particularly the need to avoid such exchanges. For, while there were a number of issues touched on by the Q and A format, like taxes and affordable health care, any of which could have bared the claws of either candidate, both stuck to the anodyne script.

For my part, the only moment of interest came when Page asked each in turn about how they would respond should Trump’s long-hinted threat to hunker down in the White House after losing the November 3 poll, were actually to eventuate. Pence and Harris, however, were both skilled practitioners of the politician’s fine art – the ability to give heart-felt, forthright, almost inspirational answers to the question that was actually not asked.

And who emerged as deserving to be closest to the fatal heartbeat in the Oval Office? That’s up to the American people.

Who do you think would make a better VP?