‘Covid complainers wouldn’t have lasted a day during WW2’ 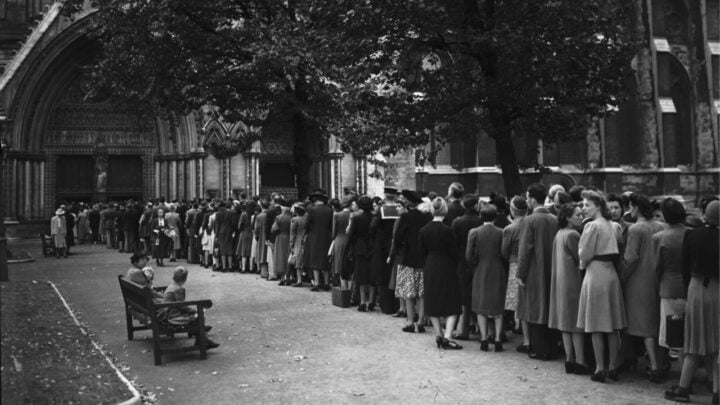 Crowds line up to enter Westminster Abbey on the National Day of Prayer, 3rd September 1942. Services were held all over England, at the request of the King. Source: Getty

Can you just imagine for a moment, walking out of your home to the family car, getting into it alongside your husband/wife, and four children plus the dog, and driving off in the sunshine to a point somewhere or other, which you haven’t even chosen yet? You’ve thrown the picnic basket in the boot, filled with all the makings for a picnic, and you’ve brought along everyone’s costumes, just in case you finish up somewhere by the sea. As you drive off, you see that several of your neighbours are doing the same as you, taking advantage of the weather, which is rather good, for the time of year, also piling families and goodies into their vehicles. And everyone is laughing and shouting, glad to be living in a country that provides so much freedom, for everyone, free of charge!

I know, after months of Covid-19, it can be quite hard to have such cheerful thoughts and memories for some people, but I believe it is such thoughts that will help to keep us all sane for, possibly, the next six months or so, until someone has found a way to defeat this monster that is attacking us with such venom!

And if you think we’re hard done by now, cast your mind back to 1940-1945, if you can. Oh, I know, there aren’t an awful lot of us left from that period, but I would think that even the younger ones among us will have a pretty good knowledge of the war years and what we had to put up with then. Little problems like hearing, night after night, the throbbing drone of Nazi aircraft and all the nice presents they had for some of us, tucked up in their bomb-bays. You could always tell German aircraft by the noise they made, a noticeable throbbing, which British planes didn’t make – something to do with the different way the multi-engines were tuned, we were told, though I don’t know if that was true. To add to everyone’s fear, we were told you didn’t get to hear the bomb that was going to hit you; if you could hear the wailing noise their fins made as they fell to earth, that meant it was heading for some other poor bugger, and you gave a sigh of relief, trying not to think of the ‘silent’ one that might even now, be only a thousand feet above your head, wailing for everyone but you!

Then there was the hardship of food. Everyone knows about rationing, but experiencing it could be a bit of a strain! The ration provided just enough of the necessities of life to keep you fit and well, but it provided none of the little luxuries, things we don’t even think about now, ‘luxuries’ like bananas, prime steak, lashings of butter to go on toast, silk dresses for the ladies, Harris tweed suits for the gents and adequate petrol to make it worth-while taking the car out of the garage! There were foods I sampled after the war that I had never tasted before, pretty well anything that had to be imported ceased to exist with the first air-raid-siren, and weren’t seen again until a couple of years after the war ended. But at least we all kept slim and well, none of the obesity most of us suffer from now, we’re actually suffering from too many goodies now!

I tend to forget sometimes that all the transport we enjoy now, was very much something to hope for in the future when I was a kid. We walked everywhere! We walked to school, we walked to the shops, we walked to meet friends, And to add to this insult, I had parents who loved to go for long, (really long), walks in those days. I can’t describe how far they could walk on a Sunday afternoon, because most of you wouldn’t have any idea of the area I was describing, but to a lazy kid of 10 or so, it was murder. And they used to insist that I went with them – always! I’ve had a hatred for long, pointless walks ever since. The rich kids had bikes of course and some adults owned cars, if they could get the petrol to use them, but the great majority of us walked locally, and caught the, (often infrequent), train or bus for longer trips. Again, we are spoiled today, with myriad forms of transport available to us, but I’d have to say, at least the wartime walking was another factor that kept us healthy and slim!

Yes, we and our parents really had a lot to put up with during the war; they’d have looked on wearing a mask for a few weeks as a doddle, and not being able to go out at night, well that was just the norm for most people, except fire-wardens, police and the military of course, and that went on for five wearying years. As we pompously say now, to the younger generation, “You’ve never had it so good!”

Do you agree with Brian?