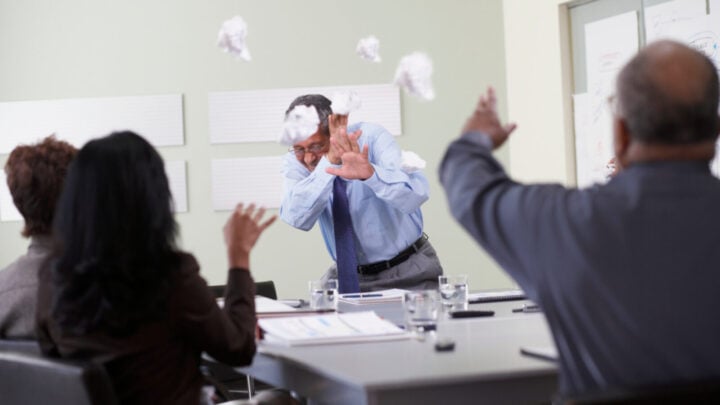 One of the most unfathomable situations I’ve come across in my 85 years of wandering about this lovely old world of ours, is the animosity many working people have for their ‘boss’ and all he or she stands for. I’ve lost count of the number of people I’ve heard saying things like “all bosses are bastards” or “bosses are useless – all they do is milk us to fill their own buckets”, and many other such phrases. It’s as if somehow bosses are from another planet, sent to destroy all us ‘working class’ folk. And for what purpose?

There are several things people seem unable to take into consideration when this subject comes up, and these things are purely logical if they’d only stop for a second to consider them. First, and to my mind most important, there is the fact that if there were no bosses, there would be no jobs. It is these people who have had the courage to go out and set up a business in the first place, very small at first no doubt, but with hard work and a little luck they have made a success of it and the product or service they provide is now too much for one person to handle so they offer work to others. This helps them fill their money bags faster of course, but let’s face it, that’s what you go into business for! And even the people who are taken on to help create that success are only there because they want money in their pockets too – nothing wrong in that! And, don’t forget, most bosses started out as employees just like you before they decided to go it alone, on their own merits and with the confidence that they could do better for themselves.

Secondly, imagine a situation where the boss of a company passes away, or something similar, and the shareholders wish the company to continue operating under an experienced present employee. This would mean one of the ‘workers’ would need to step up to fill the gap, to keep things moving, to organise whatever might be needed and to control finances so the business could grow and wages could be paid until profits started arriving again. So that worker, who may have been your friend for 20 years, is suddenly your boss and thus a member of the “enemy camp” – how ridiculous is that? Same person, same employment but because they now have authority over you they are no longer your friend, even though they are accepting responsibility for your financial welfare?

Remember, any employee in any company can decide to ‘go it alone’ by leaving their present employer and setting up their own business, thus making them ‘the boss’ in the eyes of anyone they might take on to help run the business. But a good boss, if they have any common sense, looks after their employees, as they are far too important to success to be treated badly.

Now I know there are some employers who don’t look after the workers, but in my experience they suffer in the long run, either with a broken business or because of a reputation that soon gets around. I had a boss like that for several years. He was well known as a bully and despite working as hard as he might, he eventually ran out of customers, money, employees and goodwill. Last I heard, he was living on the dole.

I believe the relationship between employer and employee is liable to be much more successful if both parties can manage to look at it as a partnership rather than a war. The former can be to the advantage to both, with the opposite effect in the latter. This, of course, is just my point of view based on my logic, and there may be no one who agrees with me! What do you think?

Do you agree with this? Have you had mostly good or bad bosses over the years?