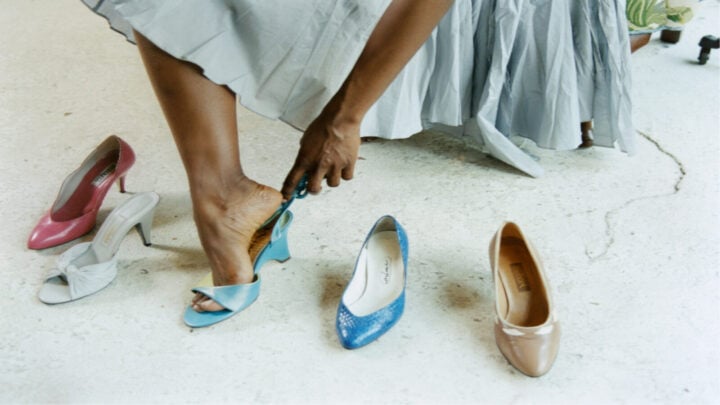 A trip to the shop used to look a whole lot different. Source: Getty

Last week, I went to the store and I was flabbergasted at the exorbitant prices being charged for a number of items. The newspaper said that there was a sale going on, but once I made it inside, I soon realised that the market was up to it’s old shenanigans and that the nincompoops who worked there were full of malarkey.

Because while so many people in the store had fallen for the ad, all the brouhaha made me not want to lollygag around, so I decided to look for a few more items before heading home. What was the thingamajig my husband told me to buy? Surely it’s not this doohickey? I felt like such a nincompoop, and totally discombobulated because I couldn’t remember what he wanted me to bring home. The market was a mess, and because I also felt bamboozled, I decided it would be best to skedaddle out of the store and shop someplace else. I could always try again tomorrow.

When I got home, my teenage daughter told me that she needed to get out of the house. Thankfully, she offered to go shopping for me. I was pooped! I gave her the keys to my car and told her to be back before dinner. She winked at me and sped off down the street. “Thank God Mum gave me the car,” Barbie said to herself. “She’s so square and such a dingbat! All they want to watch is Father Knows Best and The Match Game.” As Barbie continued driving, she was distracted by a nearby shopping mall. “What’s that nifty little store over there? It looks like it has all sorts of knickknacks.”

Barbie headed for the entrance, checking her page-boy in the rear view mirror and applying some lipstick. “It’s so boss going into a store that I’ve never been into before,” she said to herself.

In Barbie’s quest for adventure, occasionally she would indulge in a little bit of shoplifting. It wasn’t much, just a few things from time to time, but not enough to get her thrown into the hoosegow. It was relatively harmless, and besides, it was a nice diversion from being with her parents. She went down aisle three, and what she saw was outta sight. It was just small enough to confiscate, so when the clerk wasn’t looking, she slid open her pocketbook and dropped the item inside. She quickly left the store and jumped into her car. “What a bitchin’ afternoon!” she said to herself as she headed for home.

“Did you get the groceries?” I asked when she walked through the door.

What was your favourite store to visit as a kid?