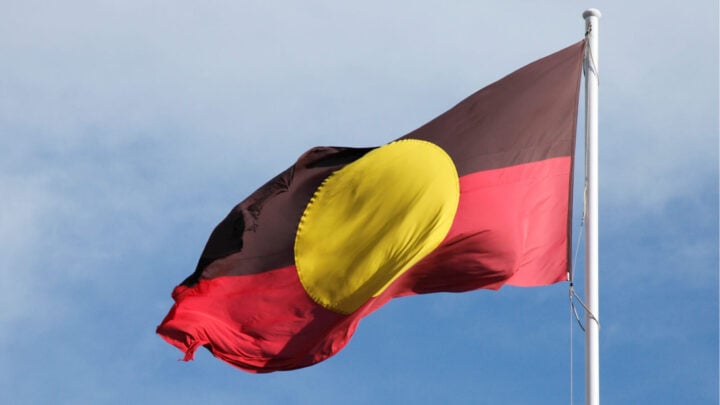 Copyright of the flag was sold to two non-indigenous Australians in 2018. Source: Getty.

The 9th round of matches in the AFL premiership season has, since 2007, been known officially as the Indigenous Round. And it’s nice to see the round attract more than the usual news coverage; but it’s not nice when the coverage this year is for all the wrong reasons.

In the indigenous round, all 18 clubs in the competition wear sensitive variants on their own traditional colours to highlight the deep, historic indigenous linkages to what is our major winter sport. Furthermore, the uniqueness of the event has never been overlooked in a competition still sorting out its sheep and goats at this near-halfway point in the season.

This year, however, things have turned out rather differently, with the Covid-19 pandemic severely truncating the season so that the indigenous round is not happening in that mid-season ebb and flow but near the business end of the season where every win and every loss can mean a 2020 finals berth or a rueful “better luck next year, chaps”.

Overshadowing the 2020 competition round was the discovery during the past week that one of the few truly recognisable national icons – the black, gold and red indigenous flag, actually belongs to a pair of non-indigenous Australians. Well, that’s not quite true; it doesn’t mean that if you wave an indigenous flag you’re going to get a dawn visit from the storm-troopers demanding a “please explain”.

Rather, what it means is that you can’t use the indigenous flag in any reproductional way, such as on a line of T-shirts, without the permission of the copyright holders. Which means, in reality, that you pay them for the privilege of reproducing something that you thought in your naivety was a symbol of aboriginal culture and history, not commercial advantage.

And what a strange history it was that lead to this stoush. It seems that the indigenous flag was designed by a gentleman named Harold Thomas, way back in 1971, and later, in 1998, I think, his copyright as the creator and therefore owner of the design, was upheld by the High Court in Canberra. Fair enough. But then, in 2018, Mr Thomas sold his rights to the flag’s design to this pair of non-indigenous Australians for, I assume, a sum of money plus a share of any future income earned from those who pay the copyright holders for the use of that design. In my opinion, a little less fair enough.

And this is where the AFL indigenous round enters stage right. The AFL tried to reach agreement with the copyright holders to use that flag’s image projected onto the turf of the playing field, something quite within the expectations of virtually everyone who thought for a moment about the indigenous round and its significance, but…

But, lo and behold, the AFL could not reach a financial agreement with the copyright holders to use the image so, at the time of writing, there would be no indigenous flag logo emblazoned on the hollowed turf. Perhaps it will be resolved at the eleventh hour; and perhaps it was more about the parlous state of AFL finances in a Covid-ravaged season than a matter of outraged principle.
But I can’t help wondering whether the time was right, with such a mini-season so damaging to the AFL, for the copyright holders to drive the hardest of bargains. Who knows.

But, surely the important issue to consider, for all the seasons to come and for the many other interests who have attachment to our national symbols, is whether it is appropriate that such symbols can be owned as private intellectual property, no matter how well-intentioned the holder. Many indigenous sportspersons don’t believe so, as some notable figures, like Olympic gold medallist Nova Peris, are up in arms over the whole AFL issue.

Yet, any study of the legal position is unlikely to provide a satisfactory answer. While the 1995 Flags Act of the Australian Parliament recognised the significance of the black, gold and red flag as a symbol of indigenous identity, it said two other things. One, that no permission is needed to fly the flag, but that for other purposes the rights of the copyright holder cannot be infringed. So, where does that leave us?

It leaves us in the Medusa-like entanglement of the copyright law, which is commercial law, and in which no spirit beyond the adversarial and commercial has any place.

While some may say, so what? — the Australian flag appears on many things of a promotional nature and we are not diminished as a people because of it. Indeed, I am quite sure that if push came to shove, the Federal government would say that it must help our national identity to have the flag displayed in as many spheres and places as possible.

And I am equally sure I have seen packaged food in my local supermarket aisles embellished with the Australian flag symbol (margarine and peanut butter ring bells); and I’m just as sure their owners didn’t pay for its use.

The only body that I can recall whoever acquired copyright purportedly in the national interest, was the Australian Olympic Committee when it bought the Boxing Kangaroo in 1989 from Alan Bond’s America’s Cup yachting syndicate. And you can understand that, because it was a good symbol, associated with a real victory on a David and Goliath scale.

And, with many, highly expensive Olympic games teams to fund, in perpetuity, the AOC would not be happy to see a few sharp operators cream off any profits. But the present copyright holders of the indigenous flag? What great outlay did they make in the national interest that would entitle them to seek some recompense? Nothing that I can think of.

Yet, the key question in this row is not that the use of national symbols should not be controlled – after all, the right to award the military service medals that your father and grandfather wore is solely held by the Department of Defence, not the Australian government, and not even the Administrative Appeals Tribunal has any right to go there.

While no private citizen could buy the copyright to the Australian national flag and charge for the use of its image, another flag – the indigenous – also recognised in the 1995 Act of Parliament, is allowed to be treated like a doormat. No wonder the minister, Ken Wyatt, squirmed when grilled about this absurd situation on television.

If I had been him, I would have said I’ll take the matter to Cabinet, post-haste, with a proposal for the Commonwealth to buy back the copyright, at whatever the cost. And then let the AFL get on with giving us an entertaining and respectful round of footie.