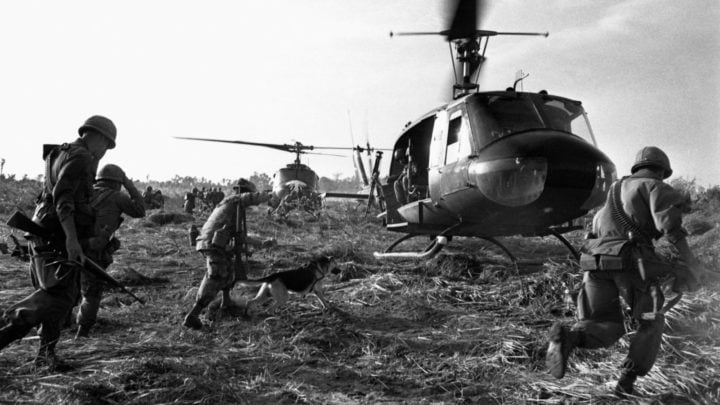 Mary had a chance meeting with a Vietnam veteran. Source: Getty Images

The waiting room of the orthotic and prosthetic place was already crowded. They were running behind, so we had to push our wheelchair up the ramp and squeeze between four other patients who were also in need of assistance.

When you’re laid up, it’s easy to make friends with people who have similar afflictions. I imagine it’s kind of like going through the war together. Your point of reference is similar with your challenges and frustrations.

I’m curious by nature, so I started up a conversation with a woman who was waiting for her husband. People down in Florida are relatively friendly, and are not glued to their phones as much as they are in Los Angeles. She seemed eager for conversation, and so was I.

And then her husband emerged from the interior of the office. He sported two prosthetic legs, looking a little bit like a snowy egret, with his white hair and thin metallic legs.

I have never been one to look at people like this with uncomfortable silence. I know from my years as a volunteer at a senior centre, that when you are disabled, the last thing you want to do is be treated like you’re some sort of a leper. I stepped right up.

“Boy, you sure are bionic!” I began. His wide grin showed me that he was glad I made him feel included and not like some sort of an alien.

Gingerly, he sat down. We began chatting, and in the course of our conversation he told me that he had not only endured diabetes, but that he was also the victim of Agent Orange from his years in Vietnam.

I remember hearing stories about Agent Orange when I was in college during the Vietnam era. I seemed to recall that it was like DDT, in that it was a poison, killing everything in its path.

Of course the government never tells you that the side effects of Agent Orange often reveal themselves much later. That’s not in the military brochure used to persuade you to enlist.

“The effects of Agent Orange don’t usually manifest themselves until you are in your 60s,” he explained. He was 75.

I had no idea what that meant, but my imagination made me wonder what was going on with his internal organs as well. He was an innocent example of what happens to people when they believe the government has your best interests in mind.

His face was clear, with beautiful blue eyes and wide grin exempt from any wrinkles, age spots or any of the skin maladies that plague most of us. It’s almost as if somebody had taken a small, smooth white cloth and erased the history from his face.

His wife then showed me her phone displaying another pair of prosthetics that he owned, Harley styled. They rocked. Blue, yellow and white flames adorned his tricked-out trike motorcycle equipped with manual controls.

He was there to get another pair. Apparently they attached to his stumps with suction enabling him to walk. I was fascinated, and he was glad to explain how everything worked.

Here we were, engaged in a moment in time. I was here to get a knee brace for rehab purposes and he was there to continue his legless journey.

He didn’t seem bitter. He didn’t seem angry. This is where he was — alive, curious, without guile and making the most of the situation.

As I rolled away in my wheelchair with my new brace, I caught a glance of him in the doctor’s office, with his two stumps on display as evidence of his journey. I looked at my partner and my brace, and felt grateful for this moment in time and this chance meeting with a real war hero.

Who is your war-time hero?