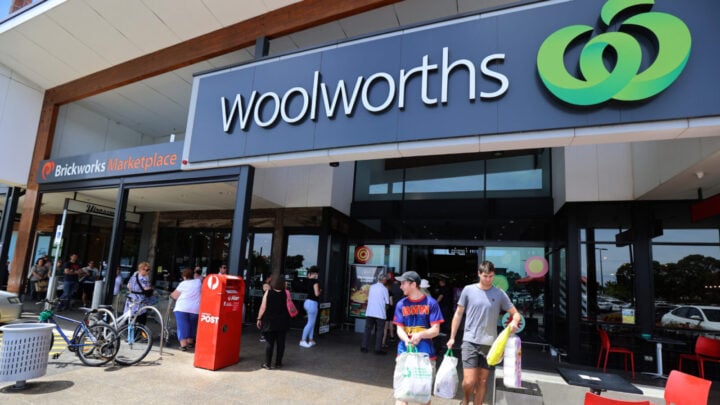 Woolworths is ending its cashless trial at 14 of its Metro stores after eight months. Source: Getty

Woolworths has announced it is re-instating cash payments progressively from Wednesday* at the 14 Metro stores across Sydney, Melbourne and Brisbane that had been trialling electronic-only payments.

The cashless payments began in early July last year at Metro stores in Melbourne and Sydney, with the retailer expanding the trial in the months following to include more stores in more locations, including Brisbane in early January.

The trail was initiated in response to the broad push for contactless payments around the country, amid heightened concerns about cash handling during the pandemic. (Researchers have found that it’s possible – but unlikely – that handling cash could transmit Covid-19.)

The cashless Metro stores made up just 11 per cent of the 81 Metro stores in the network, according to Woolworths, but the move received a swift and constant backlash from shoppers, who felt cashless payments unfairly disadvantaged vulnerable members of the community. Many also had privacy concerns about data being collected on purchasing habits.

Another tweeted on January 17, “How will grandparents give the classic gift of cash in a card? … How are buskers and homeless going to make a buck on the streets? Kids with pocket money wanting to spend at the shop? No Woolies, this isn’t progress for good reason.”

And on February 10 one tweeted, “In Woolworths – man who is clearly sleeping rough unable to pay because cash is no longer accepted at Central Park. He was distressed. And then a Woolworths staffer who had finished her shift quietly paid for his food. The corporate head office needs to act like the staff.”

People also took to Woolworths’ Facebook page to express their outrage, with one writing, “We can’t allow that to be the way, our right to use cash slowly seeps away.” Another wrote, “This is getting so bloody ridiculous. They cannot refuse cash. They will lose so many customers.”

National Seniors Australia chief advocate Ian Henschke called the trial “a form of ageism” that disadvantaged older Australians. “These are people who grew up with cash and they feel comfortable with cash, it is what they want,” he said, according to the Sydney Morning Herald. “If I was an 89-year-old pensioner, why should I be prevented from shopping at my local supermarket?”

Woolworths Metro general manager Justin Nolan said that the retailer hadn’t “fully appreciated” the impact of cashless stores. “We want Woolworths to be a place where everyone feels welcome, no matter who they are or how they shop with us,” he said in a statement. “It’s become clear to us that not all customers have felt this way when shopping in our Woolworths Metro stores trialling card-only payments.

“While almost all Metro customers choose to pay with cards, cash remains incredibly important to those who don’t for a whole range of reasons we didn’t fully appreciate. Based on feedback from our customers, we can see we’ve moved ahead of current community expectations on cash and will be ending the trial.”

Henschke welcomed Woolworth’s backflip, saying it must have realised the value of millions of older Australians who “grew up with piggy banks, cash and cheques”. “These customers are important and their right to pay cash should be maintained,” he said, according to the SMH.

What do you think about Woolworths' backflip?