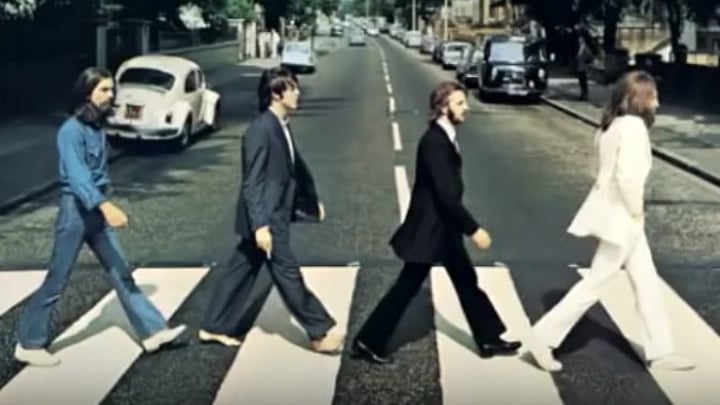 The iconic album was released almost 40 years ago. Source: YouTube/zinnbardo.

The Beatles’ Abbey Road album has one of the most iconic covers in music history, with fans regularly flocking to the London street to recreate the scene from the hit 1969 record.

But fans have long questioned why Paul McCartney is the only band member who is wearing no shoes in the infamous shot, which shows the Liverpool group strolling across a pedestrian crossing.

The photo even added fuel to conspiracy theories that McCartney had tragically died and been replaced by a body double, with people speculating that Paul was barefoot in the image to represent a corpse. While it was also suggested that John Lennon, dressed head to toe in white, represented God, Ringo Starr a priest and George Harrison a gravedigger.

Now, during a Q&A session shared on YouTube, the 76-year-old musical legend has finally answered the question – putting to bed rumours about why he opted to wear no shoes once and for all – revealing there was no ‘special meaning’ behind the statement.

“The thing was I turned up and, like today, it was a very hot day,” he said.

“I happened to be wearing sandals so I just kicked them off, because it was just so hot, and went across barefoot. There was no special meaning behind it – it was really hot.”

The Let It Be singer recently returned to the scene of the photo as he recorded his new album Egypt Station at the legendary London studio, and shared a video of himself crossing the road on Instagram, much to the delight of die-hard fans.

One fan described him as “the king”, while another wrote: “Paul Icon walking across Abbey Road this time wearing sandals, stops to give crowd a hello as only Paul McCartney can do.” (sic)

During the raw question and answer session the Liverpool-born star also revealed how the people and humour of his hometown in made him the man he is today and revealed his favourite memory of growing up in the Northern city.

“There’s really too many to pick one but I’ll pick one right out of the hat, which was meeting John at Woolton Village fete,” he said. “We used to hang out in John’s neck of the woods, or him and me would hang out at my house.”

He also revealed that the smell of Liverpool’s famous Albert Docks immediately reminds him of home, saying the scent of the “ferry across the Mersey smell” is “very evocative”.

It was also announced this week that unseen footage from Macca’s Carpool Karaoke, which saw him take James Corden back to Liverpool, will be aired in an hour-long TV special.

The emotional segment, which debuted in June, was watched by more than 130 million people on Facebook and YouTube, and saw the singer visit the house he grew up in, the barber shop on the infamous Penny Lane and he even surprised a pub full of Scousers with a special performance.

Are you a fan of The Beatles? Did you buy this album when it was originally released?