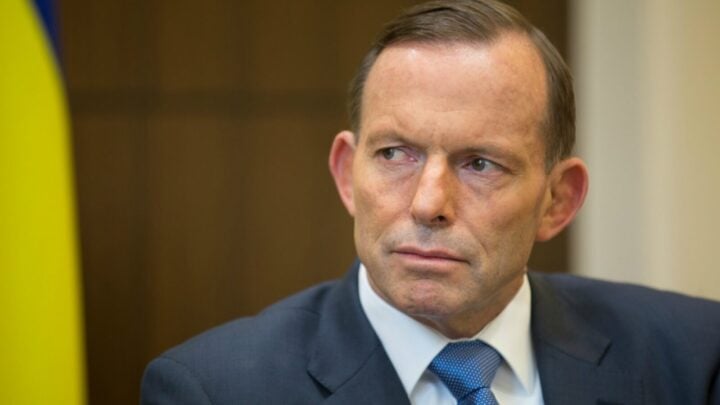 Everyone's talking about Tony Abbott's travel exemption to visit the UK as part of a new role. Source: Getty.

Former Prime Minister Tony Abbott has divided the internet after he was granted an exemption from Australia’s ban on international travel to visit the UK as part of a new role. The former pollie has been appointed joint president of Britain’s relaunched Board of Trade, news.com.au reports, and flew out to London this week to accept the job offer.

But Aussies everywhere are less than impressed with the decision, with the majority saying he “should have the same rules imposed on him as the rest of us”.

One commentator wrote on Facebook: “There’s a way around everything if you have cash and connections. Imagine how those who were refused [to] travel on compassionate grounds are feeling.”

While another added: “It’s always one rule for one and a different rule for everyone else. Personally I’m sick of the double standard.”

“First an entrepreneur with Morrison Government connections gets a travel ban exemption to pick up his yacht in Italy,” she wrote on Twitter. “Now Tony Abbott leaves for a breakfast meeting about a plum foreign government job. But other Australians can’t visit dying relatives.”

Other Twitter users commented on Wong’s post, with @Ria_Oxburgh writing: “This makes me so, so angry. My friend was refused permission to travel to her father’s funeral in the UK. But international travel for Tony Abbott’s job interview is essential. The hypocrisy is boundless.”

While @tlc152 said her niece and partner can’t come back from Belgium due to the cap on Aussies returning home. The government decided to halve the number of arrivals in Australia in July.

It comes after a Sydney businessman was granted an exemption to pick up a luxury yacht in Italy. According to the The Sydney Morning Herald, Jost Stollmann, the former chief executive of ASX-listed Tyro Payments, was granted an exemption to leave Australia at the end of May and is now “waiting out the pandemic on board his yacht in the Greek islands”.

Under the government’s current laws, if you are an Australian citizen or a permanent resident you cannot leave Australian due to Covid-19 restrictions unless you have an exemption.