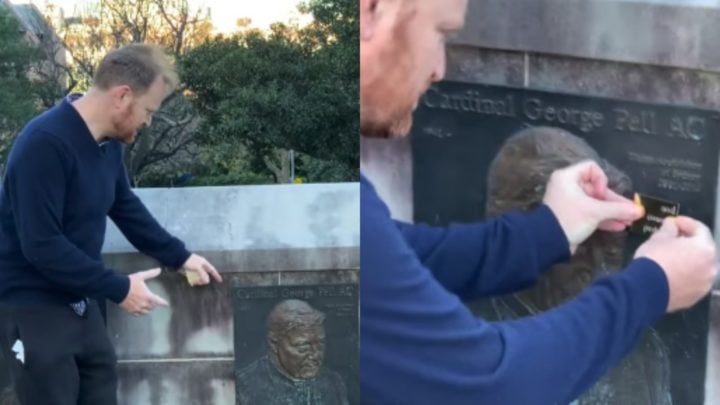 The Chaser boys are never ones to shy away from controversy and they’ve now taken aim at disgraced Cardinal George Pell in their latest spoof. In the wake of the Victorian Supreme Court’s decision to dismiss Pell’s appeal on Wednesday, one of the comedians from the Australian satirical comedy group visited St Mary’s Cathedral in Sydney, where a plaque dedicated to Pell is on display, and added the cardinal’s “most noteworthy achievement” to the plaque.

In a video shared to the group’s Facebook page, comedian Charles Firth can be heard saying: “We’re here at St Mary’s Cathedral. Here’s George Pell’s plaque proudly on display and yet it’s missing his most noteworthy achievement! So, I’m going to have to fix that.”

He then attaches a gold plate engraved with the words “and convicted paedophile” to Pell’s controversial plaque. “There we go, much better!” he adds. The Chaser boys captioned the Facebook video: “We visited St Mary’s Cathedral this afternoon and noticed a plaque was in serious need of updating.”

Many social media users were quick to congratulate the comedy group on their latest spoof, with one user commenting: “Generally I don’t applaud vandalism, but I can make exceptions in this case.” Another added: “I hope all victims see this, and feel some joy in seeing we all stand with you.”

Meanwhile, a third wrote: “Excellent! Hope you used superglue.” One social media user applauded their efforts and labelled the popular comedy group “national treasures”, while another commented: “You are my [heroes] for doing this – love your work.”

The controversial video comes after coveted news presenter Andrew Bolt threw his support behind Pell claiming he’s “shocked and appalled” by the decision by the court to dismiss his appeal. Speaking on Sky News the 59-year-old spoke openly about his thoughts on the guilty charge against Pell for the sexual assault of two choir boys shortly after the decision was handed down on Wednesday for him to remain behind bars, congratulating the one judge who said he would have acquitted the Cardinal.

Bolt said he was not satisfied beyond reasonable doubt that Pell was guilty of the crimes and that he should not remain in jail. “I have to congratulate Justice Mark Weinberg for being that judge who did stand against all that, did look at the evidence and say no he couldn’t believe that George Pell could be convicted on reasonable grounds,” he explained on Sky News. “I am shocked, appalled, disappointed, that that judge was outvoted by two others and that Cardinal George Pell will remain in jail.”

Bolt’s comments follow news on Wednesday that Pell’s legal team confirmed they are not giving up and will take the case to the High Court. A statement was released by Pell’s representatives just hours after the Supreme Court of Victoria handed down its decision to dismiss the cardinal’s appeal, explaining that he maintains his innocence.

“Cardinal Pell is obviously disappointed with the decision today,” the statement, which was shared widely online, read. “However his legal team will thoroughly examine the judgement in order to determine a special leave application to the High Court. While noting the split 2-1 decision, Cardinal Pell maintains his innocence. We thank his many supporters.”

The statement came on the same day that 78-year-old Pell lost his appeal, meaning he will continue to serve his sentence of six years imprisonment. It was also confirmed that he will become eligible for parole after three years and eight months.

During the hearing on Wednesday Chief Justice Anne Ferguson explained their reasoning behind dismissing the appeal. She told the court after examining the evidence presented throughout the trial that it was open to the jury to be satisfied by reasonable doubt that cardinal pell was guilty. Further to this they rejected all 13 of the reasons Pell’s lawyers said the cardinal could not have carried out the abuse of the choir boys. This included that the robes Pell was wearing at the time of the crime were capable of being manoeuvred in a way that they could be pushed to the side to commit the abuse.

Prior to yesterday’s court appearance, the 78-year-old spent almost six months in prison after being found guilty of five counts of child sexual abuse late last year. The cardinal was convicted of the charges on December 11, 2018 at Melbourne’s county court, following a unanimous verdict from the jury. He was found guilty of sexually penetrating a child under the age of 16, which the victim’s lawyer reportedly likened to “oral rape”, and four charges of an indecent act with a child under the age of 16.

Have you been following this story? What are your thoughts on The Chaser boys video?