Tamil family from Biloela to be granted visa extension 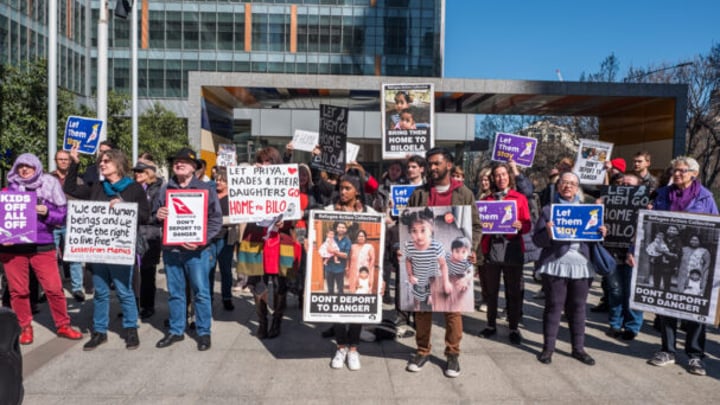 Protestors gather outside Court in support of Tamil family, all holding placards in support. Source: Getty

The Tamil family from Biloela – Priya, Nades, Kopika and Tharnicaa Muruguppan – can breathe a brief sigh of relief today, after being granted an official opportunity to extend their bridging visas.

The family’s current visas are due to expire on Wednesday, September 22nd, 2021.

Immigration Minister Alex Hawke intends to extend the visas of parents Priya and Nades, and eldest daughter Kopika next Thursday, the day after the visas expire. To receive the extension, Hawke will direct the Muruguppan’s to enter “administrative detention” as the visa processes. Hawke clarified to the Federal Circuit and Family Court that this form of administrative detention does not actually put the family into a detention centre. Rather, the family will visit Mercy Care, where the visas will be issued. Upon reception of these visas, the family will be allowed to work and study on the mainland, as their legal battle to stay in Biloela continues.

However, youngest daughter Tharnicaa will not have her visa renewed. Tharnicaa’s visa status has been predetermined by the High Court, after a ruling in August which refused a special leave request. This refusal has stopped Tharnicaa from having the chance to apply for protection visas, as the rest of her family has.

The Muruguppan’s have been fighting against being deported since they were removed from their home of Biloela in 2018. A Facebook page, Bring Priya, Nades and their girls home to Biloela, has been created by friends of the Tamil family to support them through this long process.

Both Priya and Nades arrived in Australia as asylum seekers separately, fleeing Sri Lanka by boat. Despite being labelled “unlawful maritime arrivals”, they were both granted bridging visas and allowed to settle. They both independently chose Central Queensland as their new home.

It was in Biloela, as workers at the local meatworks, where they met and fell in love.  Before deportation, the family lived harmoniously in Biloela, in Central Queensland. Being a part of the Biloela community for years, parents Priya and Nades worked, made friends, and eventually grew their family, welcoming Kopika in 2015, and Tharnicaa in 2017.

In 2018, they were removed from their home in the dead of night and taken to Christmas Island’s immigration detention centre.

Both Priya and Tharnicaa have experienced medical issues since entering detention.

Have you been following the Biloela family's story? What are your thoughts?