Right to stay? Fierce debate heats up over deportation of Tamil family 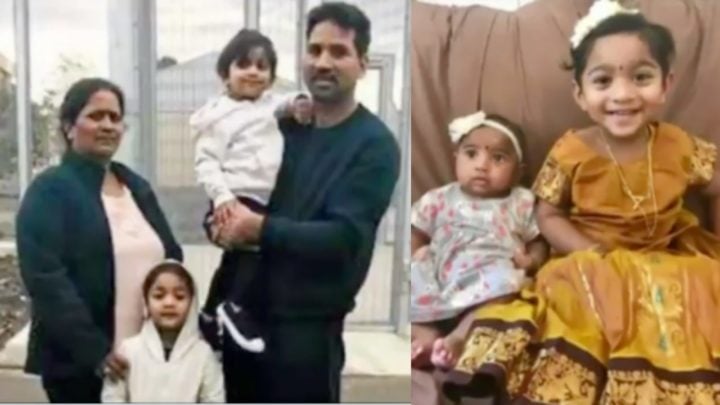 A Tamil family could be sent back to Sri Lanka in coming days with Prime Minister Scott Morrison announcing he will not intervene in their potential deportation. Source: Twitter/ The Project

A Tamil family could be faced with deportation back to Sri Lanka in coming days, with a court hearing scheduled for Wednesday set to reveal whether or not they will be able to have a future in Australia.

The family of four, including mum Priya, her husband Nadesalingam and their two Australian-born daughters, were meant to return to their home country by plane on Thursday night from Melbourne after being removed from the Queensland town of Biloela late last year. But the deportation was stopped in its tracks when the family learnt mid-flight that they could stay in the Land Down Under temporarily with a federal court judge intervening and granting an injunction over the phone.

The plane was then diverted to Darwin and the family of four has since been transported to Christmas Island as they await their fate. The whole debacle has created a divide in Australia with some including Home Affairs Minister Peter Dutton claiming they are not refugees and therefore not owed protection by the country.

However, others such as the whole community of Biloela have protested against the deportation, insisting that the family have made a life for themselves in Australia and have contributed greatly to the town over the past few years. Major publications The Australian and The Sydney Morning Herald have gone head to head on the issue in their latest editorials with a debate over whether the family’s battle could re-open the boat issue.

On the side of the family, The Sydney Morning Herald argued that Dutton should use his ministerial discretion and allow the four to stay in the country they have grown to call home, claiming they are “equally deserving candidates”. The NSW publication said the decision to let them stay would not be undermining the border policy and that the home affairs minister had previously used his power to let others stay in the country.

While The Sydney Morning Herald made it clear that the parents are illegal migrants, they said this should be overlooked due to their years of hard work to integrate and settle in Australia. This view wasn’t far removed to that of Green’s leader Richard Di Natale who on Sunday called on Prime Minister Scott Morrison to intervene and pointed a finger at the government for apparently turning its back on the family.

“This is a family that has committed no crime, they’ve witnessed unspeakable cruelty in their home country,” he explained to Sky News. “Here is the opportunity for the prime minister to show some compassion and decency to do the right thing and let them stay.”

Although many Aussies are on the same band wagon, The Australian took the opposite stance and praised Morrison for deciding not to intervene in the deportation as Di Natale had suggested. Speaking out on Monday the Liberal leader said while he understood the feelings about the deportation from some of the Aussie community, there would be great consequences if he was to intervene and so action could not be taken.

“It’s not about the public mood, it’s about what is the right decision for Australia’s national interest to ensure that the integrity of our border protection regime is maintained,” Morrison told reporters in a press conference on Monday. “The worst possible thing we could do is … send a message of ‘you know what if you come illegally to Australia, and the courts say you don’t have a claim and the government says you don’t have a claim, then the government just might make an exception because there’s been a public reaction’.”

The Australian backed his comments claiming it would send the wrong message to people smugglers and re-ignite the boat issue of 2008, describing Labor’s decision to relax border controls back then as “fiscally reckless”. The publication commended Morrison in his then position as immigration minister for implementing the Operation Sovereign Borders, which stops the arrivals of asylum seekers to Australia by boat, and said if the Tamil family are allowed to stay it could create a “crisis in our northern waters”.

The Aussie public has maintained a divided opinion on the deportation with comments filling social media from those on both sides. Following Morrison’s announcement not to intervene on Monday one person slammed him on Twitter writing: “‘An invitation to people smugglers’, what a load of garbage from Morrison – a family about to be destroyed – they had settled in well and the kids were born here. They were wanted by their community – our PM is a cruel nasty type. Embarrassed to be Australian.”

While another replied to Di Natale’s message to Morrison to show compassion and let the family stay writing on Twitter: “Are you suggesting that we ignore the legal processes that have been followed in determining there status? That the law is wrong? To actually break they law? They knew on the boat they were illegal and having to kids doesn’t change that. Which is why they had them. They go back!”

Do you believe the Tamil family have the right to stay in Australia? Or do you think they should be sent back to Sri Lanka as it will reopen the boat issue?