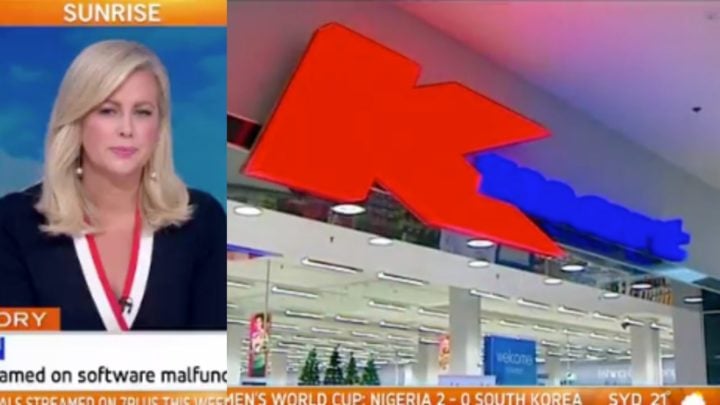 Sunrise host Samantha Armytage has slammed Kmart in an angry outburst over an apparent “glitch” in their system which banned people from using words such as “church”, “Jesus” and “God” on their photo kiosk.

The television presenter targeted the popular store during a segment of the morning show, following reports customers were unable to caption their photos with particular religious words as they were deemed “profanities” and replaced with asterisks, according to The Daily Telegraph.

While terms related to Christianity were not allowed, further words including “Islam”, “mosque” and “Koran” were reportedly accepted.

Kmart has since spoken out with an explanation for the issue, claiming it was simply a “software issue” and was not intentional.

However, this hasn’t sat well with Armytage who claimed it was a “rubbish” excuse, while social commentator Jane Caro said the store just needs to apologise for its mistake.

Kmart is under fire for banning words 'Jesus' and 'Church' on their photo kiosks while 'Islam' and 'Mosque' are OK. pic.twitter.com/qgSiuWdNpr

“They just have to say wow, stupid, sorry, we fixed it, we didn’t mean to give anybody offence,” Caro claimed.

To which Armytage chimed in: “They have to beg for forgiveness to whichever God they beg to.”

The host isn’t the only one to disregard Kmart’s explanation of technical malfunction, with many people taking to social media to express their thoughts on the situation.

“#Kmart can’t get away with calling this a glitch. A full explanation is required,” one person wrote on Twitter.

“Glitch, not likely. Fix it now and apologise. I’m sick of all this religious stuff,” another added.

While a third said: “A glitch… it’s humans who program the software!”

The issue was first raised when a couple was attempting to print photos at the store from their Sunday church gathering. Anthony Dorsett and his wife Marelynda were trying to add the words “church” and “Jesus” as captions when they were stopped in their tracks, The Daily Telegraph reports.

Speaking to the news outlet about the issue, Anthony said his wife was offended and upset by the mishap.

“She thought it was a bit disgusting though,” he explained. “We go down to this Indonesian church about three times a year and she used to send the photos back home to her dad before he passed away. So the whole thing did upset her.”

However, Kodak Sales and Marketing Manager Gavin Wulfsohn told The Daily Telegraph it was a “complete error”, blaming new profanity detecting software for the malfunction.

Do you believe the banning of Christian terms was a computer glitch? Would you have been offended by the supposed error?