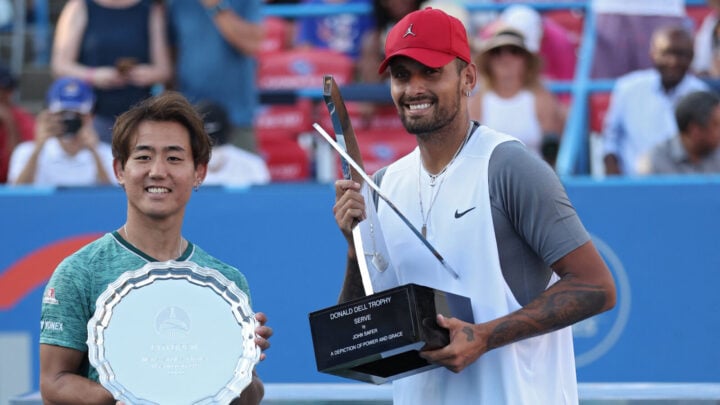 Nick Kyrgios has landed his seventh ATP title, winning in straight sets against Japan’s Yoshihito Nishioka in the Citi Open in Washington on Monday, August 8.

The tennis diva’s 6-4 6-3 win has seen him go from number 63 to 37 in the world rankings, in a game involving two unseeded players in a tournament first.

Kyrgios is King in DC ????????@NickKyrgios becomes a #CitiOpen champion for the second time as he defeats Nishioka 6-4, 6-3 to take the title! pic.twitter.com/XCGLRNogZb

The Citi Open champion said he’s proud of his efforts, in an incredible tournament where not a single serve was dropped.

“It’s just very emotional for me, to see where I was that last year to now, it’s just an incredible transformation,” Kyrgios said.

“I’ve been in some really dark places.

“I’ve shown some serious strength to continue and persevere and get through those times and win tournaments like this one.”

Nick Kyrgios secured his place in the Citi Open final in Washington after an incredible serving display against Sweden’s Mikael Ymer in straight sets.

Beating Ymer with 7-6 (7-4), 6-3, Kyrgios guaranteed his win without a single break point against his opponent, finishing with an impressive serve-volley.

Kygios said he was thrilled with his performance, marking the Australian’s fifth semi-final debut in the past six events.

“I’m just happy to be in another final,” Kyrgios said.

“I didn’t get to sleep until 4.50am. I had so much adrenalin. I ate some dinner, got some treatment and just my body was so sore after last night.

“It was an epic battle [against Tiafoe]. I didn’t really do much today and I felt like my energy was a little flat today early on.

“It’s understandable – I’m only human – but my adrenalin for the final is going to be right there. I’m super excited for it.”

The Australian athlete recently opened up about his struggle to get back on the court after his Wimbledon loss to Novak Djokovic in July.

“It took me a while to get over that loss,” Kyrgios said as per The Courier Mail.

“Ever since I picked up a racquet, that’s always been the goal that I was told, (make) a Wimbledon final, a Wimbledon championship, that’s … the highest accolade you can achieve.

“And I was so close I almost tasted it. So it was really hard for me to stomach that loss but I feel like I’ve done everything I can to bounce back, I’ve been training hard, my body’s feeling good and I’m serving great, so we’ll see how it goes.”

Kyrgios was robbed of his chance at being number 15 after the ATP stripped Wimbledon ranking points in protest of the All England Club’s banning of Russian and Belarusian players in relation to the invasion of Ukraine.