Good news! South Australia is opening its borders to three states from tomorrow 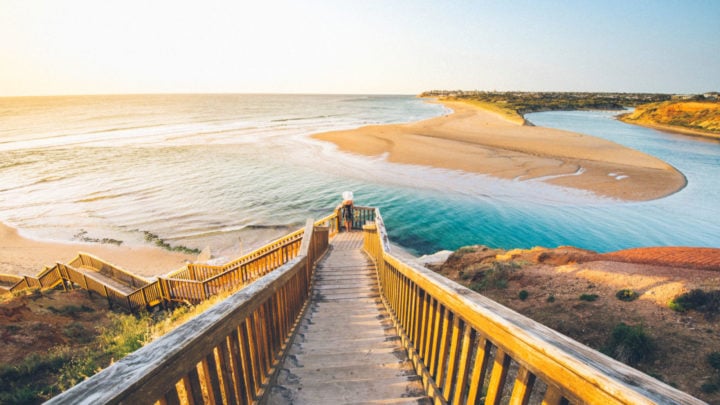 Travellers can once again visit the likes of Port Noarlunga in South Australia. Source: Getty.

Over the past few weeks restrictions have begun to ease across Australia as the number of active Covid-19 cases continues to drop, however the decision to lift state border restrictions has been delayed until the final stage of the government’s three-step plan.

However one state is now preparing to buck the trend, as SA Premier Steven Marshall announced on Tuesday that the state would reopen its borders to visitors from three states and territories as of midnight tonight. This means that travellers from Tasmania, Western Australia and the Northern Territory will no longer be required to spend 14 days in self-isolation upon arrival in South Australia.

“It’s important for me to point out, this doesn’t mean those jurisdictions have lifted their borders for South Australians going into their jurisdictions. So what we are effectively doing is removing the border on our side. That means that we should see more people travelling into South Australia.”

There are caveats however, as the travel must be direct, meaning people cannot travel between states before arriving in South Australia. The premier also pointed out that anyone who is currently completing 14-days self-isolation, from Tasmania, WA and the NT, will no longer be required to complete their full two-week stint and will be able to move freely again from midnight on Tuesday.

Marshall went on to say that the SA government is also currently considering allowing visitors from Queensland to enter the state, however a decision has not yet been made. This is expected to happen later this week, or perhaps early next week.

The decision comes just days after Prime Minister Scott Morrison doubled down on the National Cabinet’s plans for state borders to remain closed under the country reaches stage three of the roadmap to easing restrictions, which is expected to take place in the second week of July.

“The plan wasn’t [to open borders] by July, it was in July,” Morrison said on Friday, before adding that all states and territories are likely to stick to that plan, with the possible exemption of Western Australia. Morrison again pointed out that the issue of domestic borders is entirely up to the individual governments.

Are you looking forward to travelling again?