Sign of the times: Auslan interpreter’s cr*p day at work 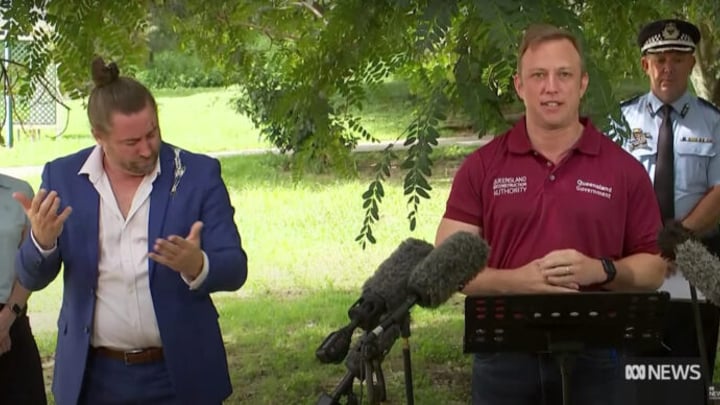 The ever-professional interpreter took his jacket off, cleaned-up and proceeded as normal. Source: YouTube/ABCNews

A Queensland Auslan interpreter received a stroke of good luck on Thursday, March 9, after an owl let one fly on him during a press conference held by Premier, Annastacia Palaszczuk.

Auslan interpreter Mikey Webb found himself in quite the ‘crappy’ situation after a presumably large owl left a rather juicy present on his jacket shoulder.

Webb was heard uttering a profanity as he reacted to the pitiful surprise.

“Oh no,” Palaszczuk said, sympathetically, before asking around for tissues.

Webb has long been a silent and loyal interpreter for Queensland press conferences, making for a rather unfortunate victim of the unwelcome ‘shit-uation’.

Despite the unexpected state of affairs, Webb simply ditched his jacket, wiped his face off and proceeded work as normal – the picture of a true professional.

Palaszczuk took to Twitter later that day to post a series of images from the incident, showing Webb, jacket-less, wiping the owl’s contents off himself.

The Premier admired Webb for his professionalism, revealing the culprit of the surprise to be an owl – a fact that had not yet been established.

Nothing stops our fabulous Mikey.

By the way, it was an owl ???? pic.twitter.com/QPiqai5JSx

Queensland Police also took to Twitter to make light of the incident, writing “Can confirm police have launched an investigation into this fly by hooting.”

This isn’t the first time a bird has surprised viewers in Queensland, with a 2011 fishing segment on live television going horribly wrong.

Stefanovic had jokingly given Burt “once chance” to catch the potential shark before Burt cast his line out, only to reel in a very large……bird!

Stefanovic and co-host at the time, Lisa Wilkinson, were left in shock, struggling to contain their laughs at the interview gone wrong.

The video of the broadcast has since seen over 14 million views on YouTube.

In 2018, Karl was left in stitches once more after another unexpected animal-related incident took place on live television.

He had been interviewing weatherman Steve Jacobs at the time, as Jacobs demonstrated a giant rooster.

An unsuspecting Jacobs was describing the animal when it made a rather aggressive attack on the presenter, with Jacobs dropping the animal and running away in mock fear.